At last, after all the speculation in the gaming community, Nintendo finally put the "p" in period with regards to the Nintendo 3DS at E3. Says IGN: 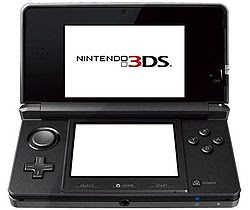 Nintendo confirmed the name of its 3D handheld system, calling it the Nintendo 3DS at its E3 2010 press briefing.

Downloadable titles will be available at launch, and no glasses will be required to see the 3D effects. Shown off at the conference, the new handheld has a 3.5 inch widescreen display for its top screen with a smaller bottom touch screen. Nintendo says the unit will have improved graphical capabilities. It will also have an analog control input in addition to a D-pad and four face buttons.

Wireless Communication:
Can communicate in the 2.4 GHz band. Multiple Nintendo 3DS systems can connect via a local wireless connection to let users communicate or enjoy competitive game play. Systems also can connect to LAN access points to access the Internet and allow people to enjoy games with others. Will support IEEE 802.11 with enhanced security (WPA/WPA2). Nintendo 3DS hardware is designed so that even when not in use, it can automatically exchange data with other Nintendo 3DS systems or receive data via the Internet while in sleep mode.

Other Input Controls:
3D Depth Slider to adjust level of 3D effect (can be scaled back or turned off completely depending on the preference of the user), Home button to call system function, Wireless switch to turn off wireless communications (even during game play), Power button. The telescoping stylus is approximately 4 inches when fully extended.

Input/Output:
A port that accepts both Nintendo 3DS game cards and game cards for the Nintendo DS™ family of systems, an SD memory card slot, an AC adapter connector, a charging cradle terminal and a stereo headphone output jack.

Sound:
Stereo speakers positioned to the left and right of the top screen.

Parental Controls:
Parental controls similar to the Nintendo DSi system will be included.

The unit will feature a slide pad, a gyrosensor, and motion sensor on the handheld. It’s compatible with Nintendo DSi games. The 3DS has two camera lenses on the outside so you can also take photos with the 3DS and view them in 3D. The 3D effects are controlled by a slider on the unit, so in that sense they’re optional.

Nintendo also mentioned the 3DS will be able to display 3D Hollywood movies, from Disney, Warner Bros., and Dreamworks.

The hardware in the 3DS supports wireless communication regardless of what software is being played, and can access the web through Wi-Fi access points.