On some random news: 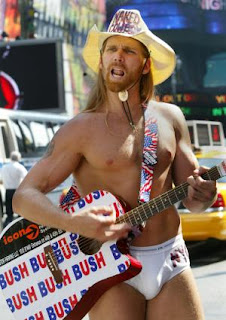 The Naked Cowboy, a fixture of New York's Times Square, is suing a "Naked Cowgirl" he claims is ripping off his street musician act.

Robert Burck, 39, who performs in only a cowboy hat, boots and briefs, is suing fellow Times Square performer Sandy Kane, who calls herself "The Naked Cowgirl," seeking as much as $150,000, the New York Post reported Tuesday.

Burke said Kane balked at his offer of a franchise agreement, which would require her to pay $5,000 a year or $500 a month to copycat his act.

However, Kane, who performs in a stars-and-stripes hat with a matching bikini, said she doesn't believe she should have to pay Burke at all.

"You know how much money I make?" she said. "Two dollars a picture. I'm not selling any products."

So when you're in NY and you see this guy, stand next to him and do a naked businessman act. Wait, why didn't the girl even think of that in the first place? She could've been the Naked Businesswoman. That way she'd earn a lot more (people have fetish with businesswomen) and not be sued by the Naked Cowboy.