The wait is over. The undisputed UFC heavyweight championship will be on the line when Brock Lesnar makes his long-awaited return to the Octagon to defend his world title against interim beltholder Shane Carwin in a clash of titans nearly a year in the making. 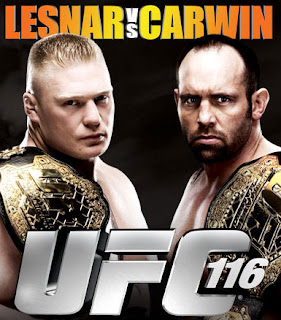 Carwin has destroyed each of his 12 opponents in less than a round; Lesnar has been just as devastating in his victories over Randy Couture and Frank Mir. When these two heavyweight giants meet in the main event of UFC 116 for the most prestigious title in mixed martial arts, don’t blink.

Also, international superstar Yoshihiro Akiyama, who is unbeaten since 2005, takes on Chris "The Crippler" Leben in what promises to be an action-packed middleweight bout. UFC 116: Lesnar vs. Carwin, Saturday, July 3rd, live on pay-per-view from Las Vegas, Nevada.

UFC 116 will be available live on Pay-Per-View on iN DEMAND, DIRECTV, DISH Network, TVN, BellTV, Shaw Communications, Sasktel, and Viewer’s Choice Canada for a suggested retail price of $44.99 US/$49.99 CAN for standard definition or high-definition broadcasts (where available).