I've been to SM Megamall today, and I don't know if its been there a month or not, but I noticed that there's already a DJ Max Technika machine over at Timezone. And I thought, "Finally."

DJ Max Technika, the arcade version of the DJ Max series from the PSP, has been around for some time now. Internationally, it's quite old. Like, two years old. But here in the Philippines, hey, it just arrived here (although Wikipedia says it was released here since July 2009). Like I said, finally.

So me being me, I took some pics with my shitty phone. So here: 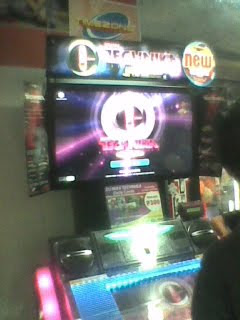 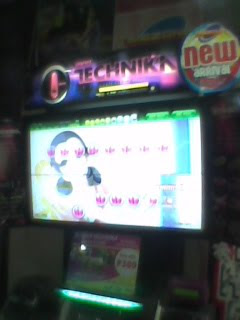 See the "NEW ARRIVAL" label on the top-right of the machine? If Technika was released here 2009, I should've noticed that a loooong time ago, considering I'm a Timezone frequenter.

Anyway, it's P32.00 a game (see: expensive). Each session let's you play three DJ Max songs, almost all of them familiar to long-time DJ Max players. You get ranked the same way: A, B, C, D, E, and F.

I played the game and I found it to be quite a task since you have to move your hands and your arms all the time touching the screen for random button placements. And, you have to time each press with the "swiper" bar (see: Lumines).

Being a long time DJ Max player (I played ALL the DJ Max installments in the PSP, including Hot Tunes), I was surprised that I got an F after finishing the song Remember (Black Square). I never finished with an F in the PSP, I never even tasted a D. After a month my regular percentages were 96% and up (6B). And to think that Remember was a fairly easy song in Black Square. When you think you know everything, something slaps the hell out of you and wakes you up back to reality.

All in all it was a lot of fun. Me and my girlfriend enjoyed it a lot. What I can say though is, besides the exorbitant price per game, I didn't enjoy the gyrating of the chunky males who played before us. Man. Huge dudes that gyrate to electronica beat? I mean, you don't see that everyday. And I gotta say, that's weird. At least for me.

Even so, I hope DJ Max Technika 2 will arrive at Philippine shores the same time it hits Korean grounds.