If you're an avid PSP gamer you might have heard the game Patapon. It's essentially a rhythm game in which you command animated tribe people (who love chanting apparently) into beating enemies by using spears, bows, musical instruments and what have you. Well, the Patapon franchise is in its third installment, aptly named Patapon 3. 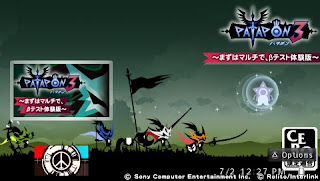 The demo is available on the PSN Store. It boasts a lot of improvements since Patapon and Patapon 2. Unfortunately it's going to be pulled out from the PSN Store this coming July 12, 2010. So what are you waiting for? Grab your copy now.

Don't worry, the game is legitimate. It's not pirated. It's an official download from Sony Japan. Anyway. I decided to post this for the benefit of those who doesn't have Wi-Fi to access the PSN Network.