Here's the story: Justin Bieber's "My World Tour" Twitter held a contest asking fans which country in the world, without restrictions, should Bieber go next. The infamous anonymous army from the 4chan boards then decided to launch a full scale attack to vote for North Korea as Bieber's next destination. Remember the "without restrictions" clause of the contest? Yeah. That's what they thought too.

It's now a question of Bieber honoring the contest or not. 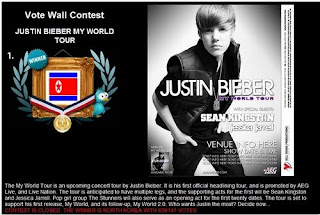 4chan is still the internet's hate machine. No doubt about it.