Pokémon Black & White Will Have Video Chat and Tag Mode 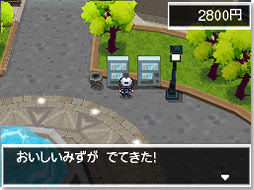 If you play Pokémon Black & White on a Nintendo DSi or 3DS, you’ll have access to something you don’t on the DS Lite — video chat, using the inbuilt camera(s), both locally and over Wi-Fi (note that the above screenshot isn’t related to this info).

The feature, dubbed “Live Caster”, is mentioned in the latest issue of CoroCoro magazine. Once you obtain the ability ingame, it will allow you to video chat with up to four friends you’ve exchanged Friend Codes with locally, and two over Wi-Fi.

In addition, Black & White also feature their own Tag Mode, akin to Dragon Quest IX and the Nintendo 3DS itself. Named “Pass by Mode”, this one uses the C-Gear item mentioned in a previous reveal. CoroCoro says that the Tag Mode will aid your quest in some manner, but doesn’t specify how.

But the tweaks to the game don’t stop there. Additionally, the magazine also mentions that three-on-three battles factor in the placement of your Pokémon (at the front or rear) to calculate the effect of attacks that target multiple opponents.

And finally, Black & White also feature exclusive areas. Depending on which version you buy, you’ll either have access to White Forest or Black City.