Afghanistan's Taliban forces are allegedly training war monkeys to fend off US forces in the said country. I can't guarantee you the authenticity of this claim, I think nobody can. And since no major news network seemed to have covered it, I'll call it fake. What's more is, for your information, this came from China's People's Daily - China's online news website. Yes, it's from China. Surprise surprise.

Here's the actual article and source. Read on: 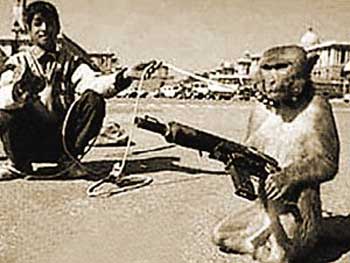 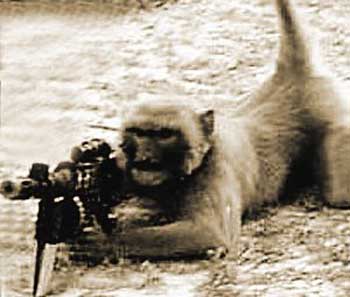 Afghanistan's Taliban warlords have developed a bizarre way to deal with foreign forces: they have trained monkeys who love to eat bananas and peanuts to be killers.

Taliban forces have taught monkeys how to use the Kalashnikov, Bren light machine gun and trench mortars. They also teach them how to identify and attack soldiers wearing U.S. military uniforms.

Ironically, the idea of training monkeys to fight was first invented by the U.S. Central Intelligence Agency. The CIA in the Vietnam War initiated a program that used the peanuts and bananas as prizes to train some "monkey soldiers" to kill Vietnamese in the jungle, according to a report by British media on June 27, 2010.

It is reported that these monkey soldiers are mainly composed of macaques and baboons hunted at an early age in the jungle and sold to the Taliban. These monkey babies who lost their mothers are sent to a secret Taliban training base one-by-one to become killer monkeys. Taliban militants use a series of rewards and punishments to gradually teach them how to use the lethal weapons.

Recently, a British journalist went to Pakistan and Afghanistan border of Waziristan’s tribal region where he witnessed a few of the monkey soldiers armed with an AK-47 rifle and Bren light machine gun. Taliban militants in the past have strictly kept the program secret.

However, Taliban leaders have recently taken the initiative show monkey soldiers to tourists of the Pakistan-Afghanistan border area. Apparently, the Taliban look on monkeys as "propaganda tools."

"If a person who loves animals knows the monkeys may be injured in the war, they might pressure the government to force the withdrawal of western forces in Afghanistan," said one Taliban insider.

If you'll recall, another Chinese news agency faked news by publishing a certain Anri Suzuki - who allegedly had a doctorate degree - wanting to have sex with Chinese students in payment for the past Japanese atrocities in China. In reality though, that Anri Suzuki was just a Japanese AV actress who finished nothing more than high school. She allegedly even denied it in her blog.

Bootleg iPads, bootleg blurays. But bootleg news? Come on China, you can do better than that.