Also known as the Serpentarius, the new zodiac sign Ophiuchus is a rarely used astrological sign. The new zodiac sign resembles a man holding a huge serpent over his shoulders. The Ophiuchus zodiac is known to have been used in the Roman era, and is described in Ptolemy's Almagest from the 2nd century AD. 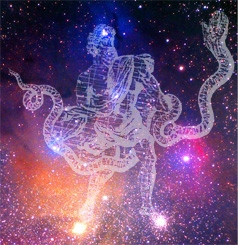 Ophiuchus is a large star constellation located around the celestial equator.

Accoring to astronomer Parke Kunkle, the Earth's changing alignment in the last 3,000 years has prompted new consideration of the sign into standard zodiacs.

In fact, the sign you are born into now are different than what you've been led to believe your entire life.

Kunkle said: "This is not something that happened today. This has gone on for thousands of years," says Kunkle.

"Because of this change of tilt, the Earth is really over here in effect and Sun is in a different constellation than it was 3,000 years ago."

Now instead of the standard 12 zodiac signs, we have a new zodiac of 13. Certainly there are people who's zodiac signs are changed. The new 13 zodiac sign dates, revised of course, would follow the schedule below:

Considering this major change in our zodiac system, I'm now a Leo from previously being a Virgo. My girlfriend, from being a Taurus, is now an Aries. Now, anybody from the readers an Ophiuchus? What do you think? Hit the comments box below.

Add: Did you know that Taylor Swift is now an Ophiuchus from formerly being a Sagittarius?