How to Renew NBI Clearance if Personal Copy is Lost

"How do I renew my NBI clearance if my personal copy is lost?" That's the big question of people who've lost their NBI clearance. Some say you need to go to the NBI's main office in Manila. Some say that presenting a pair of valid IDs is okay. But me, I'll tell my story here.

I lost my NBI clearance a few months ago and I decided to renew yesterday. I got to the NBI Satellite Office here in the Mandaluyong Municipal Hall and I just fell in line like I was going to apply for an NBI clearance for the first time. I got on queue and got my thumbprints recorded on the NBI application form but I checked "No" on the question "Is this your first time to apply for NBI clearance?" since I applied already but lost my personal copy. Of course, I also presented two valid IDs. Never forget to bring two IDs. 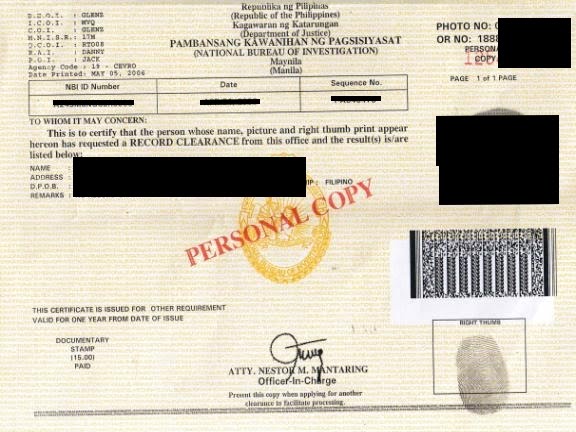 I waited for my name to be called out for questioning but it seems that it got through their records. I was called later and was told to go back Monday next week to get my clearance since my name has a HIT. And I was expecting it, since I also had a HIT on my initial NBI clearance application that lasted for a week too.

So now I'm hoping that when I come back on Monday everything would be fine – no hassles, no questioning, no troubles. I'm hoping that I'll just waltz in and out of the NBI Satellite Office once my name gets called. But if I do get my NBI clearance without the frills, I'll tell you via this post. If it's all good, then you can consider it a technique on renewing an NBI clearance if your personal copy is lost.

UPDATE: Hey guys, I successfully managed to get my renewed NBI clearance today, Mar. 28, 2011, right after a week of waiting because of a name HIT (as mentioned above). So there you have it. If you've lost your personal copy, apply for the NBI clearance like you would for the first time. Just fall in line like the other people applying for their first NBI clearance paper.