A couple of months after its initial release (and quite a lot of patches later), StarCraft 2 remains one of the most compelling games to date. With thousands upon thousands of players worldwide, you can't help but wonder, "are they finishing the game on their own? Or do they seek the assistance of cheats to help them in their quests?" The answer to that I don't know, but given that huge volumes of traffic search up for StarCraft 2 single player campaign cheats, I'm betting on cheaters.

Click on the arcade machine on the Hyperian to play a space shooter mini game.

To make animals explode, just keep double clicking on one at a pretty quick rate. After 10-15 clicks or so, the show will start.

Also, the amount of polish in the game is amazing. Every single unit has a dozen or more unique dialogue when you click on them repeatedly. The best thing to do though, is assign a unit to a group (1 to 0) and just hold the number button down and listen to the chatter.

Left click any creature a few times and it will detonate.

Press ENTER to bring up the console. Enter the following StarCraft 2 cheat codes for the desired effect. 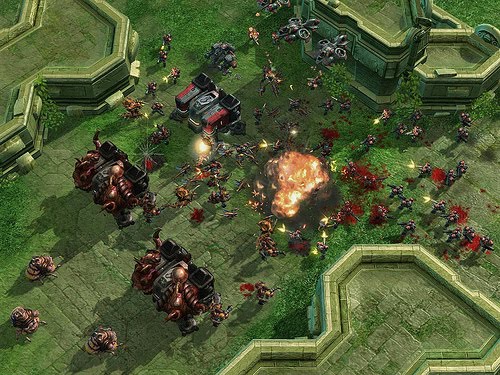 Once you are on the ship's cantina, look in the upper left to see a red female holograph doing the same dance as the female night elf from World Of Warcraft.

During the Protoss missions, watch the TV to see a music advertisement for LVL800ETC featuring a lot of songs. All those songs are from a metal band called LVL80ETC, which is made up of Blizzard employees and is dedicated to all things StarCraft and Warcraft. The lead singer is the head of Blizzard's art department.

Successfully complete the "Ghost Of A Chance" mission and unlock the Ghost rifle. Go to the armory on the Hyperion. [Left Click] the Ghost rifle to examine it. Keep looking at the screen until Nova (from Blizzard's unreleased game StarCraft: Ghost) briefly appears and disappears.

During "The Devil's Playground" mission, go to the bottom right corner of the map on Redstone III. You will find Diablo, from the game of the same name, surrounded by lava. He will attack your units when discovered.

In the "Media Union" mission, destroy the red building that is all by itself on the right edge of the map. There is a pathway to it from the small enemy expansion base that is just north of the player's starting position. It reads as a civilian building when you hover over it, but after it is destroyed, a message will appear stating a secret mission has been unlocked. The mission should be accessible through the Starmap immediately after unlocking it.

More info: On the third mission, there is a tauren marine at the north-west side of the map and he goes in and out of the house and rockets off after it says "secret found" - it is the campaign third mission.


I personally think that all StarCraft 2 (SC2) single player campaign cheats have been discovered already. Why, it's been out for months now, and these cheats are the last we've heard of. Anyway, if you have discovered new StarCraft 2 (SC2) single player campaign cheats, you can share it to us by either sending the cheat thru our contact form above or by leaving a comment in the box below. Of course I'll put your name in this page when your contributed cheat gets posted. Just holla.