There's this notion that as technology progresses, everything related to it becomes smaller. Well, not files. Every day our HDD capacity gets smaller and smaller as more files coming everywhere fill it up. Downloaded games, ripped MP3s, streamed movies, whatever. You want high quality? You need large-sized files. If our PCs fill up with data, we tend to rely on external HDDs. I once saw a dude at a coffee shop sporting a 1TB external HDD. But what would happen if that 1TB fills up with data?

Well, the Chinese have invented a solution: an infinite storage capacity external HDD. The idea is, no matter how much data you put in it, it'll still have room for all the data in the world – because it's infinite storage.

Now, the web chanced upon a Russian computer repair shop, near the Chinese border. A dude, presumably of Chinese origin, brought this bootleg Samsung HDD – infinite storage capacity of course – because it was not working as advertised. The dude thought it was broken. 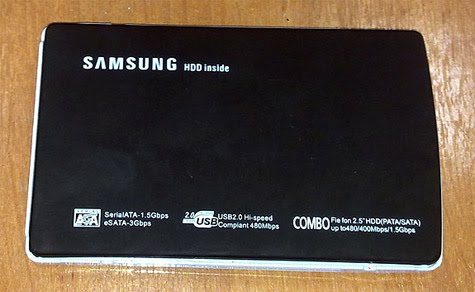 According to the owner, he was transferring a 1.5GB movie onto this hard drive. When he clicks into the file it shows the whole 1.5GB but when he plays it, somehow only the few seconds of the movie gets played. So the Russian repair shop decided to open the HDD up to see what's going on. But upon closer inspection, they found this: 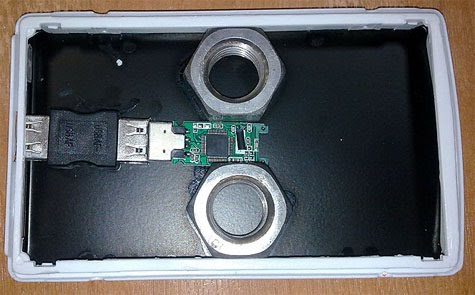 First of all, that is not: 1) A metal penis facing left and; 2) An alien face on a 90 degree angle. What you're seeing are two huge metal nuts and a 128MB flash drive sandwiched in between. The two metal nuts are  there for the "authentic" weight factor. Because let's face it, once you hold an external HDD weighing like a 128MB flash drive you'll instantly get suspicious.

Now, when you copy a huge file and paste it in, the driver cleverly sucks data in from the host computer until it’s full and then starts dumping data until all it’s left with is the last part of the file. All other files on the drive stay intact and the file size of the now incomplete file is reported correctly.

This I should say, is pure genius. Who would've thought that the Chinese would invent the first ever infinite storage? I mean, they make bootlegs of everything starting from the humble toothpick to Rolex watches to your momma. The Chinese would be very proud.

Anyway, next time you're in Hongkong or in Macau, or in CHINA, be wary of what you're buying. That $200 USD iPad 2 of yours might be just a whiteboard sandwiched with plastic parts. You've been warned.