So again, just follow what I mentioned below and you should be safe and guaranteed to be virtually brick-free.

I just updated my custom firmware a few hours ago from Liquidzigong's 5.50 Prometheus-4 to Coldbird's 6.20 PRO-B4 Permanent. Now believe me what I did ain't pretty. It took too long and irritated the hell out of me. Fortunately I didn't brick.

Seeing that there are people out there like me who have no idea what to do to upgrade to 6.20 PRO-B4, I'll make a simple guide here. I found it out the hard way so you won't have to.

Disclaimer: This is what I exactly did. Now, if your PSP gets bricked, it's not my fault because it worked for me. Don't worry, there's a high chance you'll succeed too. Just make that Hellcat's Recovery Flasher 1.65 handy.

Now, I won't be putting on any links since you can already find them in the internet. One good source of CFWs and homebrews is pspslimhacks.com. You can find everything you need there. Again, this is what I did with my 5.50 Prometheus-4. It's likely to work too with 5.00 m33-6 and 5.50 GEN-D3. Let's begin.

2. Plug your PSP in your computer. Go to x/PSP/GAME and create a folder. Name it "UPDATE", all caps. Paste the 620.PBP inside that folder;

3. Unplug your PSP. Go to the games section, there you would find the 6.20 Sony OFW update. Run it directly. It will get rid of the 5.50 Prometheus-4 for you. After it installs, you should now be in the 6.20 original firmware. Note that some the games in your XMB would disappear. That's fine because when you go back to CFW it'll appear again.

*NOTE: If the 6.20 updater says "Firmware is already 9.90. There's no need to upgrade." You could disable version.txt in the recovery menu of your CFW.

The long way to do the above is: 1) Hold SELECT, the VSH menu will appear; 2) Look for USB Device, change it from Memory Stick to Flash 0; 3) Plug your PSP in your computer, open it, scour all the folders and look for a notepad file called version.txt. Find the "9.90" line inside it and change it to "5.50" then save; 4) Unplug your PSP, hold SELECT again then return the USB Device from Flash 0 to Memory Stick.

4. Plug your PSP again to your computer. Go to x/seplugins. Look for the notepad files called "game", "vsh", and "pops". You should see something like this in all three notepad files:

Make all those 1's to 0's. The reasoning for this is some plug-ins are incompatible in the installation of the 6.20 PRO-B4. You can turn some of these on again anyway. Note that I said "some" only because chances are high that there would be really incompatible plug-ins.

5. I do hope that you have already downloaded a 6.20 PRO-B4 updater by now. If you haven't yet, go to pspslimhacks.com and find the 6.20 PRO-B4 post and download from there.

Now, extract the RAR file. You'll end up with three folders. Paste all these folders in x/PSP/GAME. Unplug your PSP and run the PRO UPDATE eboot. In the PRO UPDATE screen, just press X and X and you're done. Congratulations! You're now a PSP master on 6.20 PRO-B4! Remember that you're in a HEN-like state at this time. When you shut down your PSP completely you'll revert back to 6.20 OFW, not that it's bad. It's just going to eat your time.

6. Run the PRO PERMANENT BOOTLOADER next. What it does is it nails your 6.20 PRO-B4 in place so even if you run out of battery accidentally or if you shut it down completely you'll still be in 6.20 PRO-B4. It's totally uninstallable though, should you wish to.

You should ideally press X and X. Y'know, just to avoid bricks. But if you feel like you're safe and you'll be just wasting your time, just press X and O. That's what I did anyway. Just X'd and O'd instantly.

It's going to say something about keeping a vshorig.prx and a vshmain.prx. Read carefully what it says. Remember it for the entirety of your 6.20 PRO-B4 run.

7. After the program exits, your PSP is now bricked on 6.20 PRO-B4 Permanent! Congratulations! 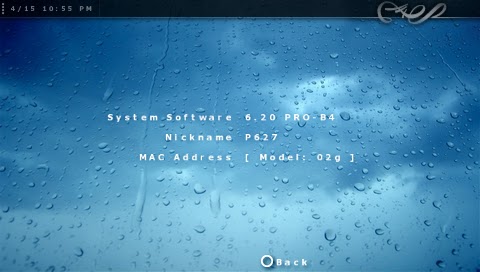 Thanks to Coldbird and Team Genesis for this CFW.

Upgrading to 6.20 PRO-B4 is one thing, but making your PSP waterproof is another.