Are you a fan of the fastest rising football team in Asia—the Philippine Team Azkals? Well, here's your chance to watch them live at our very own Rizal Memorial Stadium this coming July 03, 2011 courtesy of the Team Azkals' official pain reliever Cortal SQR.

Read the section below on how to watch the Team Azkals live at the Rizal Memorial Stadium this July 03, 2011: 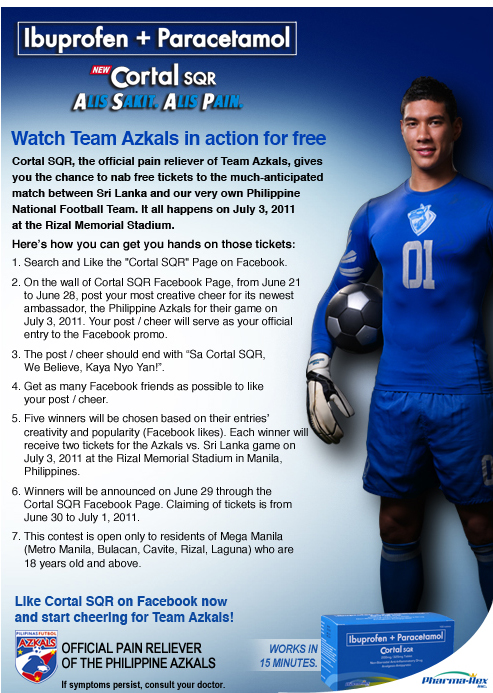 The new Cortal SQR, the official pain reliever of Team Azkals, gives you the chance to win tickets to the much anticipated match between Sri Lanka and our very own Philippine National Football Team. It all happens on July 03, 2011 at the Rizal Memorial Stadium in Manila, Philippines.

Here's how you can win those tickets:

1. Search and Like the "Cortal SQR" Page on Facebook.
2. On the wall of Cortal SQR Facebook Page, from June 21 to June 28, post your most creative cheer for its newest ambassador, the Philippine Azkals for their game on July 3, 2011. Your post / cheer will serve as your official entry to the Facebook promo.
3. The post / cheer should end with “Sa Cortal SQR, We Believe, Kaya Nyo Yan!”.
4. Get as many Facebook friends as possible to like your post / cheer.
5. Five winners will be chosen based on their entries’ creativity and popularity (Facebook likes). Each winner will receive two tickets for the Azkals vs. Sri Lanka game on July 3, 2011 at the Rizal Memorial Stadium in Manila, Philippines.
6. Winners will be announced on June 29 through the Cortal SQR Facebook Page. Claiming of tickets is from June 30 to July 1, 2011.
7. This contest is open only to residents of Mega Manila (Metro Manila, Bulacan, Cavite, Rizal, Laguna) who are 18 years old and above.


So what are you waiting for Team Azkals fans? Head to Cortal SQR's Facebook fan page and post your most creative cheer now!