This Tuko Gecko Scam has just recently been aired at a local TV station's news program. I knew about this tuko gecko scam for quite some time now. Actually it has been on the internet for more than two months, and it was known previously as the Tokay Gecko scam, the tuko's English name.

Now, the myth behind this scam is that inside a tuko or gecko's innards lies a powerful enzyme that when consumed will cure the incurable HIV/AIDS and magically poof away the dreaded cancer. But is there any truth to the myth? Obviously no. If there was, don't you think scientific communities all around the world—such as America, Japan, and the EU—would have verified it by now? It's the audacity of the claim that astounds me.

Another thing beyond belief are the prices being offered for these lizards on the internet. In the past months, these tuko or geckos have been only fetching five-digit amounts e.g. P10,000.00, P55,000.00, etc. Now, it's being sought for ten to twenty to sixty to a hundred to a billion pesos. Just look at the screengrab below, courtesy of buy & sell website sulit.com.ph (Click to enlarge): 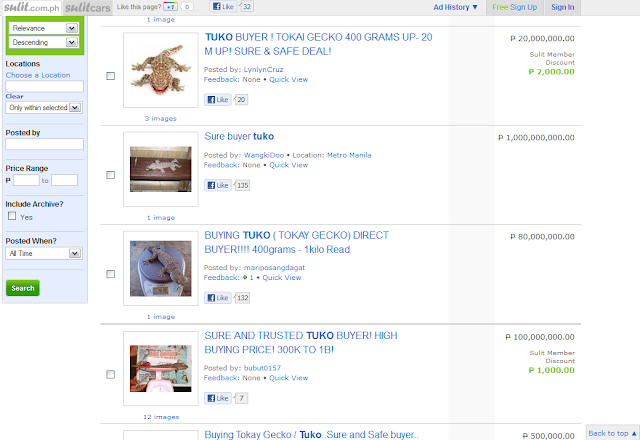 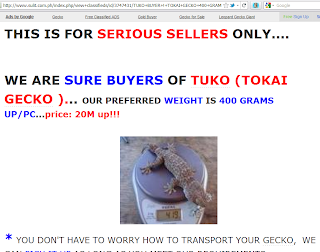 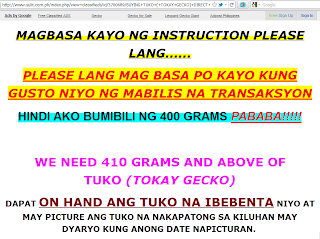 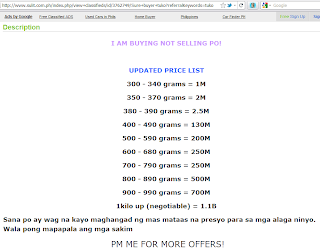 These images are in no way edited or manipulated. These are for real. And with those audacious prices, don't you think something is so wrong here? I'll prove to you why it's a scam.

First of all, these are tens of millions of pesos we're talking about. These amounts when aggregated are more than enough to build more or less twenty Jollibee franchises. Imagine that. Don't you think that P1 billion is too expensive for a single lizard?

Let's have things in perspective here: P100,000,000.00 is equivalent to $2.3++ million while P1,000,000,000.00 is roughly $23.8++ million. Meanwhile, Manny Pacquiao makes about $15 million per fight. The guys buying these tuko or gecko for medicinal purposes must be richer than Manny Pacquiao, Lucio Tan, and Henry Sy put together! And gee would you look at that, they are no-namers or have totally fictitious names. If they had that plenty of money, they'd probably be better off flying to the US investing in huge corporations. But no, they decide to stick to buying lizards for millions of pesos. Actual comment of a tuko buyer below:

Second, don't you think that it's more economic for these "tuko gecko scam" people just to hire lizard hunters for their very opulent enterprise? Let's face it: If I had a business as huge as this, I won't buy tuko from other people for P20 million or even P100 million. I would just hire employees that would catch geckos for me, and in the process I'll pay them premium wage, say P50,000.00 a month or P10,000.00 per lizard. The people running this scam are totally preposterous and are complete numbskulls.

Third, if I had billions of pesos to spare, don't you think that I'd have better grammar and writing skills? Look at this one, who writes in high and mighty colors. The poor guy even scares would-be tuko sellers that the last date of selling their geckos is up to July 13, 2011 only because the Philippine Government would take over the trade, which coincidentally starts today. This moron even deleted all comments on his comments box, apparently "for privacy purposes." I smell something fishy.

Fourth, this fad is akin to the sale of dried seahorses to dried tigers paws for medicinal purposes in China. Thing is, those are way cheaper than these tuko or geckos. These lizards have 0% medicinal value and could probably just worsen your health.

Victim: I don't currently have one, but I'll look for it. I want to have P25 million.

Victim: What is it's weight?

Scammer 2: About 600 grams. I just really need the money for the birth of my son. Otherwise I won't sell my beloved pet.

Victim: Sure I'll buy that immediately! Let's meet up!

Victim: I've been calling the dude who wants to buy this gecko for P25 million for two hours straight now. He doesn't answer his phone.

*After a whole day of trying to contact Scammer 1, Victim realizes that he has been conned. Victim now has possession of a worthless lizard that can be found in the jungles of the Philippines.*

Be very wary of these scammers. They will tell you all the reasons in the world just to sell you a worthless lizard. I even heard of one trying to sell gecko that would be immediately sent to Japan to cure the people who have been exposed to the radiation of the Fukushima Nuclear Plant.

To read more about the tuko gecko scam, go to the links below:


There are a billion reasons more why this tuko gecko scam is just that—a scam. Unfortunately, most of the Filipino populace are still completely ignorant on how scammers work. The common Filipino folk now genuinely think that the NBI, the DENR, and the PNP are involved in this illegal activity, that these government agencies would try to undercut them in selling these lizards for hundreds of millions of cash, which is totally bull by the way.

Nonetheless, consider this as your tuko gecko scam red flag. You have been warned.

P.S. If you're someone who would try to defend these scammers by saying that I'm lying and they're really buying tokay geckos for 8-digit amounts, show your proof. You're probably in cahoots with scammers anyway.