As social networks grow in size, so does their presence in the internet. As you can see here in this web page, I have quite a number of social media buttons installed: I have the Facebook Like button, the Twitter Tweet button, and the Google +1 button. To my defense, I've installed these buttons for people to be able to share the content they like in my site.

Now, did you know that these buttons, even without you clicking on them, are transmitting your activity already? What they'll do is transmit your browsing habits to companies that are willing to buy them for a sum of money or something similar. I found here a tool that would prevent Facebook and Twitter from tracking you ergo you won't leave any data-trail in any site until you actually click on a social media button i.e. the Like, Tweet, and/or +1 button. It's called ShareMeNot.

But what is ShareMeNot? As its home page says:

ShareMeNot is a Firefox add-on designed to prevent third-party buttons (such as the Facebook “Like” button or the Twitter “tweet” button) embedded by sites across the Internet from tracking you until you actually click on them. Unlike traditional solutions, ShareMeNot does this without completely removing the buttons from the web experience.

3. A few confirmation boxes will appear. Just click OK on all of them to install ShareMeNot; 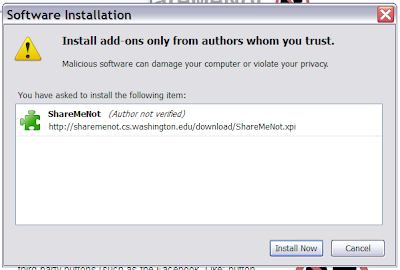 *ShareMeNot is currently available for Mozilla Firefox only


You should definitely try out this plug-in especially if you're a privacy nerd. Even then, at least you now know how to prevent Facebook, Twitter and a plethora of other social networking sites as well (like Digg) from tracking you.

Thanks to the guys over at the University of Washington Computer Science Department for developing such a useful plug-in.