The PC industry today has never looked bleaker. The world’s largest PC-maker Hewlett-Packard just announced their intention to explore the separation of its PC business. With PC manufacturers increasingly abandoning design and technology in lieu of outsourcing and cost-cutting, the PC industry has seen a severe dearth of innovation in recent years. Gaming consoles have also taken advantage of this innovation slump in the PC industry to garner attention from game developers and gamers alike, to the extent that now PC versions of cross-platform games are often sub-par ports of their console counterparts. 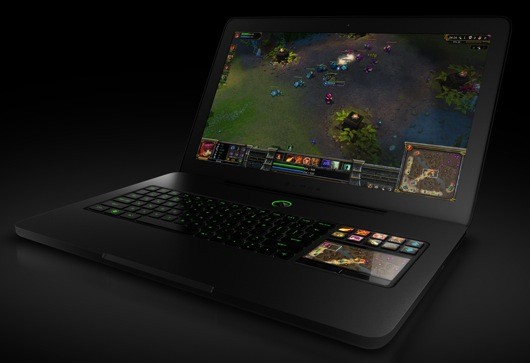 Razer, the world leader in high performance gaming hardware, introduces the Razer Blade – a full aluminum chassis gaming laptop featuring true portability, incredible performance, and an all-new revolutionary user interface. With the introduction of the Razer Blade – a feat of modern-day systems engineering and technology, Razer is reinvigorating technological and design innovation for the entire PC industry, and encouraging gamers and developers to return to the PC as the primary gaming platform of choice.

Mobile systems developed for gaming today compromise on portability and form factor for game performance. While such machines run games well, they are over 2 inches thick and can weigh more than 10lbs. The Razer Blade measures 0.88 inches thin, less than half that of current mobile gaming systems, and weighs only 6.97lbs, achieving a balance between portability and performance – making it the world’s first true gaming laptop.

Developed in partnership with Intel, the Razer Blade features a fast Intel® Core™ i7 processor and a high performance NVIDIA GeForce® graphics processor. The hardware was designed to run the most demanding games of today without sacrificing the laptop’s portable form factor. The Razer Blade also does not compromise on screen size as it comes with an incredible LED-backlit high-definition 17” display.
The Razer Blade features the Switchblade User Interface - Razer’s multi-award winning, highly intuitive interface technology. The interface is comprised of 10 dynamic adaptive tactile keys for easier access of in-game commands, and an LCD capable of two modes: one mode that displays in-game information when a mouse is in use; and another mode that functions as an ultra-sensitive, multi-touch panel designed for gaming on the go.

“The Razer Blade was designed to give gamers a laptop they could truly use on the go,” said Min-Liang Tan, CEO and Creative Director, Razer. “Its sleek, lightweight aluminum construction makes it the thinnest 17-inch gaming laptop available today.”

“The Switchblade User Interface on the Razer Blade is a revolutionary innovation that truly defines the new standard for gaming experiences on a laptop,” said Min-Liang Tan.

Watch the “Introducing the new Razer Blade” video at www.razerzone.com/blade.


About the Razer Blade Gaming Laptop

The Razer Blade is a 17” gaming laptop that delivers incredible performance and a revolutionary user interface in a sleek, portable form factor. It features a fast Intel® Core™ i7 processor and a high performance NVIDIA GeForce® graphics processor designed in a lightweight aluminum chassis. The revolutionary Switchblade User Interface, found next to a full-size keyboard, was designed from the ground up to enhance gaming experiences and provide more control at the gamer’s fingertips. It features 10 adaptive tactile keys and a multi-touch LCD panel that can also display in-game information. And at just 0.88 inches thin and only weighing 6.97lbs, the Razer Blade is the world’s first true gaming laptop. 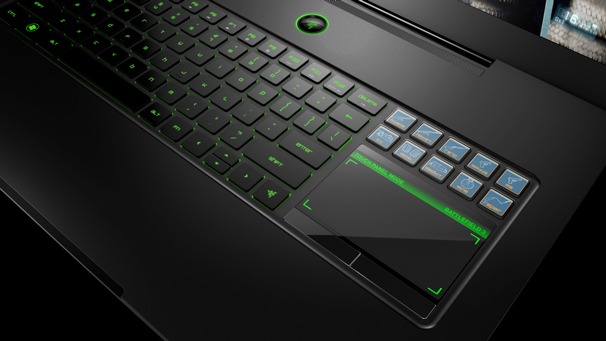