Last Friday at exactly 11.11.11, Cherry Mobile invited the members of the media to their Cherry Invasion event where they launched and showcased a new and powerful lineup of affordable Android-based smartphones and tablets.

First up is Cherry Mobile's tablet trio: The Cherry Pad, the Cherry Pad Turbo, and the Supreme.

The Cherry Pad and the Cherry Pad Turbo will run on Android Froyo and Gingerbread respectively. The Supreme on the other hand, will be boxed with Froyo, but is upgradeable to Gingerbread. It is also equipped with a Nvidia Tegra 2 Dual Core processor that will assure speed and power. Each tablet has its own strength, but is guaranteed to be on the cheap in comparison to higher-end brand models in the market. 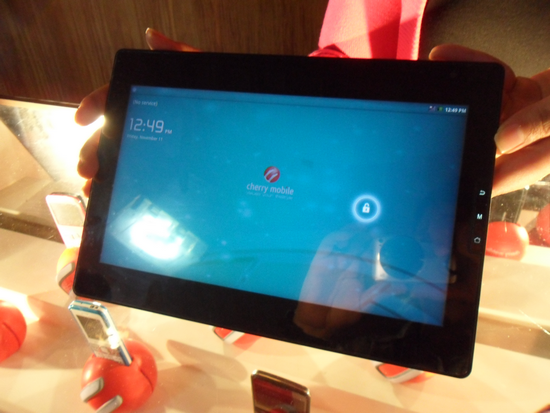 Next up are Cherry Mobile's up to date yet economical smartphones: The Candy, the Stellar, and the Magnum 2X.

If anything above four grand is out of your league and you're still looking for a smartphone, the Cherry Mobile Candy and Candy Chat is for you. These smartphones run on Android 2.2. Froyo and are microSD expandable to up to 16GB. Best part is, these phones are both priced at P3,699.00.

As the successor of the Eclipse, the Cherry Mobile Stellar is guaranteed to be on a hot roll. It comes with Android 2.3 Gingerbread, a capacitive touch screen, WiFi, and a 5MP camera. At P7,899.00, it's one of the best priced smartphones out there capabilities-wise.

Lastly is Cherry Mobile's new flagship model, the Cherry Mobile Magnum 2X. Dubbed as the "best priced dual core smartphone"—which in my opinion is a fact—the Magnum 2X is the upgrade of the previous Magnum HD. It has all the increments of a standard Android phone (runs on Froyo, upgradeable to Gingerbread), except that it sports a Nvidia Tegra 2 Cortex A9 Dual Core 1GHz processor, which of course, is where the next generation of smartphones is going to. It's not the latest out there in terms of processing power, but it's definitely among one of the most capable. This here is one smartphone that won't lag.

Anyway, Cherry Mobile will also be holding a discount promo for their phones this yuletide season. Check their stalls out and you might get freebies for every purchase. You should definitely be checking Cherry Mobile out if you want to gift someone with a smartphone or a tablet.

So, that's it for this post. Check the gallery below for the specs sheet of all the items mentioned above. Just click on the images to enlarge.