Passed by at the 6th Christmas Toy Fair and 1st Phil. Diecast and Custom Car Show at SM Megamall yesterday. The entrance fee's fifty bucks, but it was totally worth it. Had so much fun and was able to see some awesome people and lots of eye candies.

There were plenty of people around the area, more than what the pic below shows. I dunno what's with toy conventions and whatnot though, but each and every time there are toy events like this cosplayers flock by the truckload. Worst part is they clog the outside of the event area. Combine that with mall shoppers and you have a clusterfuck waiting to happen. 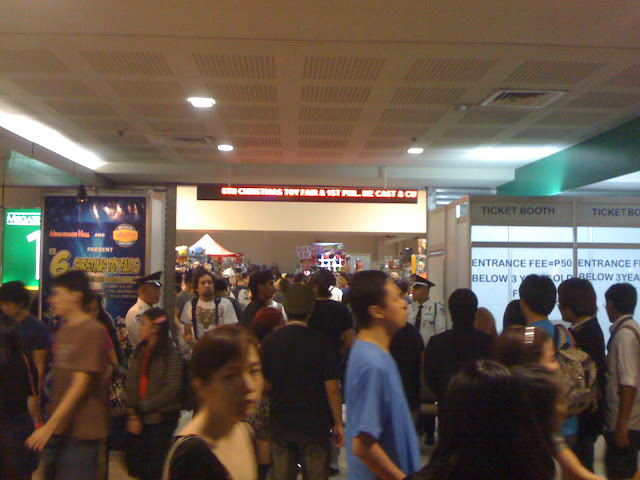 I don't know what's a cosplayer's ultimate goal is in attending these non-cosplay events. Is it to attract attention or show their outfits off? Is it to get their pictures taken, to get ogled at by men? I guess I'll never know.

Anyway, one of the best things that happened at the 6th Christmas Toy Fair was the toy auction that was led by none other than Azrael Coladilla himself. They were auctioning toys off for as low as P300 for a genuine NBA Tracy McGrady standee. The best part: The proceeds of all the sales are going directly to charity. Now that's cool. 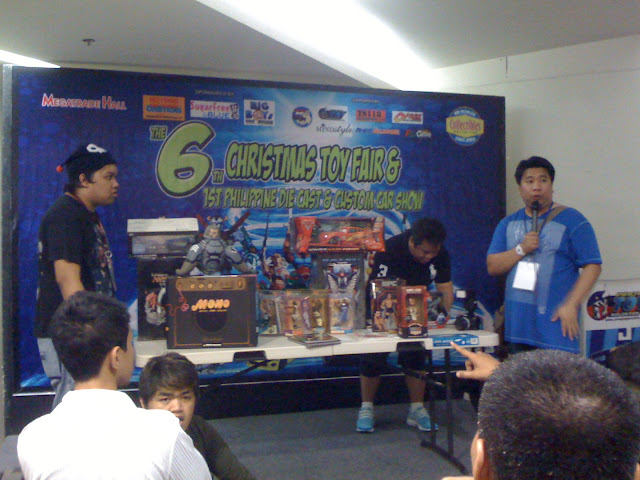 I wanted to participate badly in the auction, too bad nothing there fancied my interest. If there was only, say, a holographic Pokemon card back there for a Ninoy, I'd buy it instantly.

There were also mountains upon mountains of toys ranging from the United States to Japan available at the event. Surprisingly, they were selling for way way low their usual store prices. Pokemon gashapon boxes straight from Japan were selling for fifty flat. That'd be twice the price if you were to buy one at Toy Kingdom. Gundam model kits were selling for like half the price too, and these are not those P547 boxes you can find at toy stores. They were selling bigbox Gundam kits. Only thing I wasn't able to find there were LEGOs and Spongebob Squarepants (yes they were selling Ben 10's and Marvel and DC stuff too). 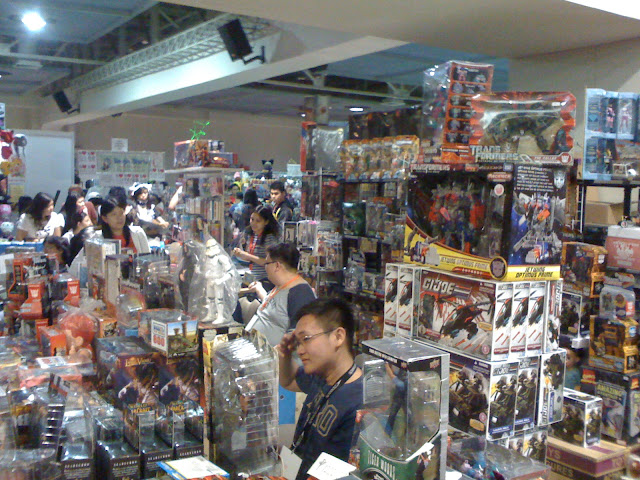 Also present at the toy fair were used PS3 games at the cheap, tons of anime paraphernalia, boxes of US comics and Japanese manga, and die cast toys and collectibles from the 1st Phil. Diecast and Custom Car Show's area.

Speaking of the 1st Phil. Diecast and Custom Car Show, there weren't a lot of folks in their area, maybe because there's only that much people interested in scale models of cars and airplanes (used to have tons of Matchbox cars when I was younger). I just hope those diecast guys would continue on with their annual event even if there's not much people turnout this year. It's their first event after all. They should show up again next year. Here's their area: 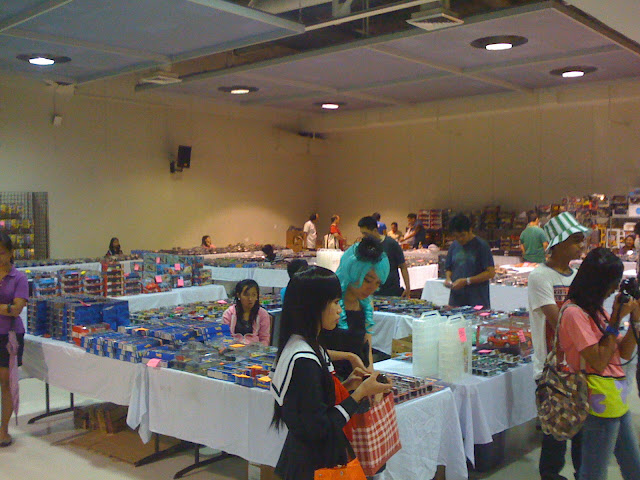 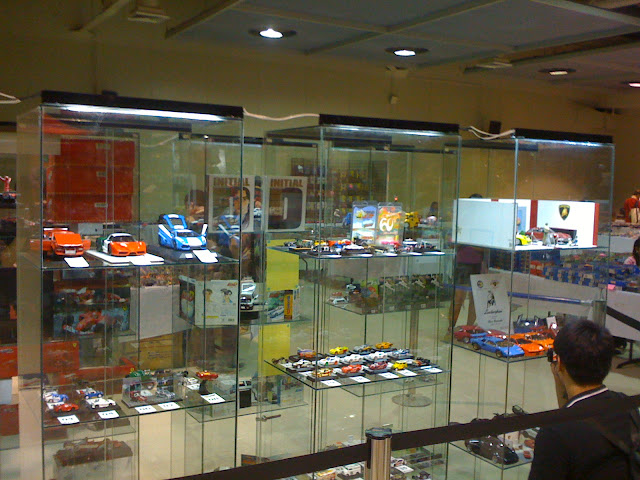 Sadly though, events like this always come unknown. I mean, there's lots of posters on the internet about these events but the general public doesn't know where to look for them. Yahoo PH! should give a free spot on their homepage dedicated to toy and cosplay events such as this. If only it was widely advertised the turnout possibly could've been doubled.

And for the last part, I'll show you some of my picks in the photos I took.

First three photos here are the guys from the Justice League of America. First photo I took they were at the toy fair mentioned above, happily posing for picture takers who want to experience the JLA firsthand. 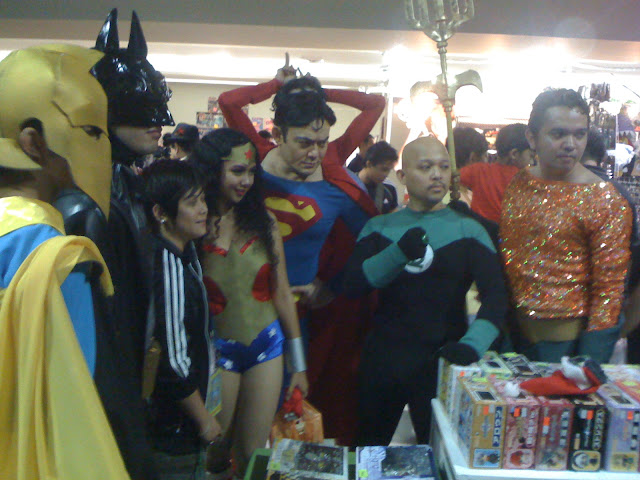 The following pictures meanwhile were taken at a comic book store, which is of course very appropriate considering they were comic book superheroes themselves. Funnily, they just barged in and started pointing at the comics. I stood at the entrance, took some shots, and when I was done taking pictures there were, in all honesty, a clusterfuck of people standing behind me also taking photos. I think I elbowed a woman's face accidentally while trying to get out. FYI, I didn't follow them to the comic joint. They just popped up there suddenly. 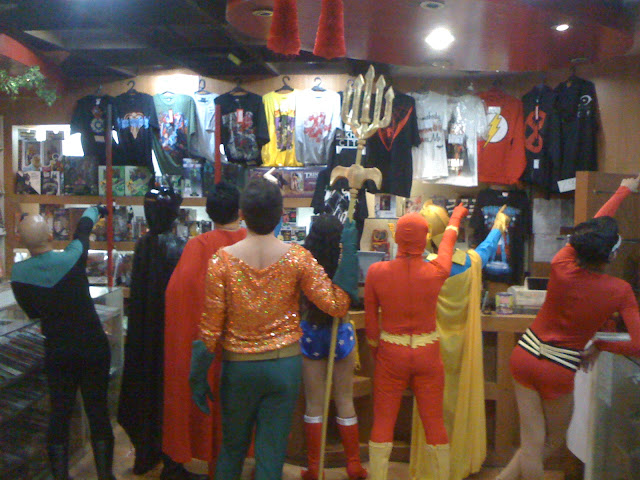 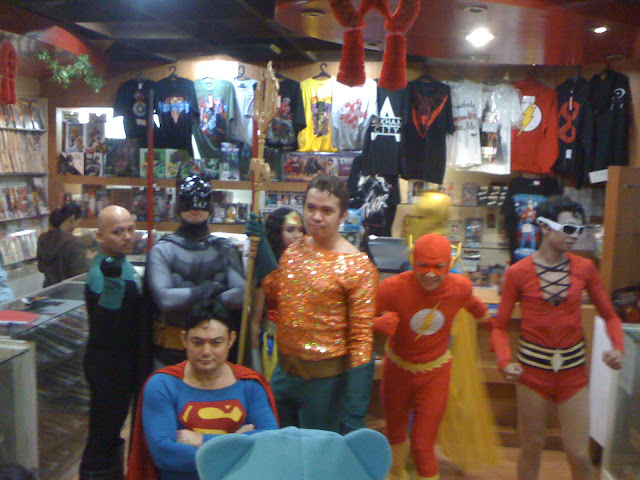 Frankly though, I think Superman had his face done. That or he really looks like Clark Kent. Plus Aquaman's shiny blonde hair and Green Lantern's mask are missing. I applaud these guys for going all out though. It's fantastic to see a bunch of friends playing as a whole group rather than just the normal cutesy teens imitating Japanese anime characters. 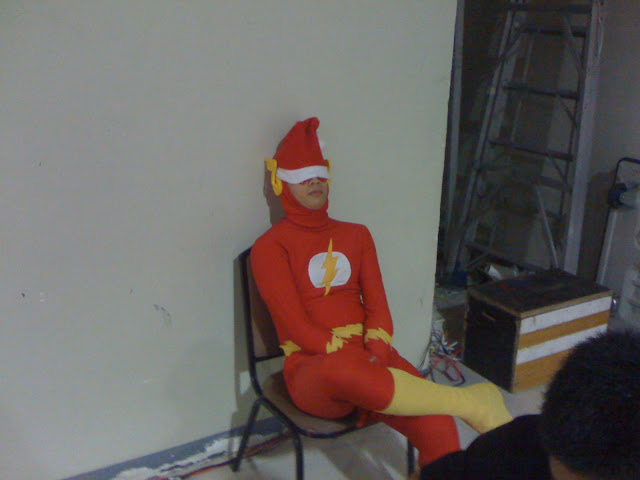 Then again, superheroes are only human. They need to sleep too. That's why you can't find the Flash in the first JLA photo above.

I was mildly surprised to find out that 2RATS, the store that I believe started the anime fever a decade and a half back, was still up and running. Ever since Comic Alley went on a viral rampage, 2RATS shrunk to obscurity. Their Multiply Store says otherwise though. Apparently they have stores around the Metro. 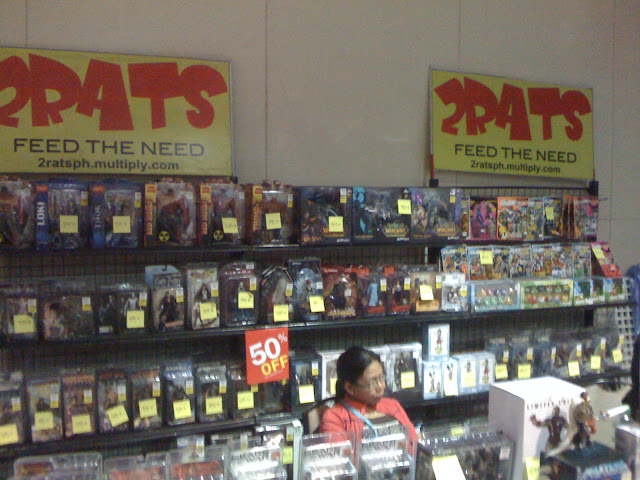 Would've bought this if it wasn't kiddie sized and placed right-side up. Same belt sells for $15.99 brand new at Amazon. 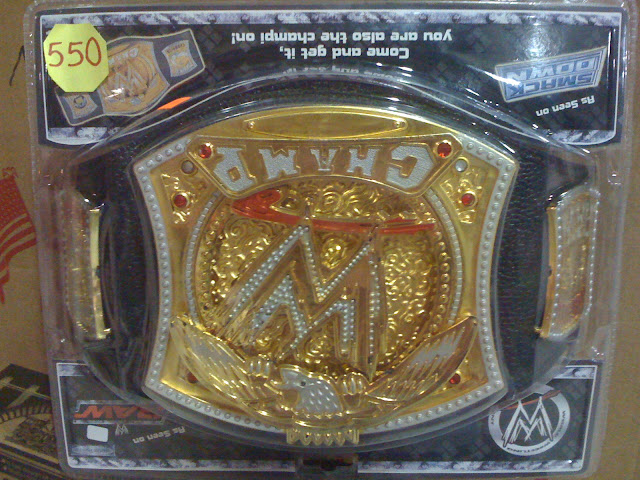 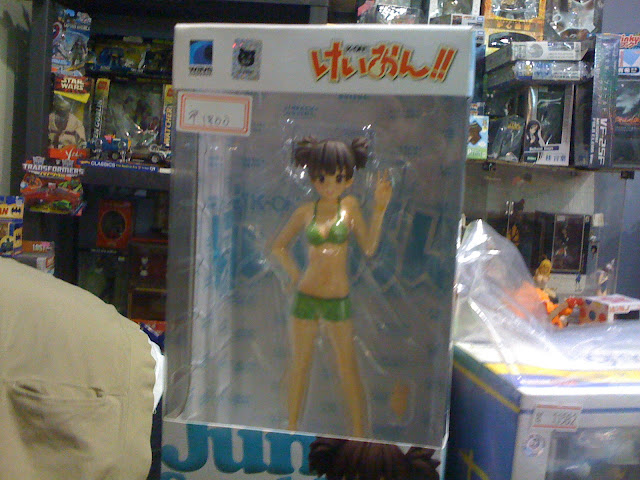 And as a wrap-up for this post, here's the dude with the best costume in the whole mall at that time: A Predator. I mean, look at his outfit, it's awesome. The painstaking detail he put into this meticulously assembled piece is unbelievable. Trust me, I saw DragonCon 2010 and 2011 and in my opinion the only costumes that would beat this outfit out are those from Halo or Iron Man. 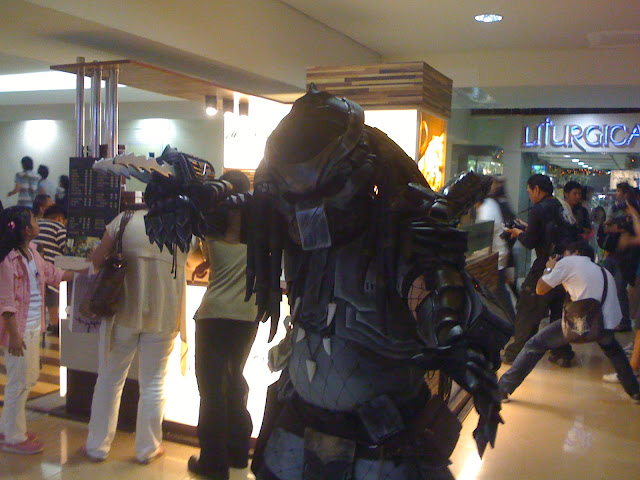 Locally though, I think this guy would be hard to beat. I've been accidentally at cosplay competitions here and there, saw lots of great costumes, but those that were were only made of stitched fabric in a detailed manner.

This right here is the epitome of Philippine cosplay evolution. Forget about Alodia, this Predator outfit is of international level. This makes me believe there's a bright future for Philippine cosplayers, not only Bleach or Naruto.