A recent count by statistics company StatCounter in the worldwide browser market showed that Google Chrome is now the second most popular browser in the world.

While all the official stats and percentages are out there lying in the internet ocean, I peeked at my own stats and this is what it spat out, courtesy by Google of course: 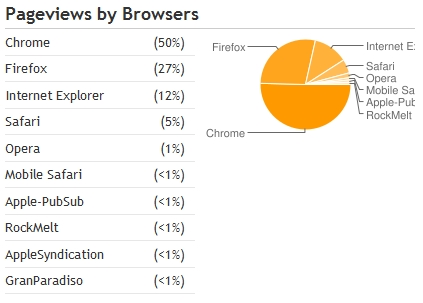 While the stats above are inconclusive, it more than confirms that Google Chrome is now the preferred browser of people, specifically gamers and social networkers.

It's also worth noting that although the Statcounter data says that Internet Explorer is still the number one browser in the world, my stats puts Microsoft's browser at 12%. This could be due to the this era's youth's expansive knowledge on technology and/or general gamer/social networker online behavior (e.g. "Hey bro I heard Chrome is great! Let's transfer to it!").

This makes me sad quite a bit because I'm a Firefox fanboy. Always was, always will. Everyone in my family is using Google Chrome except me. Don't expect me to use Google Chrome anytime soon though.

Anyway, why are some people still using Firefox 3 (Gran Paradiso)?

Meanwhile in the OS front, Windows is still king (how is this news?). Even though we hear a lot of people—I mean sheeple—saying that the Mac is this and that, it still eats dust when compared to Bill Gates' operating system. Oh, that's why Steve Jobs hates it so much. 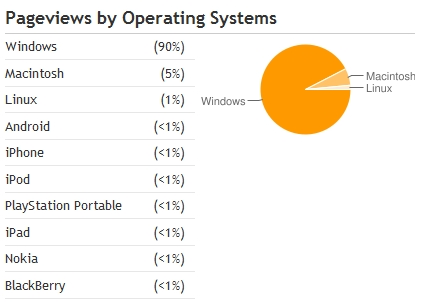 If only the Mac can run Skyrim. Oh wait, it can—with ports and a Windows bootcamp partition. Windows on a Mac. How ironic. I'm not bashing the Mac though. It's one great machine to bring to coffee shops and wow people. No, seriously. If the Mac can just run some serious games without ports and all it would receive lots of love.

Speaking of love, sadly I'm not receiving any love from mobile surfers, so it's a gray area at that.

So that's it for this post. Now, can somebody tell me why the heck Ubuntu isn't on the list?