Justin Barbey and people from XDA Developers recently released a new and improved HTC Super Tool, v2 if you will. But wait, what exactly is the HTC Super Tool v2?

The HTC Super Tool v2 is an all-in-one Windows-based utility which, in one button press, roots, unroots, does a bootloader unlock, performs an S-OFF, disables or enables the HTC Sense UI, unlocks networks, and applies the wireless tether exploit. All this and more in one tight and packed program. 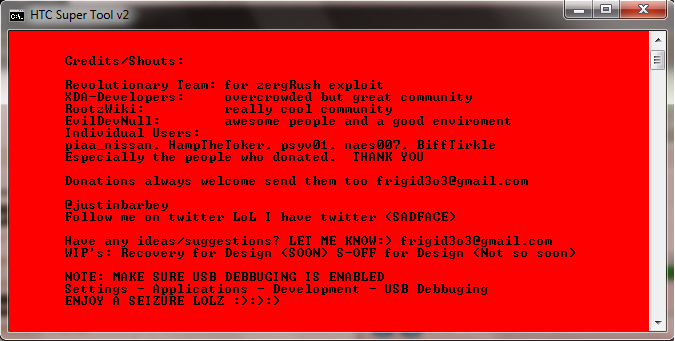 Note: If you're a DIY person, always make it a point to back everything the hell up. Otherwise leave it to an experienced person or a professional.

Note 2: Other DIY'ers are reporting that some of the options featured in this HTC Super Tool v2 aren't working.

How to Use HTC Super Tool

Instructions:
1. Download and install the HTC Driver pack;
2. Download and extract the HTC Super Tool .rar file;
3. Enable USB Debugging on your HTC device by going to Settings, then Applications, then Development;
4. After making sure that your HTC device is connected, run the run.bat file you've extracted; 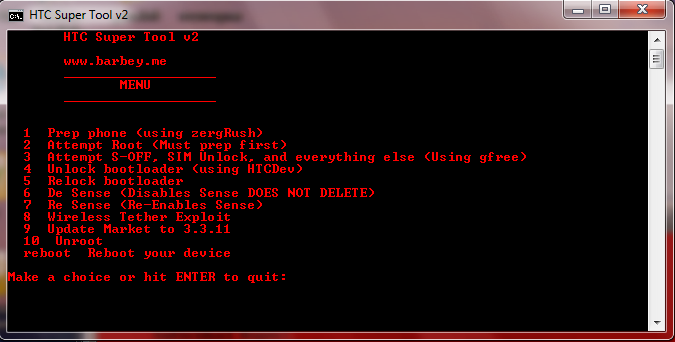 5. An option screen will come up and will prompt you for the desired action. Select an action by pressing the corresponding number;
6. Wait for the program to run its course and enjoy.


Again, make sure you have a backup of what you're doing just in case a snafu comes up.

Now that you know what the HTC Super Tool does—that is, unlock the bootloader and root or unroot—and how to use it, go ahead and try it, do it yourself. Gain some skills. Then again, you can just Facebook or Twitter this post and leave the unlocking to the pros.

Thanks and credits to Justin Barbey at barbey.me and the XDA people for this release.