First person shooters (FPS) are one of the hottest game genres around, especially with the release of titles such as Battlefield 3 and CoD: Modern Warfare 3 (which is better is arguable). If you are a heavy player of FPSs on the PC, all that banging and raging on your keyboard would eventually take a toll. Sooner or later you'll replace that thing with another run-off-the-mill generic type if you're not careful. Not if you're rolling with Cooler Master's Storm Quickfire Rapid you won't. 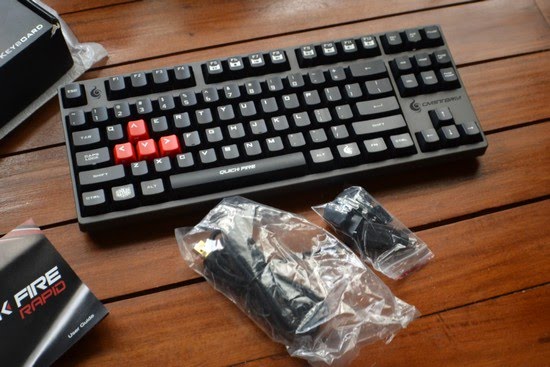 The CM Storm Quickfire Rapid is one heavy gaming keyboard. I've held lots of keyboards and the weight of this Cooler Master release is pretty noticeable. I've knocked on the board itself, and although it may seem silly doing so, I can tell it's pretty solid. It weighs 2 lbs and is as steady as a rock on a flat surface, so imagine how stable it would be when you play a fast-paced game. No more moving keyboards.

The keyboard itself is painted matte black and dark gray—which looks awesome by the way— with the WASD keys highlighted in bright red so you can always exact your fingers at the right keys at every critical moment. The font on the keyboard itself pretty much rings of Modern Warfare 3 giving it that very gamey look. Also to note is the rubber-coated keyboard surface: Anti-slip is always the way to go.

Aside from gaming, the keyboard has all the basic functions of an ordinary keyboard (sans the numpad. Really, who needs the numpad in highly intense games? More on this below) plus some added features such as being able to mute your PC with just two keys.

The CM Storm Quickfire Rapid features gold plated mechanical switches on its insides. Like I mentioned in my previous CM review, companies and gamers alike tend to believe that data is delivered faster in gold plated parts. The USB plugs itself are also gold plated, so there's that. 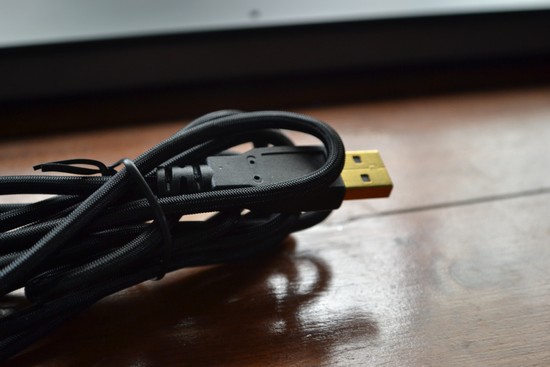 You can pretty much tug on this keyboard's cord if you ever decide to rage seeing the cable itself is braided. Frankly I only see braids on mid to high-tier HDMI cables and not much else. That or I don't look around very often.

Lastly is the Quickfire Rapid's compact size. Whereas ordinary keyboards extend to a couple inches or so to the right, the CM Storm Quickfire Rapid completely eliminates the numpad key set, giving the player an optimum keyboard-to-mouse reach. You need not bend your wrist and extend your arm by a couple of extra inches just to reach the mouse. Sadly, no macro keys here.

Unless you're playing newer shooter games, you'll experience no significant change in keyboard performance data delivery-wise even though the Quickfire Rapid features a 1000Hz/1ms response time in USB mode. It's just too fast for a person to measure in terms of performance. The strong suit of the Quickfire Rapid is its gaming-oriented design. Essentially you'll perform better because the keyboard you're using will not be an office keyboard but a "purely for gaming" one.

Also, if you've experienced a freezing avatar while pressing three or more keys, chances are you've just suffered from ghosting. The Quickfire Rapid sports an anti-ghosting feature which allows you to press multiple keys at the same time at a given situation. I've not tested the maximum number of keys the anti-ghosting feature can handle, but it can safely handle three to four simultaneous presses. FYI anti-ghosting keyboards are a staple on professional gaming tournaments.

On a side note, if you're still using Windows XP be sure to be on SP3. If not, you'll not be able to use this monster of a thing. Fortunately I'm on 7. 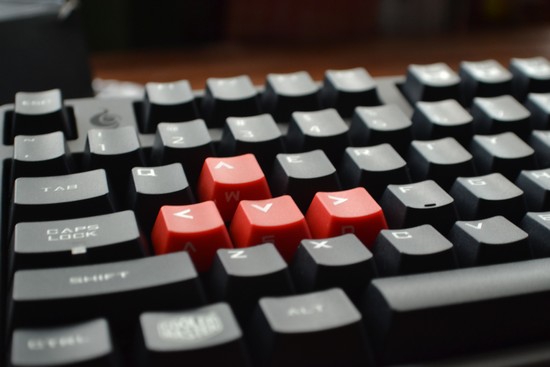 Each keystroke on the CM Storm Quickfire Rapid is like tender heaven. You need not exert too much force on the keyboard itself to assure an input. And even if you do, you would not fear of breaking the keys because of its mechanical Cherry MX switches (although I'm not sure if the Cherry MX built inside is of the blue, black, or brown variety. More on this later). The rate of this keyboard before getting worn out: 50 million keystrokes.

Speaking of Cherry MX switches, I'm unsure as to what variety is built into this keyboard. The back label shows a black switch while pressing on the keyboard itself says a blue switch since it's very noisy and clicky. The sound this version of the Quickfire Rapid gives off is akin to a mouse getting clicked. Imagine all that incessant clicking while playing (or typing a document). It would not be a bother if you're on headphones, otherwise you'll get nuts from using it.

By the way, you can do a Windows key-lock on the Quickfire Rapid. If you have ever jabbed the Windows key accidentally, you know first hand how annoying it is to suddenly call the Start menu and disrupt your A-game, only to find out later that you have already died because of said accidental press. The Windows key-lock feature disables the Windows key, so goodbye disruption, hello optimum gaming performance.

Earlier you saw the red keys on the Quickfire Rapid representing the WASD. Turns out that Cooler Master also threw in a key remover and a set of spare key caps for the WASD and Windows keys, which is not only cool, but functional as well. Typing for a college thesis? Just pull out the red keys and replace 'em. Keys filled with biscuit crumbs in between? Pull all the keys and clean 'em.

The box also comes with a PS/2 adapter, which of course, lets you use a USB-ended hardware on a PS/2 port. I doubt it would ever be used though. Or not. 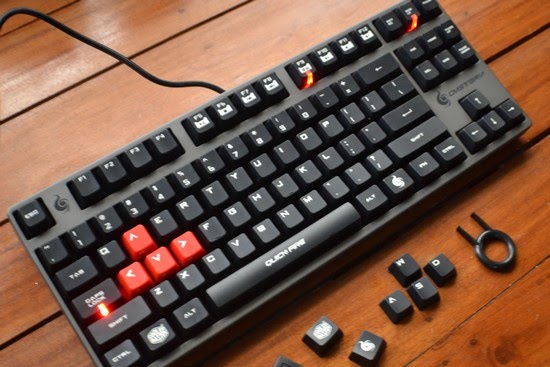 Another point of interest, although not uncommon, are the red lights selected keys—such as the Caps Lock key—give off when pressed. Lights are always a welcome addition to gaming keyboards. Sadly, the characters on the keys itself don't light up, which of course, would've made this gaming keyboard a hundred times more "awesomer" (pardon my word), not that I do mind the extra lighting.

If you like your keyboard rough, tough, and full of heavy metal performance, the CM Storm Quickfire Rapid is for you. With its compact design, excellent feel, and optimum key placement, all your presses would count it's hard to do a wrong press.

However, if you do like your keyboard all dainty and bright, go look for something else. Really, the Quickfire Rapid makes up for the missing macro keys, back lighting, built-in memory, and whatnot with its everything. And if all else fails, you can totally use this thing to smash heads to get even and the keyboard would still be working. 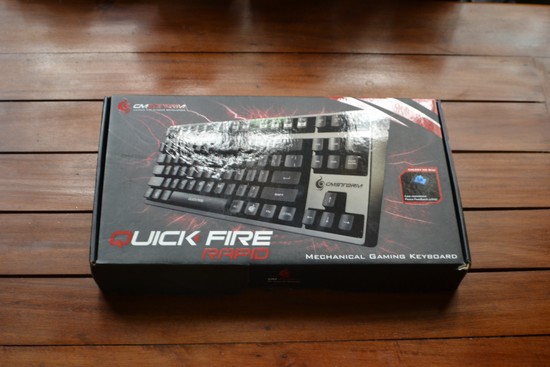 The Cooler Master sells at around PHP3,400.00 (based on the release price of US$79.99. Prices may vary). Sadly, I don't know if this is already available in the Philippines or online only.