With all the ruckus the RIAA and the MPAA is causing internationally, it's just natural that you'll get freaked out if you receive an email from somebody representing to be from the RIAA accusing you of illegalities traced to your IP even if you're clean and innocent. Welcome to the world of spam and scam emails.

Recently I received a spam email from an RIAA address telling me that my IP address have been distributing copyrighted content and that I have to respond by downloading the attached file. Unfortunately for the Russian guys sending this scam email, I've been sent spam emails one too many already.

Before anything else, here's the actual message from the "RIAA": 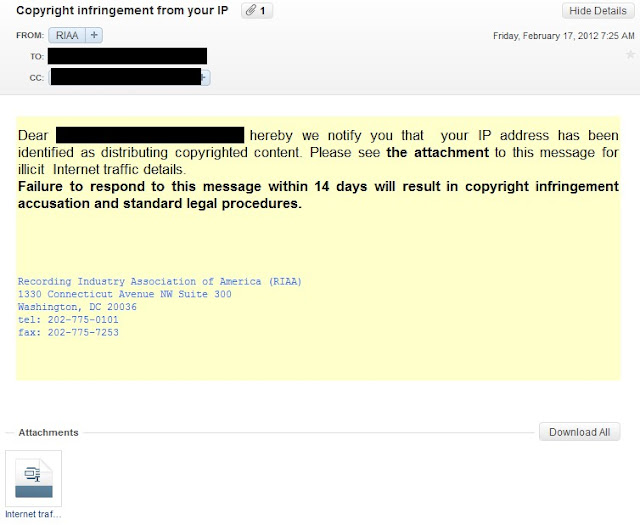 First of all, this is just a scam spam message. The sender of this spam email is trying to trick you into downloading the attachment—which contains a trojan that phones back to Russia by the way—out of fear of getting sued. Honestly I'm quite impressed because spammers have been doing their research. They're like "What's the most effective way to scare people and download our trojan? The RIAA!"

Secondly, if you have done any illegalities, your internet service provider (ISP) will be the one to contact you saying that so and so have filed a so and so against you and we're giving them your records to comply with the law (unless you're Kim Dotcom). Nobody, as far as I know, will contact you through email saying that you're going to get arrested unless you do this and that. At least nobody has done that, yet. Another way is through certified letters delivered to your home.

Bottomline: Just delete the email address. Or, for the sake of fun, scan your behind and mail it back to the sender, using a dummy account of course.

Now, if they have only made this email look more legit, like if they added a couple of more legit-looking logos, they might've gotten away with it.