Tech manufacturing giant Apple recently released invites to selected media for an event to be held at the Yerba Buena Center for the Arts in SF. Thing is, we all know what's coming, and it ain't no iPhone 5. Apple further teases its Appletards with the line "We have something you really have to see. And touch."

At this point in time nobody knows the official name of Apple's newest pad. Would it be called, as everyone has been calling it for months now, the iPad 3? Or would it be, like the iPhone 4 to the iPhone 4S, the iPad 2S? One thing's for sure though: Whatever this new tablet's name is, it doesn't have any home button.

(Related: Photos of phones before and after Steve Job's iPhone) 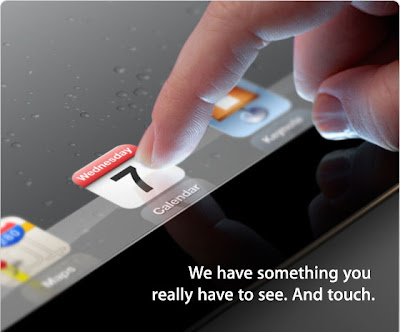 Yes, the ubiquitous home button—that black button with a white square in the center—seems to have been removed from the iPad 3, at least if you base it from the invite above. And it's creating quite a buzz with some people. Sadly we don't know what's running in the minds of Apple engineers.

The iPad 3—as hyped as it is—could be, uh, well, worth it (maybe. I'm doubtful now because of all the new machines that came out in MWC). Pundits are saying that it will have retina display, a quad-core processor, 4G LTE capability, and a thicker body for a longer battery life. Throw in that thing they call Siri too.

And as them pundits are suggesting, sell your iPad 2 now, or else suffer from a fire sale. I'll gladly take yours for a hundred bucks.

Apple's event at the Yerba Buena Center is going to be held on March 7, 2012.