Marvin Agustin’s journey to what he is today—a successful chef and restaurateur—is so inspiring that it became the cornerstone of his latest endorsement for Knorr Cubes.

Marvin recently signed on to become the new brand ambassador for Knorr Cubes, the favorite partner of people like him who are passionate about food and cooking. As such, he is also the new face behind Knorr Cubes’ “Door to door Sabaw Challenge” in which he will be visiting different cities all over the Philippines, challenging cooks to identify which is the better, more ma-karne and better-tasting sabaw: the one made with Knorr Cubes, or not?

During the challenge, Marvin will present two versions of sabaw, one made with granules and the other, made with Knorr cubes. Marvin believes so much in the product’s claims to deliver the meatiest taste and flavor that he throws in a promise to give up cooking if they end up choosing the sabaw that’s not made of Knorr cubes—and everyone knows how passionate Marvin is about cooking, so for him to promise that is a big deal.

Among the locations Marvin will visit are Laguna, Iloilo, and Metro Manila. There will be a series of 30-seconder commercials featuring Marvin engaging cooks and housewives to take part in the challenge. 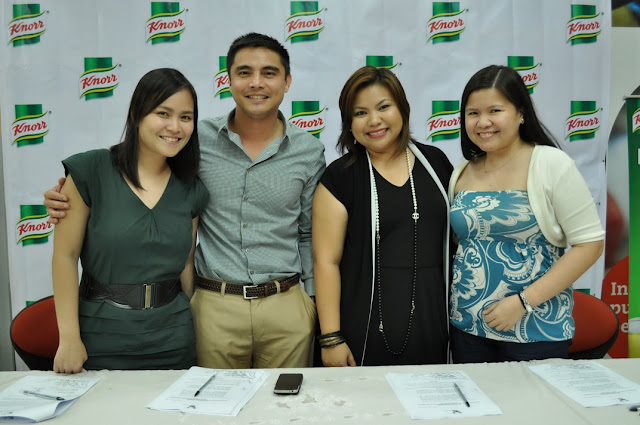 “That’s really what it’s about: Marvin being confident about the product so much that he’s willing to give up his passion for cooking just to prove a point, which is that Knorr cubes is the meatiest out of all the cooking aids in the Philippines,” says Monica Rios, brand manager of Knorr for Unilever Philippines, which is spearheading the Door-to-door challenge.

Marvin grew up in a household where cooking was a passion. Their apartment was small, and from the living room, one could sit and smell what was being cooked in the kitchen.

As a teenager, Marvin worked as a waiter, and later, became a mascot for a popular fastfood chain. From there, he worked his way up, became a popular actor and re-invented himself into a successful businessman with a chain of restaurants that includes Sumo Sam, Oyster Boy, Marciano’s, Komrad, John and Yoko and Mr. Kurosawa.

This is what inspired Unilever to choose him to be the latest endorser of Knorr Cubes.

Says Rios: “It’s a nice success story to hear, that he started out as a waiter, and even worked as a mascot for a while. He has proven that he can rise above all the challenges in life. Now he’s a chef and a restaurateur. It’s very inspiring, the way he was able to achieve everything…maypassion siya, and he just really went for it. So it’s a nice feeling for him to be endorsing the product.”

Marvin feels honored to be chosen to join Knorr’s family of chefs. “When I first learned about it (endorsement), sabi ko, everyone knows that I really love cooking. I love cooking for my friends and my family, and Knorr cubes is really what we use for soup. So napakasaya at family-orientedang pino-promote namin na brand.”