Dual-SIM phones are fairly popular in the bar phone category, but would the introduction of the concept in the smartphone market prove successful? That said, the good folks at Alcatel Philippines loaned us one of their latest Android dual-SIM smartphones, the One Touch Glory 918N, for a test run. Let's see if this dual-SIM Android is worth its price in the market.

The Alcatel One Touch Glory 918N is an entry-level Android running Gingerbread 2.3.5 powered by a 650MHz MTK 6573 chipset. And as "old" as it looks, would this be the solution to your network provider dilemma?

The Alcatel One Touch Glory 918N looks somewhere pulled out of the premium line and put onto the affordable class. It's available in both black and white colors, but its design pattern would be more visible in the latter. Nothing extravagant here: Simple yet elegant as they say. 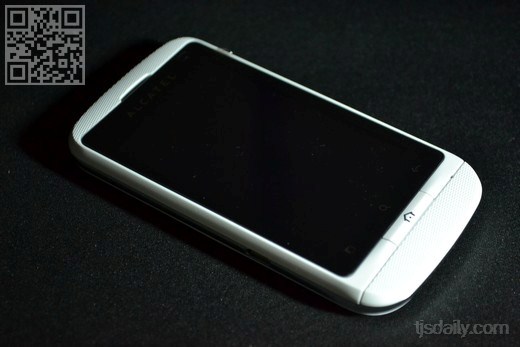 At the left side of the phone is the USB charging port. The other side meanwhile carries the volume buttons and power/sleep/wake button, so well-placed that it flows with the chrome plastic lining perfectly, not to mention the ease of access when trying to increase or decrease your phone's volume or waking it up. 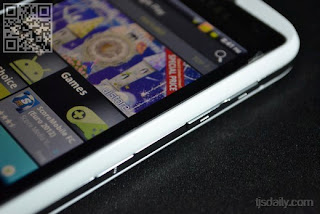 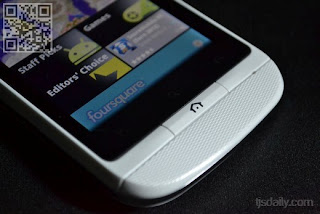 The back panel of the Alcatel One Touch Glory 918N is where the 3.0MP camera (no flash) and the speaker grill are located. The camera portion is raised by a few millimeters from the body of the phone and has the words "3.0 MPXL" written next to the lens itself, which of course the phone would be better off without design-wise. The One Touch section of the back panel is bare and is, like the camera portion, raised by a few millimeters. Constant putting down of this phone on all types of surfaces will inevitably wear the logo out. 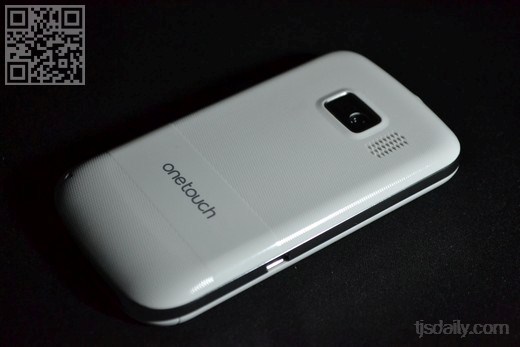 The headphone input is located at the top center of the phone. The bottom portion of the Glory 918N is totally void of any input mechanism.

As for the feel, this small thing weighs enough, the right kind of heavy.It also doesn't feel as plasticky as it looks, and the diamond pattern of the phone really feels great on the hand.

The Alcatel One Touch Glory 918N sports a 3.2-inch HVGA touch capacitive LCD panel with a 320x480 resolution. For its price range, there are phones out there that offer larger screens and better display specs on paper. In contrast, the Glory 918N offers less on paper but more once you turn the phone on. 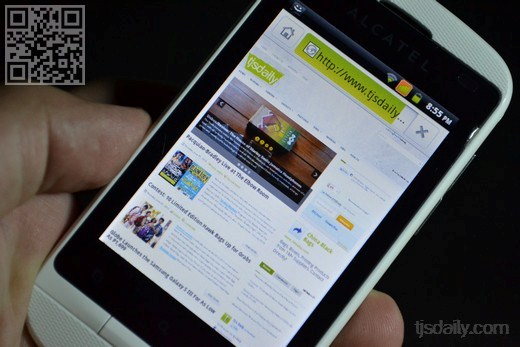 The 3.2-inch hands down is small, but the display is amazing for its price. Regardless of the screen protector you'll put on the display (one is already included in the box by the way), you'll enjoy decent colors and decent viewing angles.

The home Android UI of the Glory 918N is the straightforward no nonsense type. Its app icons are of the circlish square category, imagine Nokia's MeeGo (now called Tizen) on the N9, but on Android. More on games and videos later.

The only problem with the display is its seeming lack of sensitivity to touch. This problem seems to be prevalent in entry level Android phones. Typing messages on the Glory 918N proves to be a challenge with the small screen coupled with sensitivity problems. Otherwise, the phone display is passable.

Running the Alcatel One Touch Glory 918N is a 650MHz MTK 6573 processor coupled with a 256MB RAM. What seems to be an underpowered phone initially would impress even the toughest of critics (to be fair, it really is an underpowered phone when compared to high-tier smartphones, but a tough competitor in its bracket).

The single-core Alcatel One Touch Glory 918N scores a last-place but respectable 876 on the Quadrant Standard. But don't let the numbers fool you. 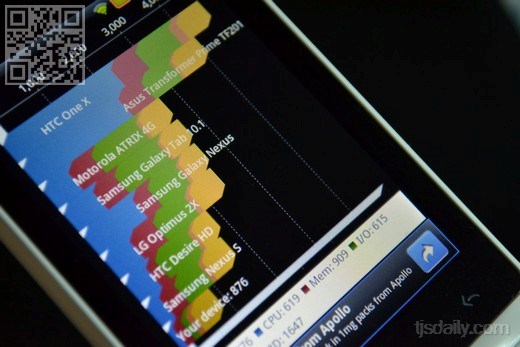 Screen transitions, even at full animation enabled, brings no trouble to the Alcatel One Touch Glory 918N. Standard must-download games such as Angry Birds Space, Fruit Ninja, and Basketball Shoot doesn't show any sign of slowing down or lagging, albeit a longer initial loading time. Websites render quick and fast (website loading time also depends on your internet connection speed). And unlike my experience with the Cherry Mobile Stellar, videos being watched at the Glory 918N get streamed flawlessly, even if you let the phone sleep. No hangs, no force stops.

For a smartphone its size, the One Touch Glory 918N sure packs a punch with its well-made loudspeaker. Located just beside the camera, the sound waves go around your hearing range and not towards where it is pointed. It doesn't lose its integrity and doesn't degrade quickly. Even with something blocking the loudspeaker, it still plays at an audible manner.

For a more personal space in music, the Alcatel One Touch Glory 918N provides stock headphones. Don't expect too much from it though.  It's stock. 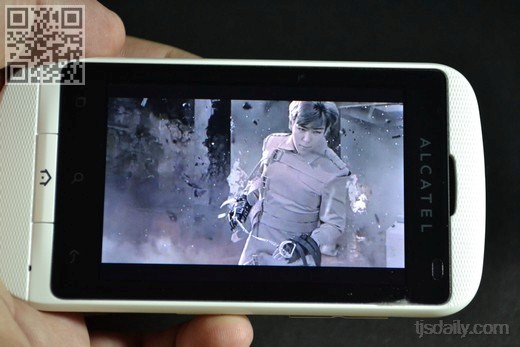 The videos meanwhile, render wonderfully in the 3.2-inch screen. YouTube videos, those of Flash, and most video formats, especially in HD, play flawlessly. No lags. And as previously mentioned, games look awesome on the tiny screen.

The Glory 918N is microSD expandable up to 32GB, so if you have plans of filling up this device with pictures, HD videos, audio files, and games, you'll have no problem.

As previously mentioned, this phone carries a 3.0MP rear camera. Lacking a flash LED, the Glory 918N is a no-performer in low light conditions. But give it some light and it produces one of the most brilliant photos in the low-tier phone market. See samples below: 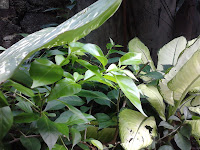 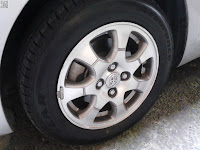 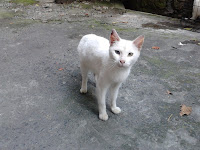 As seen above, photo quality is excellent even with just a 3.0MP camera thanks to the enhancing technology on Alcatel's cameras. And that's without autofocus lens. This dwarf of a smartphone can definitely go head to head with high-tier smartphones in the photography department. 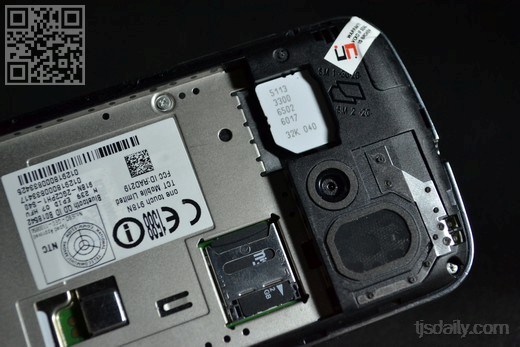 Filters are non-existent in the Glory 918N, obviously because of limited computing power. This is why you should move all apps immediately to a microSD.

Something smaller doesn't necessarily use lesser power. Moderate use of Twitter or Facebook probably, plus texts and a couple of minutes of casual gaming, all on medium brightness, would give you 16 hours of juice before recharging the phone's 1300mAh battery. Playing, surfing, and doing activities on the Glory 918N continuously i.e. nonstop would give you 6 hours tops before going for the plug.

Turning off automated fetch requests from apps, setting the brightness on medium, turning off the WiFi when not in use, and putting the sound on an enough audible level would help extend battery life.

Battery is replaceable and is accessible through the removable plastic back panel.

It is what it is: The Alcatel One Touch Glory 918N is truly an entry level dual-SIM Android to watch out for. Running an old configuration of the Android leaves you with limited possibilities, but if you're after that then you'd better go fetch something else because what the Glory 918N ultimately offers you is your ability to be at two networks at the same time. That plus its power points, such as its display and camera makes this Android smartphone a total buy. 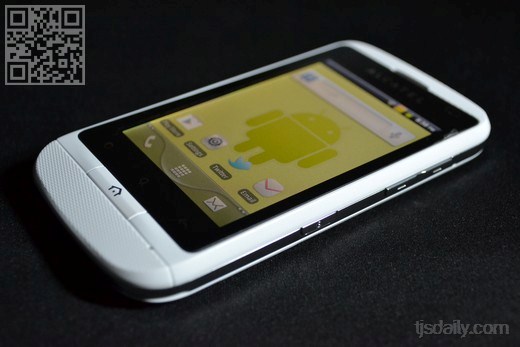 Davids still exist in this era of Goliaths.

The Alcatel One Touch Glory 918N sells for PHP5,999.00 but might be lower by a few hundred bucks depending on the store you're buying from.

So there you go. Share this Alcatel One Touch Glory 918N review on Facebook, Twitter, and Google Plus, especially if you have friends looking for entry-level phones.