Let's face it. The Alcatel One Touch 918N Glory, although a spectacular Android for its price range, has a small display. Too small in fact that people with big digits would find it difficult navigating throughout the UI, even simply making messages. Don't you wish something exactly like the 918N Glory, but with a bigger screen?

The Alcatel One Touch Blaze 985N looks like something only Alcatel would produce; you can't mistake it for any other smartphone even a mile away. 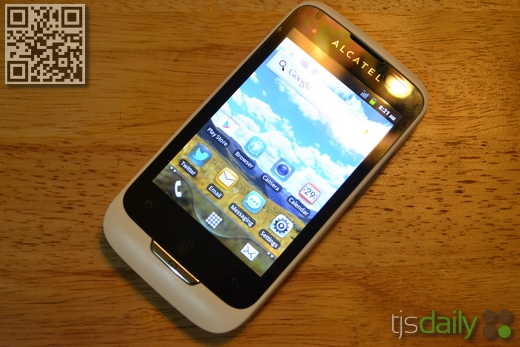 Body-wise, the Alcatel One Touch Blaze 985N looks like its little brother the Glory 918N. The smartphone comes in a horizontal pattern (perhaps for improving grip or just pure aesthetics) and comes in red, black, and white colors.

The front camera of this smartphone is discreetly located at the right of the Alcatel logo. Top of it is the earpiece, which looks anything but a simple rectangular hole in the front. You won't find any metal mesh here. 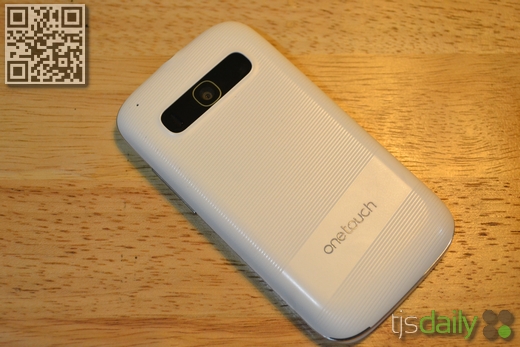 The plastic rear of the OT Blaze 985N, save for the 5MP camera and the One Touch logo, is totally clean and simple. This clean design principle could be found throughout the One Touch series of smartphones. The back panel is easily removable with a snap. Just slip your nail to the little slit at the bottom of the phone and pull.

The camera area of the phone is made of a clear material (glass or hard plastic) that is easily smudged by fingerprints. Be sure to wipe this area clean as smudges can drastically reduce the quality of an image before processing. This area is also where the phone's loudspeaker is found, neatly blended between the black rectangle. 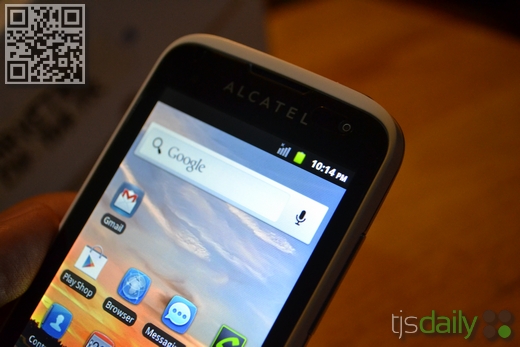 Located at the top of the OT Blaze 985N is a 3.5mm headphone jack and the power/sleep/wake button. The sides meanwhile carry the standard volume rocker and the 5-pin USB terminal. The body is wrapped with a chromed bezel that adds to the simple elegance of the smartphone.

It's worth mentioning that the weight of the phone is notable. The Blaze 985N weighs like an iPhone, only that it's 1 gram lighter. Holding the phone with one hand at extended periods proves uncomfortable.

Included in the box is its stock headphones, a wall charger with a removable cable, a 1300 mAh battery, and warranties, manuals and other supplemental information.

The Alcatel OT Blaze 985N, as mentioned earlier, sports a 3.5" HVGA TFT capacitive touch screen set at 320x480 resolution, the same as the 3.2" Glory 918N. With a bigger display you'd want a higher resolution, but if you hold this in person you'd be blown away at how crisp the screen looks. 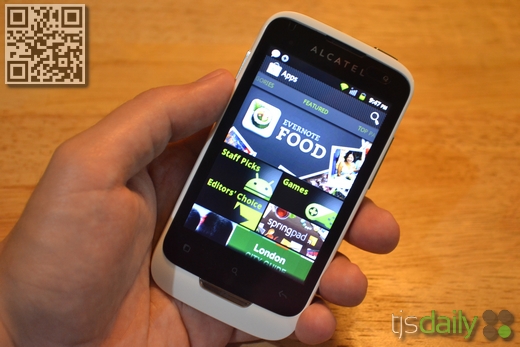 The UI of the Alcatel OT Blaze 985N remains unchanged like the other One Touch Androids: It features the Alcatel swipe-down-to-unlock lock screen and rounded square app icons. The mentioned aside, nothing much is happening here.

Touch sensitivity could be a problem to some users. About 90% of your use of the Blaze 985N would prove easy with a responsive display. What's challenging though—and I have observed this numerous times now—is messaging or just plainly typing text. One could even go as far as saying that there are blind areas at the display, especially at the landscape orientation.

Running on Android 2.3.6 Gingerbread and powered by a 650MHz MediaTek MTK6573 processor (also found in the DTC GT3 Astroid), the Alcatel OT Blaze 985N—when compared even to mid-tier phones—surely lacks the firepower power users are expecting. To its defense, the Blaze 985N can handle most games and services at the Google Play store. Besides, the highlight of this smartphone is its dual-SIM dual-standby capability.

For formality's sake, here are the photos of the Alcatel One Touch Blaze 985N's benchmarks: 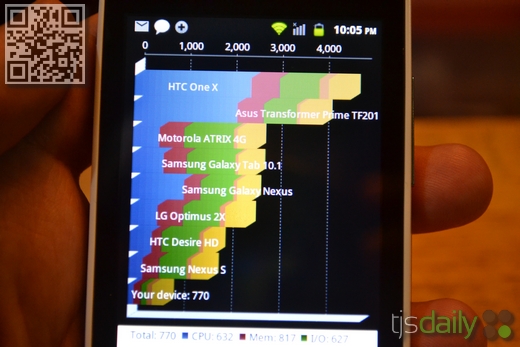 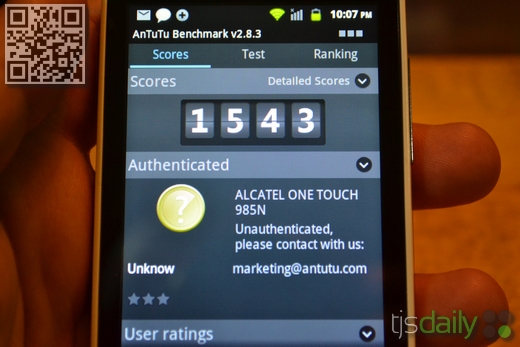 As expected, it hits the floor marks for its overall power. The funny thing is, the Glory 918N received higher marks than the Blaze 985N. Why? I don't know. But for a smartphone that's expected to outperform its cheaper relative, it will be a nagging question for some time to come.

Usage-wise, the Alcatel One Touch 985N doesn't slow down as much as you would expect it to. Websites render quickly and beautifully, apps run smoothly, and there are not much force-close errors from unresponsive programs. Then again, if you download lots of apps that actively consume memory without use and you don't force-stop it or free memory, you would definitely suffer from lag. There would be no missing UI icon errors after heavy computing usage though, unlike other more affordable smartphones.

Two things that a power user can find wonderful with the Alcatel OT Blaze 985N is: 1) It supports Skype video chat and; 2) One SIM slot is 3G capable.

Remember the said above on how amazing the display of the Alcatel Blaze 985N is? Here's where it comes into play: HD videos.

Let's put things in perspective first: The display of the Alcatel OT Blaze 985N, when pitted against 4" Gorilla Glass 2 AMOLED display monsters, won't even try to hold a candle. It would be silly to compare a flagship phone to the humble Blaze. Compare it to something more closer to home though, now you have a contest.

From the UI to the home screen to playing games and videos, this smartphone really does spit out crisp images. It may not be retina, but it's something that passes wonderfully. 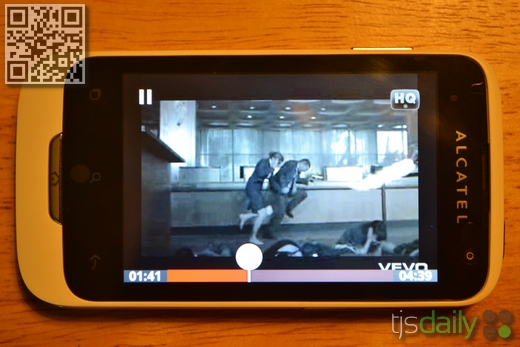 It's worth noting that applying any sort of screen protector, clear or matte, no matter how magnificent the resolution is, would ruin the display quality of the smartphone. If only GG2 were equipped on all smartphones.

At the sound department, the Alcatel One Touch Blaze 985N is in the clear. It has no problems on loudspeaker: Sound integrity doesn't degrade easily, sound direction travels around, and sound clarity is cool, not canny.

The Alcatel OT Blaze 985N is microSD expandable up to 32GB.

Inasmuch as this smartphone's capabilities are concerned, its 5MP camera is a huge downer. You'd expect that, as good as its display is, it would pack a punch. But frankly, no it doesn't. 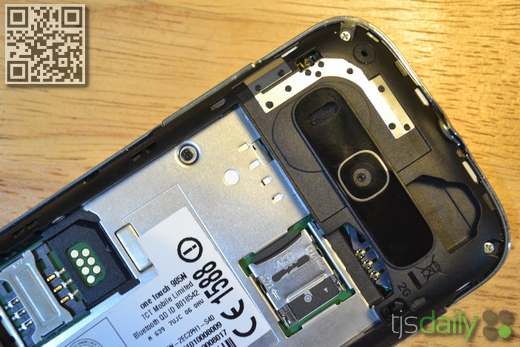 Adding insult to injury, the Blaze 985N's camera has no flash. And that's just half of the problem: Its smaller sibling the Alcatel OT Glory 918N, as far as this review is concerned, takes better photos with its 3MP camera (no flash). 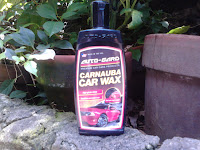 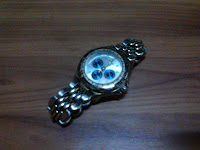 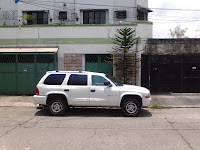 Poorness of photo quality is very pronounced with the given sample. Then again, the Blaze 985N can produce wonderful images with the right amount of angle, timing, and lighting.

For casual, fun photos, the Alcatel One Touch Blaze 985N is good enough.

This Android's battery life would last at least 6 hours on maximum usage, including videos, gaming, sounds, and browsing. Unfortunately 3G wasn't included in the tests ran on the smartphone. WiFi was used instead. 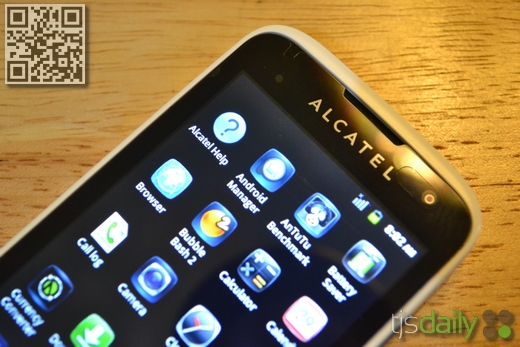 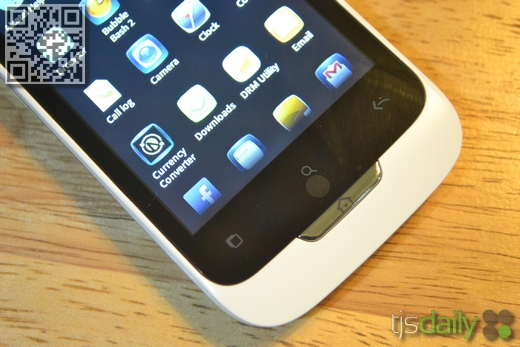 Battery is replaceable through the back panel.

If a small-screened dual-SIM smartphone won't suffice your daily needs, you've got a winner in the Alcatel One Touch Blaze 985N. Not only is it affordable, it also offers the minimum standard on OS, on cameras, on display size, and on display quality. 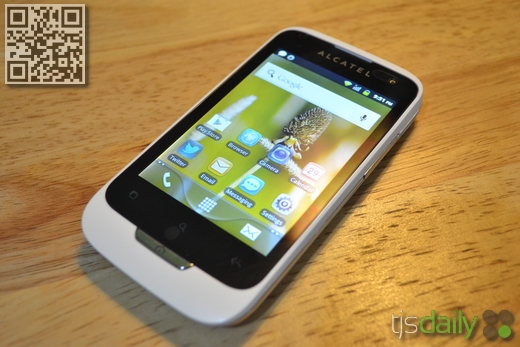 If you're looking for another notch higher than the Blaze 985N however, be prepared to shell out at least P10,000 or more. But if you think this smartphone is the perfect one for you, it retails for around P7,999 or cheaper (Alcatel PH might've implemented a price cut we aren't aware of).