Globe, the PH's second largest network in telecommunications, recently announced their own 4G LTE service to launch before the end of this year. Peter Bithos, Senior Adviser for Consumer Business of Globe Telecom, announces that this is part of Globe's $700-million network modernization program.

Although no key dates or price rates were announced, the Globe brass said that consumers should expect the 4G LTE service to be up during the early fourth quarter of 2012, and that their rates would be very competitive. Although they were tightly-lipped—presumably so that they would not accidentally leak any detail—they have also announced numerous LTE compatible devices that would launch before the end of this year (yes, we're also thinking iPhone 5). 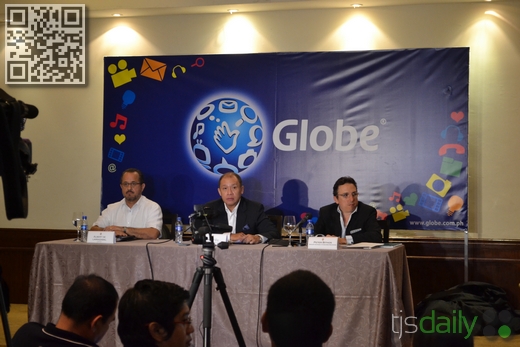 Left to right: Albert de Larrazabal, Ernest Cu, and Peter Bithos
Among the earliest cities to benefit from Globe's 4G LTE service is Makati, the nation's business hub. This comes as Globe's shift in strategy from placing short-ranged LTE hotspots around the metro, to centralizing the LTE service within regions that are expected to have heavy usage i.e. instead of having one hotspot in a street in Makati, a huge land percentage of Makati would be the hotspot itself. Globe expects to quickly roll out their 4G LTE service to other key regions in Metro Manila.

Ernest Cu, Globe Telecom's president, mentioned that today's networks aren't really designed for internet access, that instead it was, to an effect, piggybacking on infrastructure designed for telephone and mobile access. With their modernization program however, Globe subscribers would enjoy dedicated services that would surely up consumer satisfaction.

Globe was first to introduce 4G technology in the Philippines in 2009, with the deployment of its WiMax network. In the same year Globe began testing 4G LTE in the country, with speeds clocking up to 100 mbps and field tests in highly populated areas in Metro Manila yielding up to 60 mbps downlink data throughput rate.

To date, Globe has a total of 2,700 4G sites across the country. It is highly expected that before the end of 2012 that number will increase to over 4,000 sites.