Mark Zuckerberg is always being pestered by the tech industry about the elusive Facebook phone. When is it going to be produced? What'll be its specs? Will it feature a whole new Facebook experience? Well, they should quit that incessant asking and look at the Cherry Mobile W3, our very own Facebook phone.

The kind folks sent us a Cherry Mobile W3 to review. It's bright, it's white, and it's alright. They don't call it the Like Phone for nothing. Read with me through this review and decide if this affordable phone is for you. 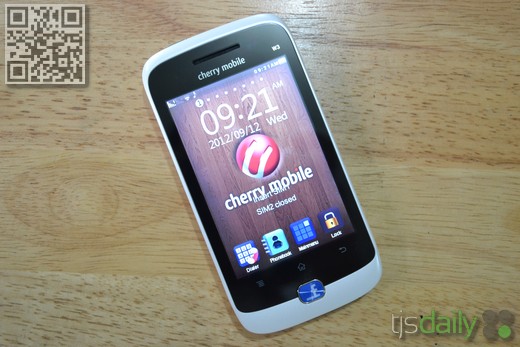 The back side meanwhile carries the 3MP camera (lined by a metal strip. Sadly, the W3 has no flash), the 2-liner speaker grill, and the company logo. Other than that, it's totally a bare back, no pattern whatsoever; Honestly, the back reminds me of an Xperia phone: Just bare and smooth with only the camera, the company logo, and the speaker grill on. Simple elegance.

There's a nail slot at the bottom for snapping up open the battery and SIM compartment. 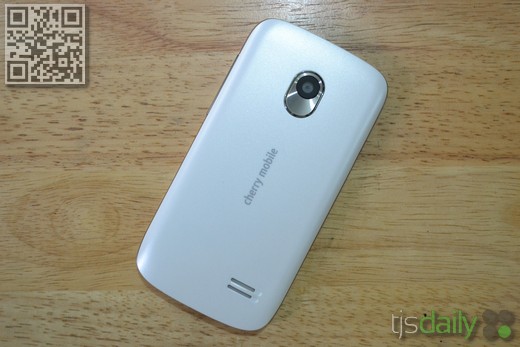 The sides are lined with a chrome bezel. To the right is where a nondescript volume rocker is located. The top has the sleep/wake button, and the bottom has a micro 5-pin USB port and a 3.5mm headphone jack. 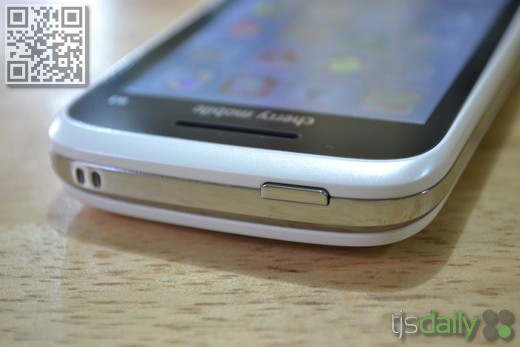 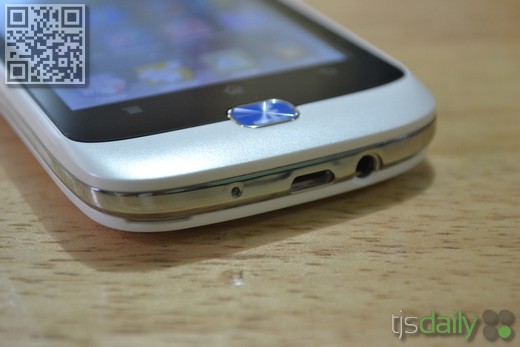 The unit's heavy enough to not feel very cheap, but the body being surrounded with cheap plastic and the screen's lack of gloss, it just negates the former. To its credit, the W3 is slim and slippery enough to just slide down in your pocket.

The Cherry Mobile W3 is available in black and pearl white.

The Cherry Mobile W3 has a 3.5" full touch capacitive LCD display, the size being the same with most of the entry-level smartphones today. I personally don't know the resolution, but I'm betting it's at 320x480. 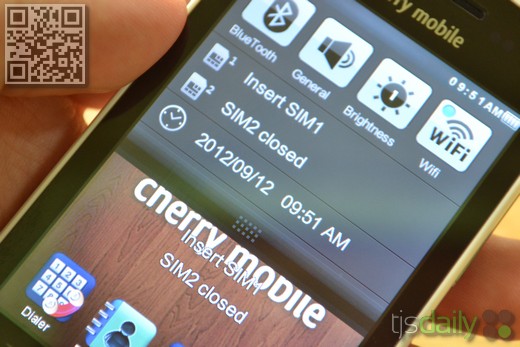 The screen is bright but seems to have a low contrast, leading to a minor wash of colors. To its credit though, the W3's screen has decent viewing angles. Passable display overall.

Touch sensitivity on this phone is great. Swiping on the home screen and creating messages are smooth. Swipe-down menus from Android has also been emulated, which is a very welcome addition. I personally loved it. Another thing that I loved so much is the phone's hold-to-unlock feature at the lock screen. It's the first time I saw such a workaround from Apple's slide-to-unlock, and it's awesome. It reminds me of a game loading screen. But alas, lag is very noticeable when at the menu UI (it's not the display's fault, but the innards). An entry level-phone can only do so much.

The home UI is based from the iOS (it even has a dock). And like the iOS, if tap and hold an app for a few seconds, it'll jiggle. You'll now be able to freely switch it around.

Lastly, there is no landscape orientation on the W3 while texting, or for any other matter. Correct me if I'm wrong, but I can't find the option to turn it on, if there's any.

With some of important specifications undisclosed, we can't help but wonder what's powering this phone. It's no dual-core I give you that, but its ease of use combined with its smooth flow (at least most of the time) makes its faults seem to go away.

The unit is WiFi capable (thank God for saving this one from WAP). So as long as you have WiFi around the area you're in, you're good. Applications that take advantage of the WiFi capability are already programmed in, such as Twitter, Facebook, and Opera. And although they're a far cry from what these apps look like in an Android, I must say the former decently does the job. 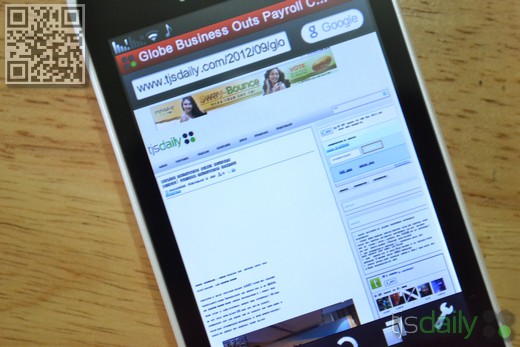 Surfing with the built-in Opera app is quite challenging. On one hand, you have no landscape (which I absolutely can't stand. Then again, it's just a matter of preference). On the other, websites render slowly and once you scroll down the already rendered parts start rendering again. Pinch-to-zoom and double tap-to-zoom features, although present, are difficult to deal with. But as I've mentioned, it does the job.

Gaming with the Cherry Mobile W3 is cool, insofar as the built-in games are concerned. I observed no lag and it was all smooth sailing. Some apps do have a noticeable loading time. But you're not after that, you're after this phone's dual-SIM dual-standby capability.

Playing music using the W3 will remind you of other entry-level Androids. It's loud, but at its peak it may sound canny. It's great for casually playing music to just listen to something. If unfortunately you don't have an SD card installed or simply don't have music, don't worry. There's an FM radio to waste your time with.

The Cherry Mobile W3 is also perfect for audio playback of recorded lectures from professors or discussions from meetings (there's a built-in recorder application). 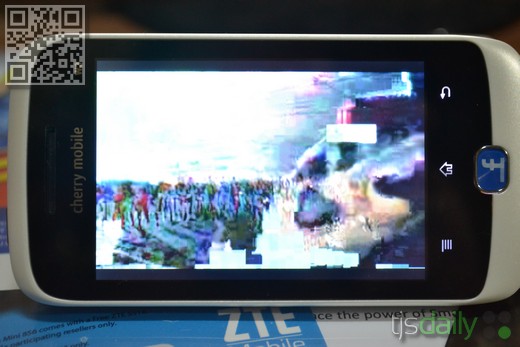 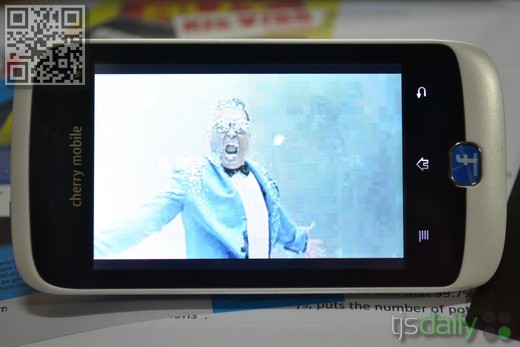 Meanwhile on the video side, yes, you can watch YouTube videos, or any other video website as long as it's mobile supported. Unfortunately, even with HD, video pixelization is prevalent. Imagine a field-transferred movie on a wide LCD TV, that's how pixelated some videos are. To that effect, watching videos on the W3 is great as long as you're not touchy about the pixels.

*Audio and video quality also depend on the format being played

Surprisingly for the Cherry Mobile W3, its 3MP camera takes acceptable photos as against to some more expensive entry-level Androids that carry 5MP cameras with them. Like a good friend of mine always says, it's not always about the megapixels. It's also about the wellness of the make. And to think that the W3 has no flash. Untouched sample photos of the W3 below. 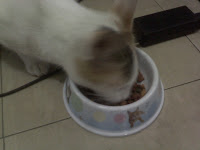 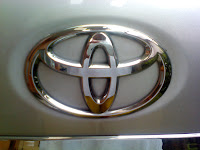 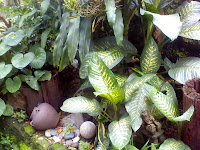 The camera capabilities go out the window once indoor lighting is used as a light source. Images are also admittedly not meant for high definition shots. Photos taken with the W3 are perfect for social media uploads and such (that's why there's a dedicated Facebook button right there).

The Cherry Mobile W3 has 1200 mAh for a battery. But due to the phone's non-smartphone nature, it takes a bit more time to drain this thing down. Sadly, I think the battery meter is bugged because even after 5 days of standby, it still reflects a fully-charged status. 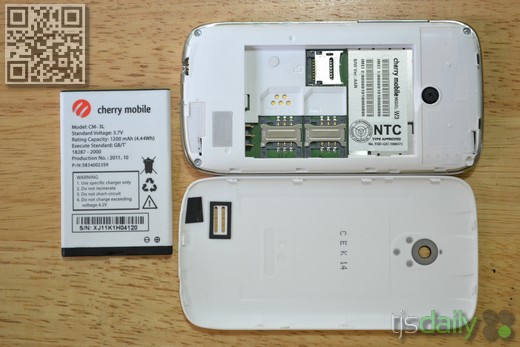 Casual texting and surfing brings the battery life to about 8 hours at moderate display brightness. And yes, playing YouTube will drain the battery like hell.

If you're out of budget, not selective about what kind of phone you'll be using, and a power texter, the Cherry Mobile W3 is perfect for you. Not only would it meet your requirements, it's also well-made and light in the pocket. 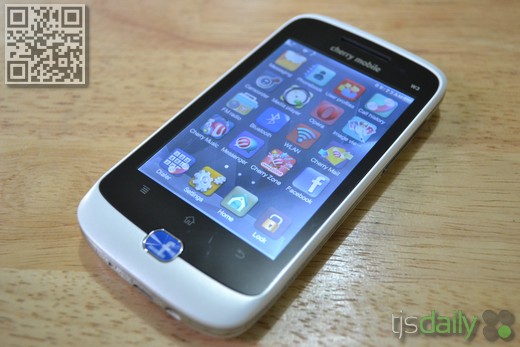 What's more is, you'll get to Twitter and Facebook thanks the this phone's WiFi capability. It may not be revolutionary, but a 3.5-incher that's dedicated to social networking, now that's respectable. Heck, it even has elements of the Android and iOS operating systems integrated in itself.