With the arrival of smartphones, portable video cameras have been sidelined for the longest time. But with the resurgence of interest in glasses-free 3D technology, things may just take a whole new turn for camcorders.

Enter the Sony Handycam HDR-TD20V: A portable camcorder capable of recording in both 2D and 3D plus the ability to capture stills, and good ones too. For the few weeks I've been with it, all I have to say is it was a great experience. Now if you're interested in a camera that captures 3D and 2D, let yourself through this review and find if it'd fit your style.

The Sony Handycam HDR-TD20V, simply put, looks awesome. Then again, almost every piece of hardware Sony churns out has a killer appeal. You can even say it looks like a mini-sub toy with a flashlight. And from a design point-of-view, it's a vast improvement to its predecessor the HDR-TD10E, making it more appealing. 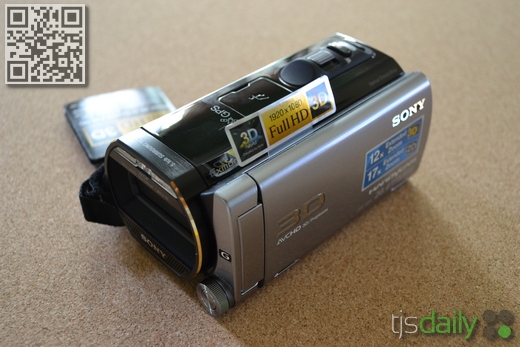 The device, as with all recent Sony entries to their Handycam line, is small and nice to the touch. It comes only in a black/silver scheme that fits the model well.

On the front of the camcorder lies the Exmor R-powered dual-sensor dual-lens camera that enables the device to capture real-time 3D. Near the lens at the lower right is the manual control dial for dual-lens focusing.

At the left side of the HDR-TD20V is the rotatable flip viewing screen that is also touch-capable, so you can input real time commands while capturing video or on pause. Flipping it over unveils a whole new panel full of manual command buttons and input ports and slots. 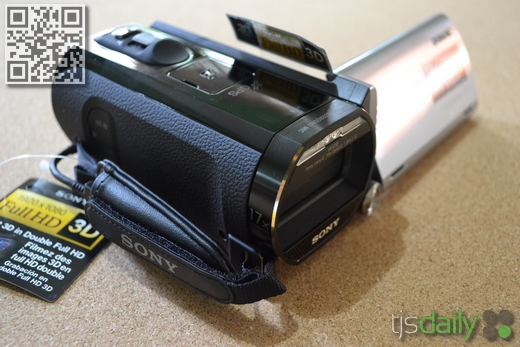 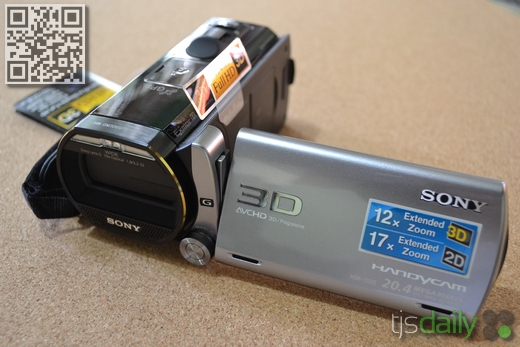 The right side of the device features the very comfortable hand slot with a smooth patterned material to boot. The velcro strap is adjustable and also carries a standard USB cable—fully attached and non-removable— for easier transfer of photos and videos. It's also where the DC IN port is located.

The top side is where you can find the wide angle/telephoto (W/T) knob, an instant photo button (snaps instantly even in video mode), and the mode button. 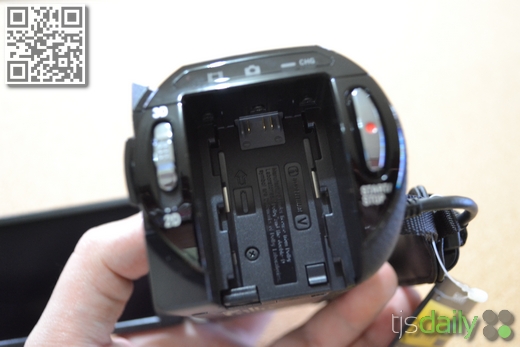 And lastly, the back side carries the battery, the 3D/2D switch, and the record button. These plus the status indicators make for a nice rear for the Sony Handycam HDR-TD20V.

All in all, the design not only looks good, it's also operation friendly.

The Sony Handycam HDR-TD20V's small touch panel shows lively and crisp colors in high definition 2D. In its 3D mode though, it just goes to a whole new level. See, you can view what you're capturing in 3D in 3D. 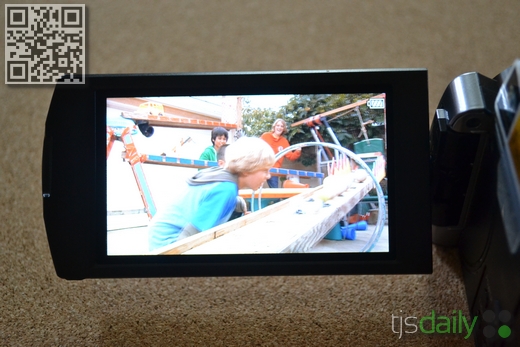 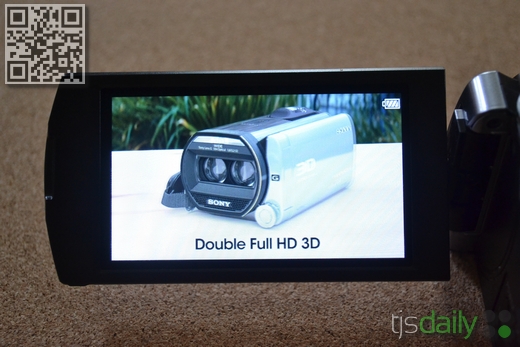 As you can see with the photos above, we were not able to capture the true essence of the display's HD 3D. Get this though: imagine yourself walking into that 3D TV exhibition room and you seeing those stock 3D videos from a Samsung 3D TV right before your eyes without 3D glasses on, stretching your arm as if to touch what's right in front of you. Eye-popping. That's exactly how it feels like, albeit with a much smaller screen (3.5″ Xtra Fine LCD 1229K with TruBlack technology) and with much less power because come on, a full-fledged 3D HDTV is going to beat a small 3D LCD display hands down any day.

Now this is where it gets serious. The Sony Handycam HDR-TD20V runs a dual-lens system similar to last year's HDR-TD10E. It's also equipped with two back-illuminated Exmor R CMOS sensors for capturing video in low light conditions. Those two bug eye lenses capture two videos simultaneously, processing it, overlapping both for a 3D effect on 3D mode. It's what Sony calls the Double Full HD 3D. 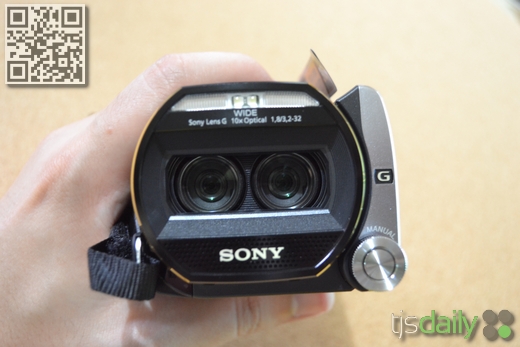 The Double Full HD 3D playback on the 3.5" display is wonderful, as I have mentioned above. I even compared the experience to a full-fledged glasses-free 3D TV. Sadly, not everyone owns a glasses-free 3D TV—not even me—so I wasn't able to test it. To that effect, I won't give an opinion on 3D TV playback.

The Sony Handycam HDR-TD20V's 2D video, though as not as captivating as the 3D to a lesser extent, is definitely one of the best a camcorder can achieve. Thanks to the Exmor R sensors on the dual-lens, you can see everything the camcorder is capturing, even in poorly lit environments.

2D videos are on 1440x1080, not on the same scale as the device's 3D (1920x1080), but still is high definition. Zooming works real time without lag and lens refocusing, adding credibility to the power of this small machine.

Videos won't be complete without audio. The HDR-TD20V's built-in mic is running 5.1-channel surround, and is located just below the lens. The mic placement is prime and optimized to catch incoming and surrounding sound, even ambient noise.


*Video integrity may change when uploaded at a third party service

If you own a point and shoot or a DSLR and aren't very picky about the pixels, the HDR-TD20V's photo mode will do wonderfully for you. The dual-lens comes with 20.4MP, 10x Optical Zoom, and 17x Extended Zoom that would snap up images that's good for the everyday snapper person. But like I said, the device would only work for you if you aren't picky about pixels.

The following sample photos are untouched and were captured via the HDR-TD20V's 2D photo capture mode. No tripod was used while capturing these images.

The included battery is officially called InfoLITHIUM® with AccuPower™ Meter System NP-FV70. As long as the name is, the battery life seems to be sufficient for conducting regular camcording. I used a combination of videos and photos on it and it just hit the red at around the seventh hour. Pretty decent for a square-ish battery.

As mentioned above, the left side of the HDR-TD20V houses an array of buttons and terminals. There's an SD card slot here for those who want to expand memory (the device comes with a 64GB internal memory), a 3.5mm headphone jack, a 3.5mm mic jack (presumably to capture sound better), an HDMI port, a USB port, a power button (the device turns on once you flip the display open), a play button, a button for the front torch, and a button for 2D/3D toggle. 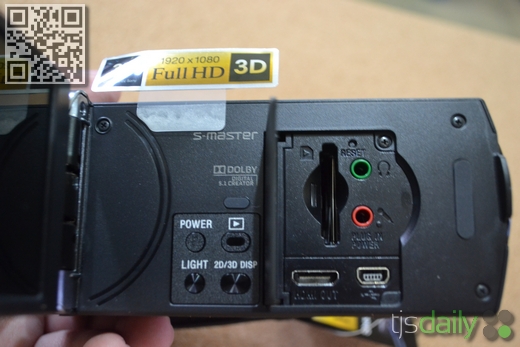 Yes, this camcorder has GPS. Its biggest use is the tagging photos and videos at a specific location. Say, you went to Venice, snapped up some photos there, and enabled GPS. The device would tag your photos to a specific place in Venice (accuracy to meters unknown) and would show it later to those who would view it. But alas, GPS technology on portable video cameras is more of a novelty than function because of operational difficulty and because it's unnecessary.

The Sony Handycam HDR-TD20V's wind cut seems effective. I captured videos on a rather windy place, camera face against the wind, and no noise seems to register on playback, even with headphones on.

This device was launched at CES 2012, and it's a big update to the bulky HDR-TD10. It has an improved image sensor, a higher pixel count, a hugely redesigned body, plus GPS to boot. But all these are jack because the main attraction of the HDR-TD20V is its capability to record in 3D. 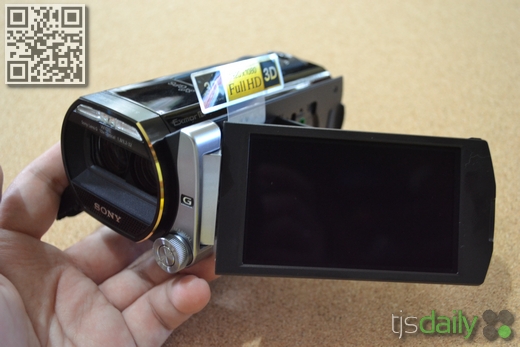 Performance-wise, I was fully content with how it did its job: it captured video and audio fantastically; battery life is superb; overall handling is very user-friendly. Another good thing about it is its usability right out of the box. You don't even need to purchase extra memory.

The Sony Handycam HDR-TD20V is truly a machine to flaunt; not only does it capture fantastic video, it does so through 3D. If you're ready to embrace what could possibly the new display frontier and be captivated by eye-popping images, this camcorder is for you.

The Sony Handycam HDR-TD20V has a standard retail price of P119,999.00. If you have this huge an amount of money to spare for a 3D camcorder, this is definitely worth it.