Home » Samsung » What to Expect at Google's Oct. 29 Android Event

What to Expect at Google's Oct. 29 Android Event

So we've heard that Google will have a huge Android event at October 29, 2012. That's just a couple of days now. But what would be unveiled at that event? Would they unveil a new super Nexus phone? How about another tablet? Fortunately for us, rumors are aplenty across the vast internet ocean. Here's what we know so far:

This seems more of hammering down the nail rather than something to expect. We've seen the 32GB Nexus 7 from Japan, we've seen it listed at a store, we've already expected it. Then again, we shouldn't ruin their cake day. What we can't confirm though is the mysterious second Nexus 7 that reportedly has HSPA+ (3G) capability.

"Codename Manta", a 10-inch Samsung Tablet, would be revealed

Also known in the industry as the Nexus 10, Samsung's 10-inch tablet would allegedly run 4.2 Jelly Bean (previously known as the Key Lime Pie Android OS) and offer a 2560x1600 resolution with 300ppi. This is currently all the industry knows, but another tablet from Samsung?

The LG Nexus 4 would finally be official

It has been in the internet for weeks, and was almost trumped by a fake Sony Nexus X. The LG Nexus 4 is the product of the Google-LG collaboration and is the replacement to the Galaxy Nexus. 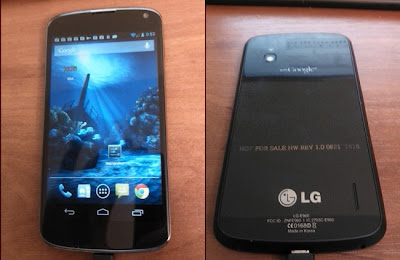 Formerly identified as the LG "Mako", the LG Nexus 4 would have impressive specs. And it being in the Nexus name, expect fantastic after-sales support. Read more about the LG Nexus 4 here.

The playground is open, so is Jelly Bean 4.2

Apparently the world is not ready yet for another new OS (Gingerbread still takes majority of the Android OS pie as against to ICS and JB), so Google decided to stick to the Jelly Bean branding with its new 4.2 release. It seems that Key Lime Pie would just have to wait.

Unfortunately, we weren't invited to Google's Oct.29 Android event. In effect, we'll just have to watch in the sidelines—that is, we'll tune in to the live stream and write about the things Google would release on this date.

My question to you is, would Google trump Microsoft at their same-day event (MSFT would also have an event at the 29th on San Francisco)? What do you think?