By now ASUS has a reputation of producing great products, the PadFone line and the Nexus 7 to name a few. So being the company they are, they quickly jumped on the opportunity and developed a batch of new Windows 8 devices. But with all the rage against Microsoft's newest operating system, how would ASUS' measure up?

Last week, ASUS Philippines unveiled a range of new gadgets, composed of tablets, portables, and an All-in-One PC. The company claims that these products "offer unprecedented ease of use through a combination of innovative design and intuitive multi-touch control." Enter the TAICHI, the ZENBOOK Series, the VivoBook Series, the VivoTab Series, and the All-in-One PC ET2300. 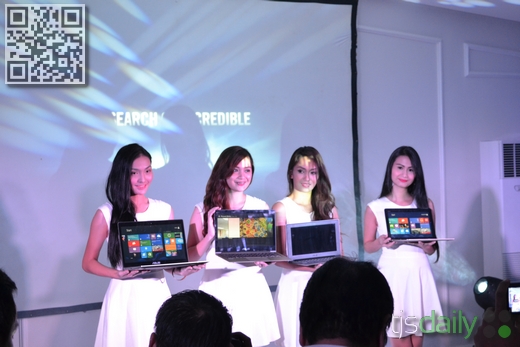 I don't have the slightest clue why ASUS named this device the TAICHI, but the device itself is promising. Its biggest feature is its dual display, a notebook-tablet fusion if you will.

Lid open, you have an ultrabook. Lid closed, you have a tablet. And yes, it's still light and thin enough to be carried around normally.

Seeing that Windows 8 is optimized for touch-screen devices, wouldn't it be proper for ASUS to produce a portable that has touch? If you're looking for an affordable Windows 8 mobile computer with touch, the VivoBook might be just for you.

Available in 11.6” and 14” variants, the ASUS VivoBook X202E and S400 "showcase an attractive, durable, and very portable design" while having integration with the ASUS SonicMaster audio. They also feature a 2-second instant-on, and a free 32GB web storage good for three years.

All-in-One PCs have been around for quite some time, but has yet to make a dent in the personal computing industry. That could change with the arrival of the ET2300 AIO PC.

Sporting a 23-inch IPS LED HD display, the ET2300 AIO PC is a full-fledged desktop capable of handling what your ordinary rig can do and more. It also features a 10-point multi-touch capability which makes handling Windows 8 a breeze (yes, you can slice fruits in Fruit Ninja with ten fingers).

Some choice specs of the ASUS ET2300 AIO PC:

Aside from the products mentioned above, ASUS also launched the ZENBOOK Touch and the VivoTab RT. The company promises to make these Windows 8 products available soon.