Good news for retrogaming fans and all those who want to experience the 90's scene: the Neo Geo X has arrived.

We've heard about this mean machine since January of this year (it was confirmed in March 2012), and it's everything you'd expect it'd be for a 90's gaming device modernized for 20 years later: It sports a 4.3-inch LCD screen, a stick instead of a directional pad (for a more arcade-y experience), four command buttons, four shoulder buttons, volume and brightness buttons, a menu button. a start button, an A/V out slot, a 3.5mm audio port, an HDMI slot, a 5-pin USB port, and an SD card slot. Whew. 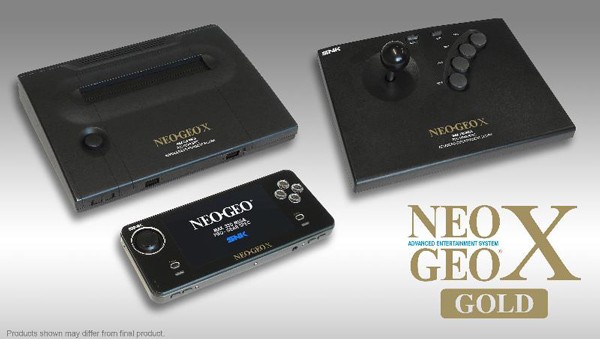 Handheld aside, there's also the Neo Geo X Gold bundle. This set includes the Neo Geo X, an arcade stick, and a functioning AES (Advanced Entertainment System. It's actually the Neo Geo X's charging dock. It opens up like a suitcase, and you can actually put the handheld inside and plug it in to charge) console replica, which will bring about the greatest nostalgic experience, if you don't own the first machine of course. You can plug the AES replica on any current gen TV and just play away.

It's not as attractive as it was decades ago, since we have incredibly powerful consoles and game engines, rendering the Neo Geo X obsolete even if it was remade a hundred times over, but the appeal here is the trip down to memory lane. You can't buy memories, but you can at least try to relive them. There are also rumors that "new" games would be published for the console in the future.