Google just officially outed the Chromebook Pixel, a Gorilla Glass-equipped laptop with a 12.85-inch, 2560 x 1700 touchscreen display, the highest resolution setting ever on a portable. At least that's what Google's Sundar Pichai said.

While not the champion we would like it to be (I'm looking at you Nexus), the Google Chromebook Pixel sports some serious power under the hood: a Core i5 processor, an Intel HD 4000 graphics card, and 4 gigs of RAM. These specifications mean it more or less has the same performance as current Windows ultrabooks. Sadly, all this power means a significantly shorter battery life: five hours, the company says. 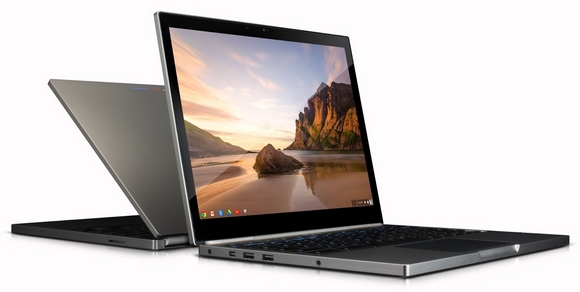 As polished as the Chromebook Pixel is, it's still ways away from Apple's MacBook or any other equal-performing Windows device. As a Chromebook, it relies heavily on web applications such as Google's own suite that can directly open and edit Microsoft Office files, whereas the former can make do without internet connection.

Another point of controversy is the Pixel's steep price. There could be cheaper but similarly effective and efficient portables below $1,299. Just add $200 more and you have a 13-inch MacBook Pro with Retina Display. Pichai defends the pricing of the Chromebook Pixel by saying something to the effect of "this is for people who demand premium hardware and is ready to embrace the future."

The Google Chromebook Pixel will have two configurations: a WiFi model with 32GB storage is on sale today for $1,299, and an LTE version with 64GB storage for $1,499 in early Q2. Both these configurations include 1TB of Google Drive storage for three years.

For more information, go to the official Chromebook Pixel page.