Local mobile brand MyPhone officially launched the A919i Duo today at the SM North EDSA Annex. The device—which has been in the rumor mill for the past few months—is the country's second quad-core smartphone a few months behind the Cherry Mobile Flame 2.0. The event itself had a decent turnout, considering the device's price to be a total steal.

The MyPhone A919i Duo is a toned-down Micromax A116 Canvas HD (which we called out ideal for rebranding last January). It sports the same specs as the A116 Canvas HD, most notably the 1.2GHz quad-core processor, but with only 1GB RAM. Nevertheless, it still is a great smartphone. More on this below. 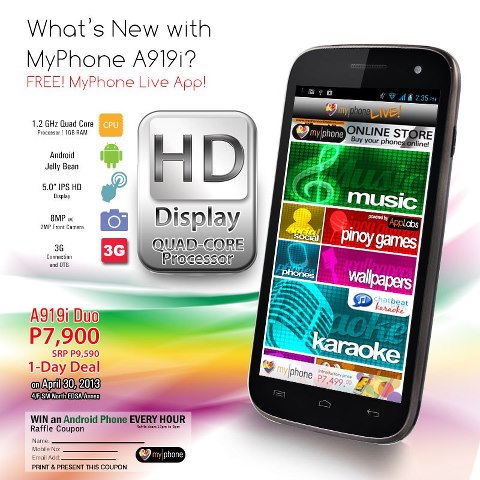 The MyPhone A919i Duo initially is only available in Metro Manila. It's possible that it'll reach different corners of the nation soon due to the company's "sufficient stocks." Meanwhile, it's currently selling for an introductory price of P7,900 (apparently its SRP is P9,590).