LG made waves a couple of weeks ago when they introduced the high-end LG G2, moreso when it officially became available in the Philippines. And perhaps to commemorate the smartphone's entry to the local mobile market, the South Korean company is holding an exclusive 1-day sale this October 20, 2013 together with premium items worth P9,500 for free. 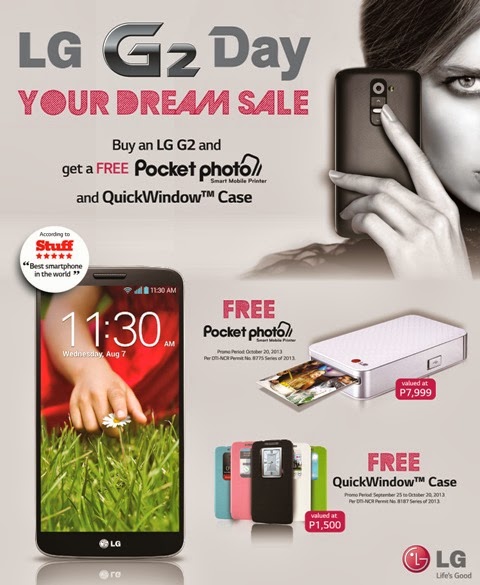 (Related: LG G2 Specifications and Price in the Philippines)

Every purchase of the LG G2 this coming Sunday entitles buyers to a QuickWindow case for the smartphone worth P1,500 and the recently launched LG Pocket Photo Printer, now on sale separately for P7,999. The QuickWindow is a flip case which features a "window" on the front cover to let you see alerts on your new LG G2. The Pocket Photo Printer meanwhile is a small mobile printer which connects to iOS and Android devices via Bluetooth or NFC and prints out whatever you want it to print on-the-go. It's perfect for those who want physical copies of their photos and whatnot.

The LG Pocket Photo Printer and the QuickWindow case will be bundled with the LG G2 and will sell for only P27,990. We just hope that this pro-consumer event would be successful and won't end up like the LG Optimus 2X event of years past.