Finnish smartphone manufacturer Nokia recently launched the Nokia X in the Philippines. The company's first Android, it features a modified version of the Android 4.1.2 Jelly Bean, making the interface look more like a Windows Phone.

The Nokia X sports a 4-inch IPS LCD, a 1GHz dual-core Snapdragon S4 Play processor, a 512MB RAM, and a dual microSIM feature. Sadly, as it's a basic device, it only comes with a 3-megapixel fixed focus camera. It also features a tiled-design, much like what you would see on a Lumia, and Fastlane, a task manager that keeps a record of your most used apps and activities.

“The Nokia X would be a great device for Filipinos with Fastlane, signature Nokia experiences and a number of third party apps, in addition to a sturdy and attractive build at an affordable price”, Holub said.

Aside from the budget price, the Nokia X also offers the HERE offline maps, free music-streaming service NokiaMix, and the OneDrive cloud storage. 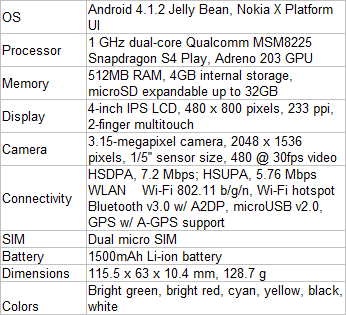 The Nokia X is now available for P5,990 in major stores all around GMA in the Philippines.