Octa-cores are clearly all the rage nowadays, and most brands are trying to get at least one octa-core smartphone under their name (Cherry Mobile, Starmobile, and MyPhone got theirs a few weeks ago). That said, DTC Mobile announced that this second quarter of 2014 , they'll be releasing their own strong Android, the DTC GT21 Extreme. 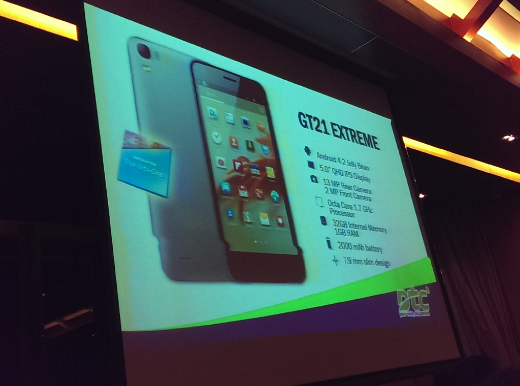 The DTC GT21 Extreme (which was unfortunately, shown to us only in a Powerpoint slide) boasts a big 5-inch qHD IPS display, 1GB of RAM, a surprising 32GB of internal storage, a 13-megapixel rear camera, and a 1.7GHz MediaTek True Octa-Core processor. Sadly, KitKat is nowhere to be found in this flagship.

Now, as amazing as it sounds, the huge compromise is the display, since an advanced device such as this should be providing consumers with at least a 720p display. On the upside, this device at 960 x 540 will likely be very speedy in most aspects since it will have lesser load on the hardware, pushing everything to the display like a bullet, provided it has a pretty decent GPU to boot and optimized software to operate on (2GB of RAM would've also been better). Aesthetics-wise, the Extreme looks inspired by Lenovo products, as it sports reminscent design from the company's current line of devices.

The GT21 Extreme has no announced price yet (just like the SKK Kraken), but DTC's Marketing Manager, Marta Buensalida, told us that their products won't exceed the P10,000 mark. Does that mean an octa-core at P9,999? Let's hope so.