Cherry Mobile is starting its year strong and right with recent outings of new affordable and up-to-date smartphones, such as the Cherry Mobile Me Vibe and the previous Infinix Pure and Infinix Pure XL. But as always, the Philippine company looks like it's far from done yet: They've just announced the powerful Cherry Mobile Cosmos One Plus. 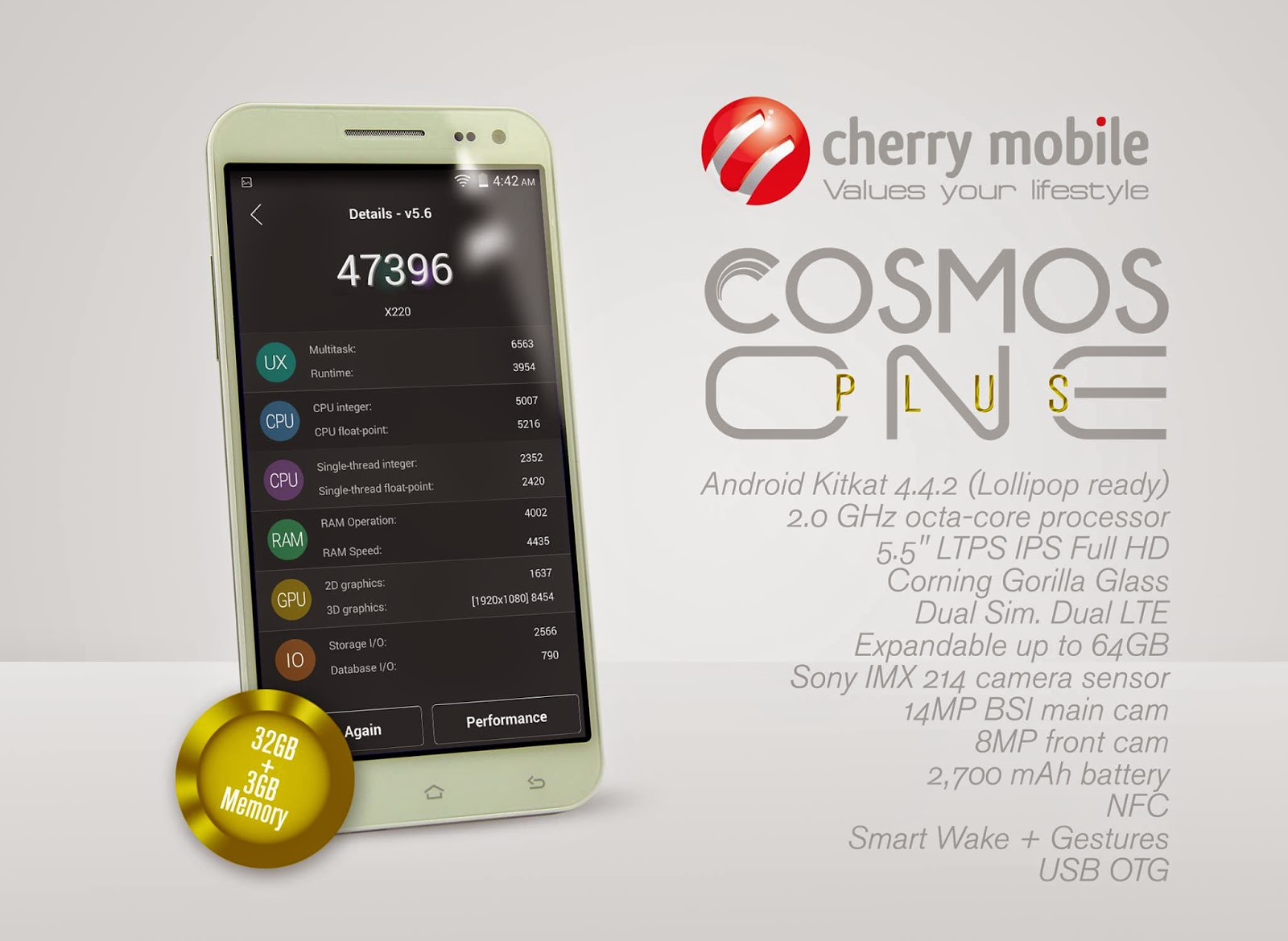 The Cherry Mobile Cosmos One Plus is an Android 4.4 KitKat device that sports the MT6595M chipset with an octa-core processor clocked in at 2GHz, a 5.5" LTPS FHD IPS display, a 3GB RAM, 32GB of internal storage to boot, a 14-megapixel Sony IMX214 camera, and dual LTE connectivity. Apparently, the device is also primed for Android Lollipop (which we shouldn't hope for anytime soon, just to set the expectations).

The Cosmos One Plus takes after the Starmobile Knight X, which shares most of its features, except for the former's 2700mAh battery (vs the Knight X's 3350mAh). Users can take advantage of the smartphone's dual LTE connectivity, which means you'll never get disconnected again. Another feature I appreciate is the microSD expandability of the device, which means it can really do a lot paired with the 32GB of onboard storage (giving the device a 96GB potential storage capacity, excluding USB OTG storage capacity). Design-wise, this device doesn't look anything special: It's just a plain white slab of raw power.

On a personal note, I hope that NFC technology would be more widely adopted, now that Cherry Mobile already has it on their flagship. If you're not familiar with NFC (Near Field Communications), simply put, it allows your device to "talk" to chips or other devices and perform automatic commands or wireless transactions.

If you do all your business in a smartphone, e.g. gaming, browsing, music, movies, etc., then the Cosmos One is a great choice to start the year. Based purely on the specs sheet, this device won't choke on you, and instead bring about a wonderful Android  experience for the cheap (relatively).

The Cherry Mobile Cosmos One Plus is now available at Cherry Mobile concept stores and kiosks nationwide for a price of P13,999 (SRP).