Heart Castle: A Mobile RPG Game Worth A Look

If chibi characters and cute monsters in forests and dungeons are your thing, then you should take a look at Playpark and Asiasoft's newest mobile game, Heart Castle.

Available for free iOS and Android, Heart Castle brings you to Wonderland, where you can play start your adventure as a Warrior or a Wizard, along with your party of up to three magical creatures, which you can gather on the way. 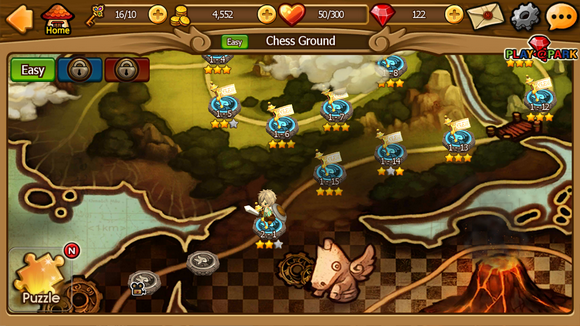 Story Mode: This is the main game feature of Heart Castle. You'll travel to different points on the map and finish missions, with the main aim of accomplishing three stars per area. The mechanics are very basic and straightforward: Just slash all the enemies, survive, beat the boss, and get items (unfortunately, this is the basic formula for the "always online free mobile RPG" genre).

Story Mode gets repetitive and tasking after a while, since most of the elements on the map and monster sprites look the same. Which could be the reason why the developers added an "Auto" control mode. If you're not familiar with this feature, it allows your party to move on its own without your control, basically autopilot. This way you get to progress in-game without really paying too much attention aside from going from point to point on the world map.

Dimension Hole: Available in three difficulty settings, this feature is essentially a time attack: You get a set amount of minutes to clear a map, then you'll move on to another part of the area via a "dimension hole", then repeat. You'll get rewards depending on how efficient you clear maps. 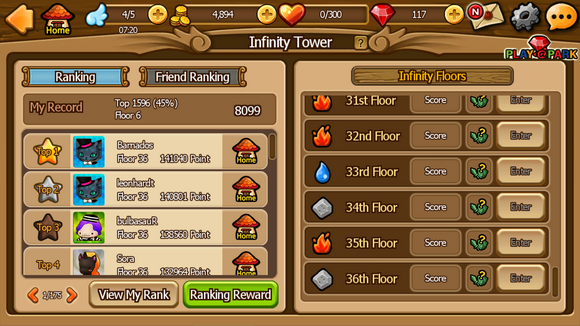 Infinity Tower: Have you played an MMORPG where there's a tower, and the main objective is to grind and reach the final floor? Well, that's basically Heart Castle's Infinity Tower for you. You take your party, beat all the bosses per floor, get rewards, be on the world ranking (yes, there's a world ranking for the best tower clear times), and repeat.

The Infinity Tower has 36 floors by the way.

Arena: As the name suggests, this pits players against other players, although the opponent is not real-time. Win rounds and you'll get points that will further your PVP career. Lose rounds, lose points and get your world rankings down.

All of these game modes require a certain amount of keys, e.g. each area on the Story Mode requires a key, in which you have 10 keys total. Clear 10 areas and you're done for the day, unless you get more from quests or from the in-game store. Or you can wait for it to cool down. 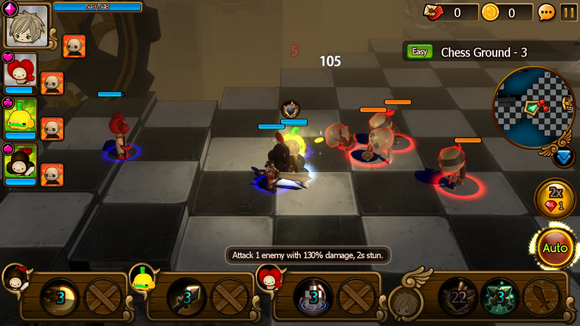 Gameplay-wise, Heart Castle is pretty easy to understand and has a very minimal learning curve. It also helps that there are plenty of quests that will fill your equipment roster, in-game coins, and gems pretty easily. You won't even need to purchase items from the in-game premium shop, since the difficulty of the game overall is pretty easy, at least for the initial stages (I haven't played the game long enough to see if it'll be a grindfest in the much later stages).

In place is an upgrade system for your character, your pets and creatures, and for your equipment. You can make your items and party members more powerful by combining these with other loot you gain from clearing areas. Upgrading is oftentimes a pain, since it involves a randomizer, making your upgrade either succeed or fail. Each upgrade attempt costs gold too. 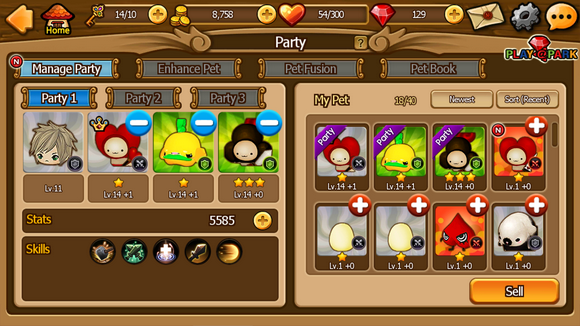 There's also a guild system, which at this point in time, I don't fully understand the advantages.

For what it's worth, the graphics and the musical scores in-game are pretty detailed and well-made, relative to other mobile games - Heart Castle is along right there at the top with other Gamevil games.

As a closer, get Heart Castle if you're into RPGs with parties, grinding, and everything "kawaii." This will definitely kill your time, and perhaps you can gain new friends along the way.