ASUS has definitely took a liking to covering all bases a customer can look for in a smartphone. When they released the first Zenfone 2, they were thoughtful enough to put enough raw performance in the device and sell it very affordably that the masses raved about it. Now, they've introduced multiple variants more, one of which is the ASUS Zenfone Selfie. 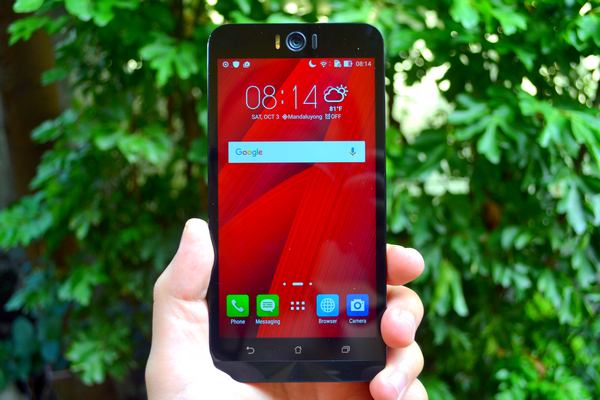 The ASUS Zenfone Selfie at first glance instantly reminds you of all the Zenfone releases. The design language haven't changed at all - you can still find the same camera positioning, the same volume rocker, and the same soft touch buttons at the face of the device. However, if you look closely (or if you also own a Zenfone 2), you'll find that the Selfie is slightly bigger than the original - and rightlly so, to make room for the front-facing camera components. 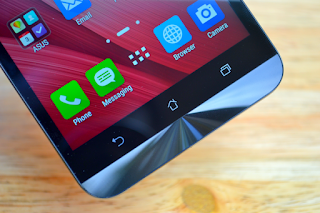 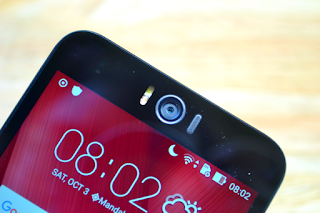 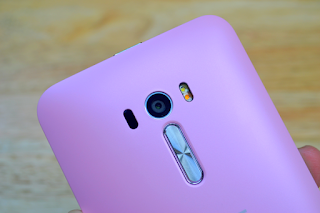 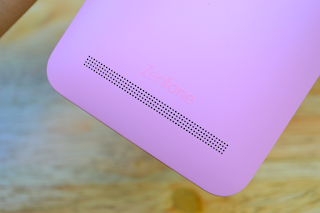 Another change you'll notice is the rear shell texture and coloration. The initial Zenfone 2 featured a brushed metal neon plastic rear, while the Zenfone 2 Laser sported a matte-type neon-colored plastic rear. The Zenfone Selfie on the other hand boasts a clear, pastel-type coloration (my unit came in pink). Additionally, if you'll look closely, the Zenfone 2 Laser and Zenfone Selfie's rear camera flashes and Laser AFs are in different positions. These are very minor details but is something that's nice to know in identifying all Zenfone 2 units. Handling-wise, the Zenfone Selfie handles like all of the Zenfones before it: It fits nicely in the hands, not too slippery and grippy, though it was never in mind to design it slim. The weight too is comfortable. What I'll suggest though is that you install a matte-type screenguard on it - not to protect the display from scratches, but to kill off the smudges brought about by your fingerprints. 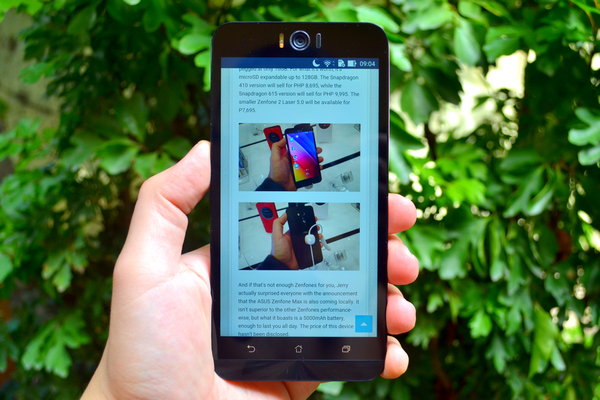 Just to get it out of the way, the Gorilla Glass 4 is so tough that during the ASUS Zenfone Selfie demo, an ASUS representative - together with some special audience participation - tried their best to put a scratch on the Selfie's bare glass display using shaving blades, pocket knives, and forks. Fortunately, no scratches were had (it would've sucked bigtime if the live demo backfired on ASUS). It's impressive nonetheless, and here I digress.

The Zenfone Selfie's high definition display is something to brag about. The finer things in life - if you may - are very noticeable. The colors are warm and well-saturated - which makes the screen well-rounded, if not only for the yellowish whites its display gives off. This is especially prevalent when you're browsing pages with white backgrounds, or just using productivity apps on a 5.5-inch display. Yet, the device offers a software-enhanced Bluelight Filter - which I feel is of little use since all it does is mask the colors with a yellow filter, but with the colors yellowish to begin with. This said, it does not in any way diminish the device's display detail. 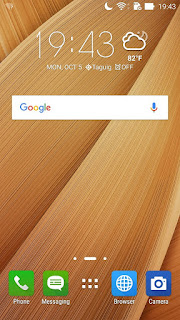 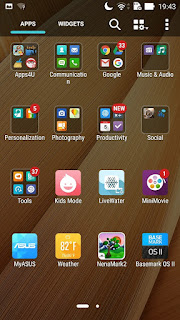 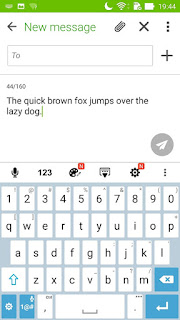 The ASUS Zenfone Selfie utilizes the same ZenUI across all Zen devices, but operates on Android Lollipop. It's nice to know that ASUS has "owned" their own UI, and are consistently striving to make it better by providing almost bi-weekly PlayStore updates. You can even change your themes and icon packs via the official ASUS theme store.

One thing ASUS can improve on on future Zenfone iterations is the integration of the navigation buttons to the display itself, i.e. the company should ditch the non-LED backlit haptic buttons - it's the general direction of Lollipop anyway. As great as the Zenfone line is, this is one chink in its armor.

The ASUS Zenfone Selfie utilizes Qualcomm's MSM8939 Snapdragon 615 chipset, paired with an Adreno 405 GPU and 3GB of RAM. This is a departure from the premise of the initial Zenfones that utilized Intel hardware, now opting instead to use perhaps the relatively powerful Qualcomm offerings while still maintaining the low tab price. While we generally had no complaints over the Intel hardware, we're going to trust ASUS with the new direction.

As usual, we installed benchmarks on the Zenfone Selfie, and here's what we got.

The ASUS Zenfone Selfie scores fairly moderate on all the benchmarks we ran it on. It shows that it's a true mid-ranger capable with duking it out with 2014's top flagships relative to its price point.

Benchmark performances aside, the Zenfone Selfie suffers from the same issues that plagued the Zenfone 2 and the Zenfone 2 Laser - bloatware. Connecting the device to the internet will wake the device's pre-installed Dr. Safety app and other security features, among others, filling your notification shade with unneccessary alerts. Normally, tech-savvy users would just disable these apps from the Settings page, but the device's target market - those who like to snap photos everywhere - may not be as well-equipped with technical knowhow. Though we understand where ASUS is coming from (they want to offer free security), ideally there should be an easy killswitch for such apps, simply for user convenience. And yes, I'm also looking at you Samsung.

With the hardware set of the Zenfone Selfie, there's no doubt that it will reproduce high quality videos as is. We played a high definition video on the device, and the results are superb. Just look at the chameleon and the leaves blending in the green background. In the same vein, the blues and the whites in the iceberg appear detailed and spectacular. 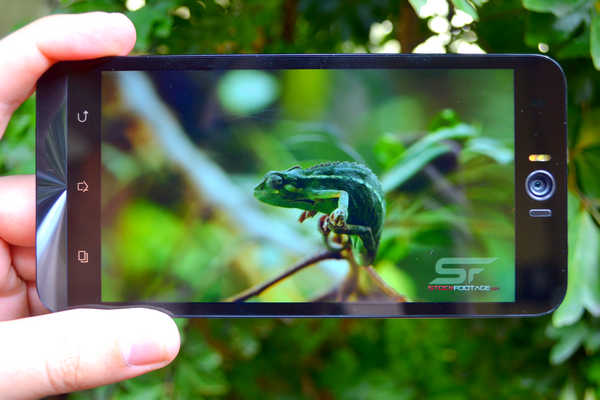 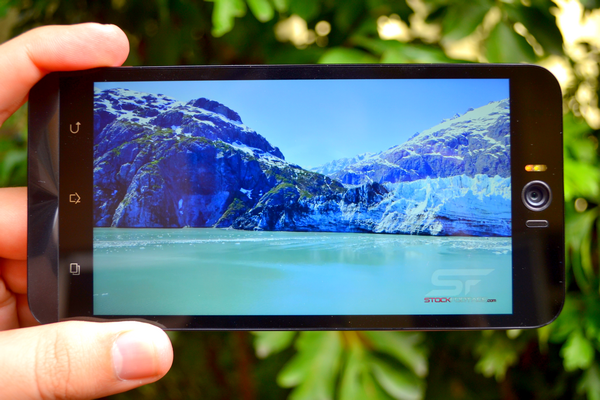 Playback-wise, loading videos and skipping scenes in the 1080p video being rendered doesn't bother the device at all. This should be expected anyway as the Zenfone Selfie operates on up-to-date hardware.

In terms of audio, the Zenfone Selfie's external speaker plays powerfully. It does sound good as it plays powerfully, but relative to its tier, it can use some more work as it lacks depth - something most smartphones until now are missing. What's good about it though is it even plays louder and fuller than the original Zenfone 2.

Call clarity and voice reproduction with the ASUS Zenfone Selfie is good; you cann hear the voice of the person you're talking with well.

Armed with 3GB of RAM and a Snapdragon 615 octa-core processor, even graphics-intensive games should be of no challenge to the ASUS Zenfone Selfie - and it seems that way. We ran a battery of demanding games, such as N.O.V.A. 3, Modern Combat 5: Blackout, Edge of Tomorrow, Order and Chaos 2: Redemption, and even Vainglory, but we all got the same, consistent performance. We haven't observed any choking or stuttering, save for the casual internet disconnection. If the Selfie can talk, perhaps it would be saying "Bring it!" to us over and over again. 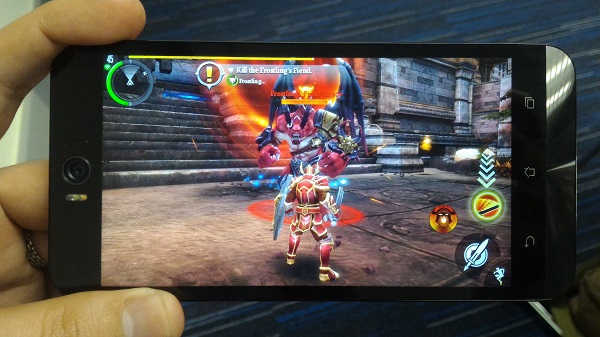 We don't even need to mention any other game other than the above, since these are among the highest tier items in the PlayStore.

The device warms up comfortably after around 10 minutes of play, but this is applicable only to the graphics-intensive class, as it requires more computing power than others.

The highlight of the ASUS Zenfone Selfie are of course, its cameras. The device features two 13-megapixel cameras - one in the rear, and the other one in the front, the latter of which comes complete with its own dual-tone and LED flash, while the former sporting the Laser Autofocus equipment. Additionally, the front-facing camera is equipped with a wide-angle lens, so that selfies and group selfies are easier to capture. 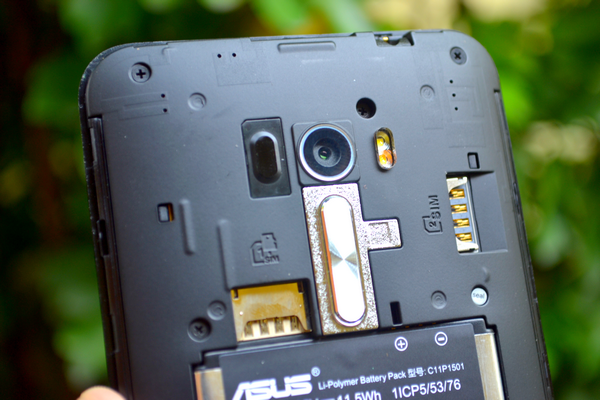 Relative to camera performance in the Zenfone 2 line, the ASUS Zenfone Selfie's results do seem to suggest that it captures the better images, dare I say mildly better than the original Zenfone 2 - which in addition is perfectly exhibited in low-light situations.

Further elaborating on the second paragraph of this section (low-light situations), while we mentioned that the Selfie seemed to produce the better images in the Zenfone line, the output - while always warmer and more color accurate - seem pasty and soft. This could be due to the PixelMaster software running, trying to smoothen what it detects as blemishes, the same way the device "beautifies" your selfies. Bottomline here is the Zenfone Selfie is among the devices which has the best camera to date, and casual to intermediate users will find it satisying to use. 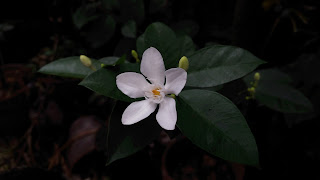 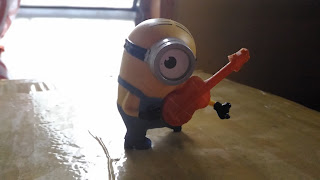 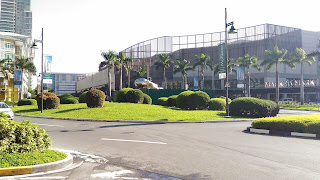 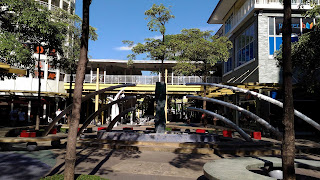 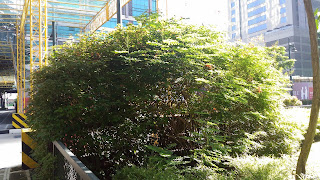 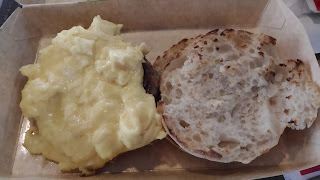 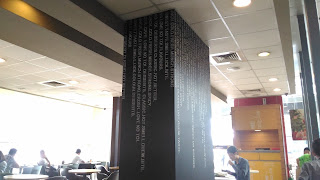 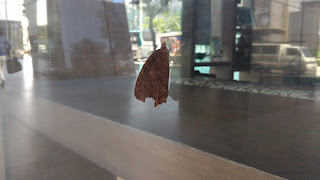 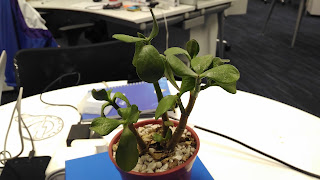 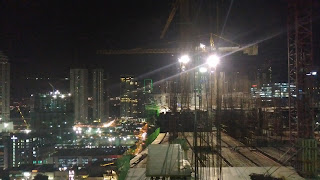 Similar to devices running the ZenUI, the Zenfone Selfie offers multiple camera modes and fiilters, such as, among others, the aptly called PanoSphere (capturing a 360-degree photo. Imagine panorama stitching, but 360-degrees), being able to make a GIF on the spot, Slow Motion capture, Time Rewind, and Time Lapse. There's also other options, such as a Super Resolution, and the much coveted Manual mode. 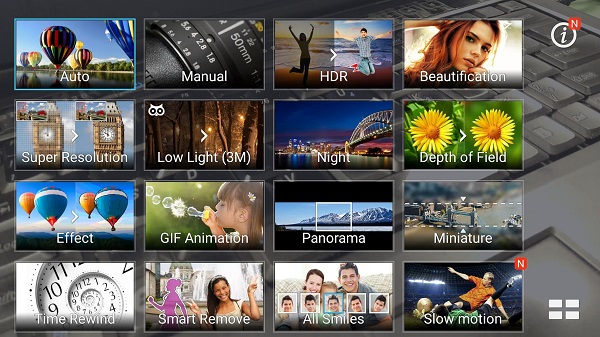 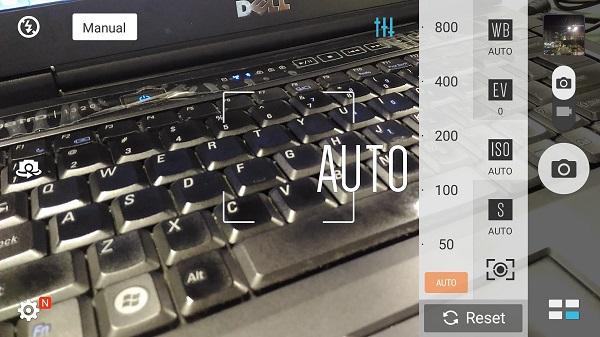 The Manual feature of the Zenfone Selfie enables users to manually adjust ISO, EV, white balance, and shutter speed values. It's a great feature to utilize especially if you have a stabilizer.

Just to put it out there, both the rear and front dual-tone LED flashes of the Zenfone Selfie are bright. 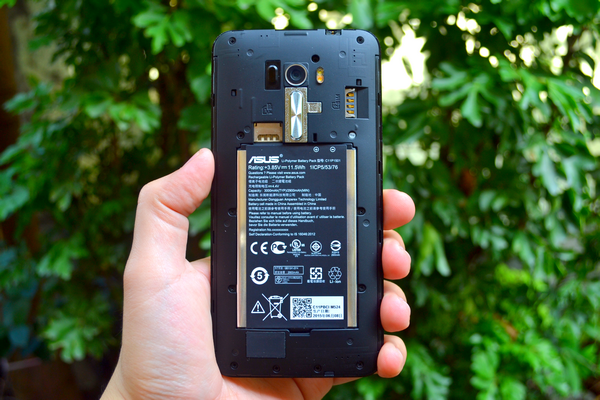 The ASUS Zenfone Selfie is equipped with a 3000mAh non-removable Li-Po battery. Pair that battery rating with a battery-optimized OS (which in this case is Lollipop) together with a low-power consuming chipset and you have something that would last you around 9 hours, benchmark-wise. Realistically, this device would last you around 7 hours with moderate usage - data usage, medium brightness, casual app browsing and short bouts of gaming, and both SIM slots active.

The Zenfone Selfie, on top of its already feature-rich self, also features NFC and MHL. If you're not familiar with these, NFC allows the device to communicate wirelessly with other devices or tags that offer the same, and do things such as pass contact details simply by touching your devices together. 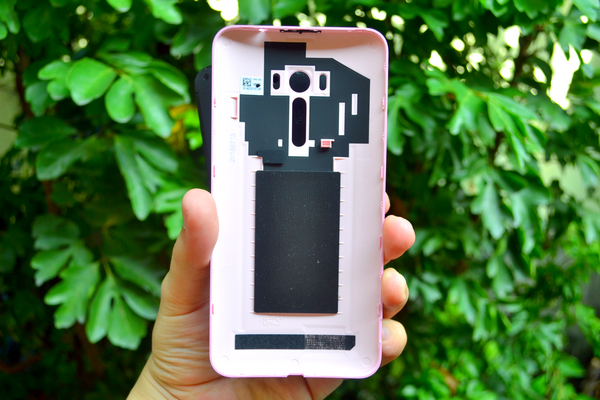 MHL on the other hand is a wired output standard that enables your microUSB to directly communicate with an HDMI-capable device via an MHL adaptor. It's a cool feature, especially if you don't have a way or device to wirelessly communicate with your TV.

Another thing worth mentioning is the device's smart touch and motion gesture feature, the ZenMotion. Basically what it does is open apps for you by simply swiping characters on the screen, even if the device is sleeping. It's an old tirick dating back to Jelly Bean, but it's useful nonetheless, especially if you learn to master using it.

The ASUS Zenfone Selfie is - if you may - a selfie-lover's dream made into reality. It's basically everything the Zenfone 2 is, but with a front-facing camera in steroids. It's also a well-rounded device: the device performs well in all aspects - gaming, productivity, you name it - while allowing you to capture your moments in time in great detail, thanks to that sizeable battery rating and that chipset and RAM combo. 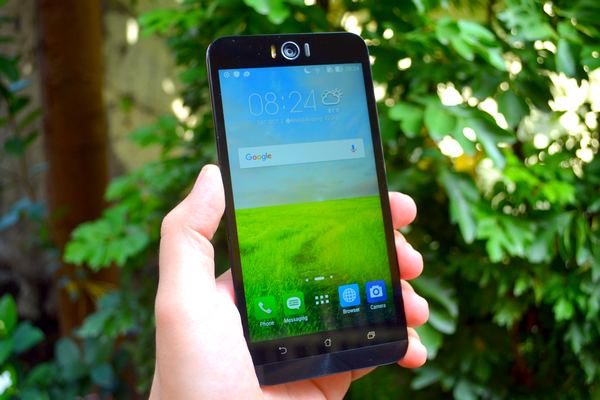 While we feel some improvements can do the Zenfone Selfie (and other Zenfone variants) good, such as the integration of the soft-touch buttons to the display itself, these should not be major dealbreakers that will discourage you from getting the device.