The $4 Android smartphone maker Ringing Bells is asking the Indian government to shell out $740 million for the distribution of their Freedom 251 smartphone days before the actual launch. This comes after making waves globally that a four dollar smartphone is actually possible. 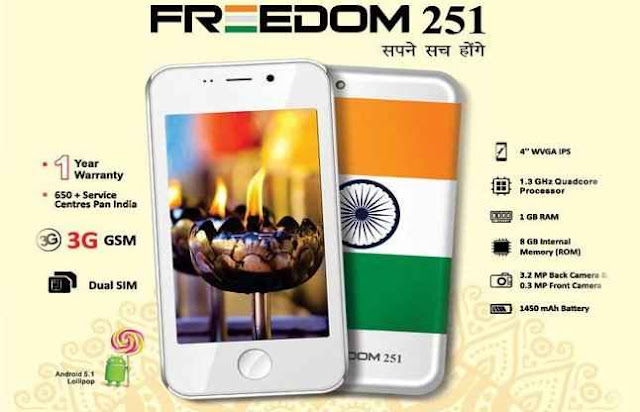 The Freedom 251 at cost will be around $17 (that's already a $13 loss right there), but its CEO Mohit Goel is looking forward to minimizing the cost by recouping losses via ads, and by creating an appstore called WhiteCloud, which would then sell apps at around $0.01 to $0.03 each, cutting down the losses to $4 per unit. 5,000 units will be initially distributed to customers, with a total pending order of 70,000,000 units.

Some argue that hidden beneath the marketing veil of being a $4 Android smartphone is some form of scam, that the subsidies that will be paid by the Indian government - that is, if they're willing to pay up - will still come from the taxes paid by people, and that either way, Ringing Bells will still be getting profits.

The Freedom 251 on the other hand is an actually decent device, which features a 1.3GHz quad-core processor, 1GB of RAM and 8GB of onboard storage. On top of that, there's also an 8-megapixel camera in store (3.2-megapixel at the front), plus a 1800mAh battery. It even offers support for 3G connectivity and microSD cards up to 32GB.

The question now is will we see the Freedom 251 materialize to its potential, or will it become obsoleteware after a few thousand units produced together with lots of pointing fingers?