If you've been at your local mall recently, chances are you've seen an OPPO booth, poster, the OPPO mascot Ollie, or a combination of all three. This is the Chinese brand's way of projecting awareness to Philippine customers - and this just means that their budget - and perhaps their phone sales even - is that huge, thanks in part perhaps to the runaway success OPPO F1s. And with that success is where the company intros the OPPO A39, a mid-ranger Android smartphone which pretty much looks like the company's watered-down flagship. It's beautifully engineered, and with a pretty slick UI to boot. Scroll down for the review.

Just to get it out of the way, the OPPO A39 is far from unique design-wise, but it does look very, very sexy, in an iPhone-ish kind of way - and that's good. It just means that the engineering is that refined. There's also that weight that gives the device legitimacy on your hands; it feels very premium and fancy, even if everything's made of plastic (yep, it just looks metal). 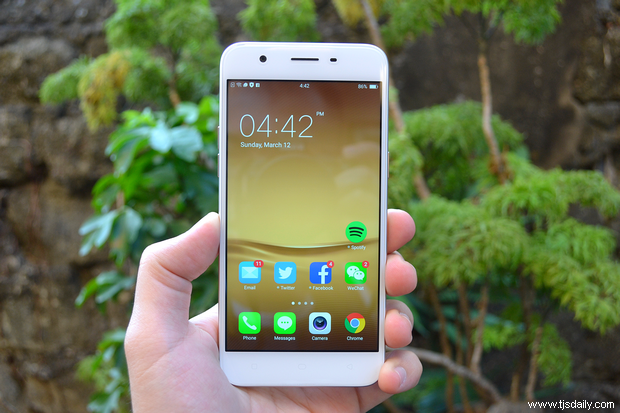 The front of the device carries a 5.2-inch display, complete with your soft-touch buttons, with a 2.5D curved glass implementation. There's also a front-facing camera just beside your earpiece and proximity sensor. Nothing else to find here (no fingerprint sensor like the OPPO F1s), except that I really do have a thing with soft-touch buttons that do not have backlight LED; it's quite challenging to navigate especially in nighttime environments, and you need to have a certain finger memory to be able to use these efficiently. 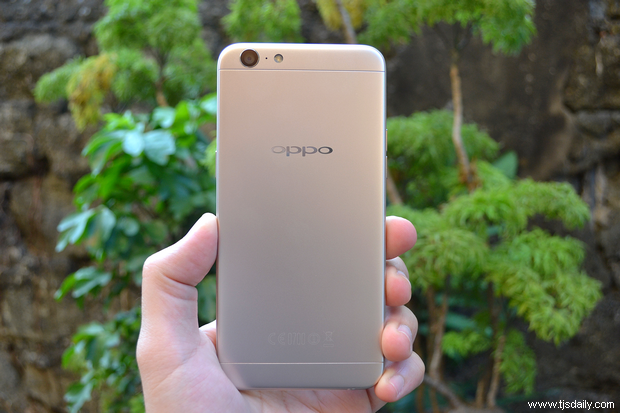 The rear of the device meanwhile features your main OPPO fare, such as the 16MP main camera with its mic and flash immediately at the left, followed by the OPPO logo at the center. We appreciate how fine the faux-aluminum rear feels to the touch, and that's why we kept it covered with the included silicone case instead, just so it won't get microscratches - or even worse, dings from ordinary use.

Regarding the sides: The volume rockers are on the left side; the SIM and microSD card slots, and the power button are on the right; the external speakers, the mic, and the microUSB and the headphone ports are all located at the bottom of the device. The top is totally bare of anything. To be honest, we would've preferred that the headphone port be at the top of the device, since we like to pocket our devices while listening to music. 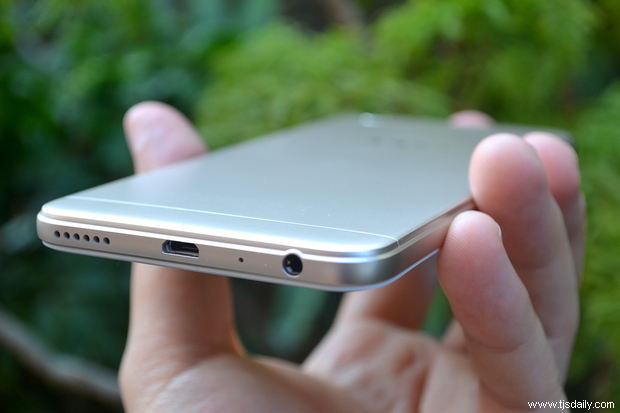 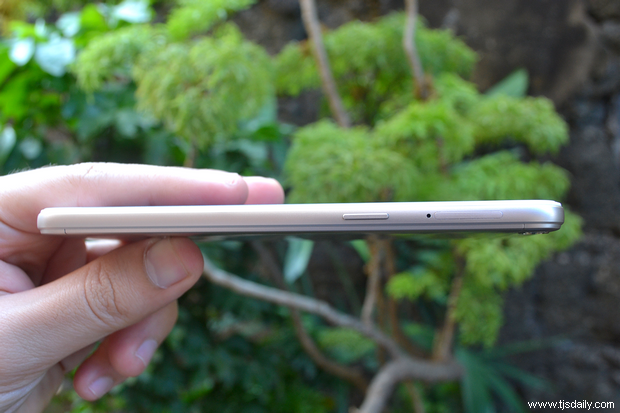 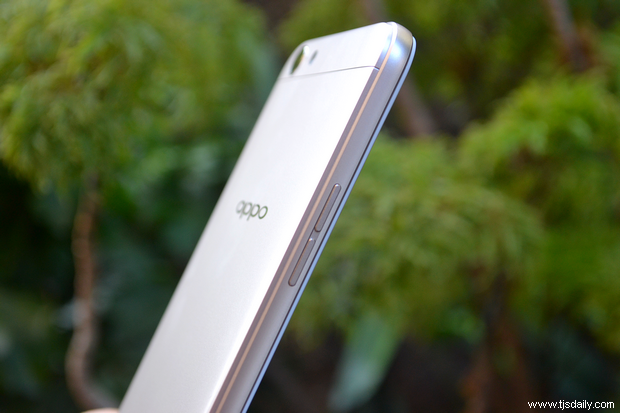 The SIM card slot is composed of two nano SIM slots, with one dedicated slot for a microSD card.

The device's 720p display isn't too shabby resolution-wise, since the display since is optimal for the pixels. Also do remember that we're talking about a mid-range device here; anything more than this will probably hit the P25,000 mark. 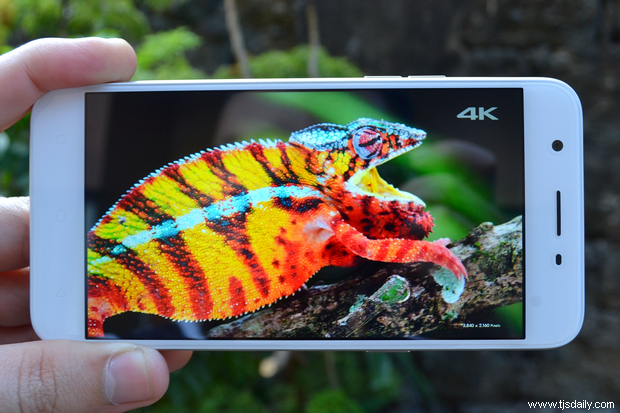 Colors on the display are reproduced nicely, as reds, greens, and blue look accurately saturated. Videos look swell as well, especially 720p videos on YouTube. Whites on the other hand are on the hue borderline between bluish white and yellowish white, meaning it's pretty spot on.

UI-wise, the OPPO A39 sports the ColorOS 3.0 (under a somewhat outdated but still competitive Android 5.1 Lollipop), which seems heavily-inspired by Apple's iOS. Even then, it's pretty snappy. And as with most custom-themed Chinese OSes, this one also has no app drawer, and app rearrangement is a pain in the butt (you won't be able to arrange apps alphabetically, unless you manually move every single one of 'em). 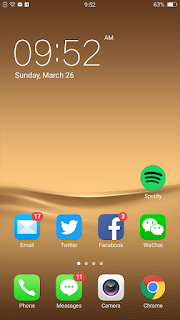 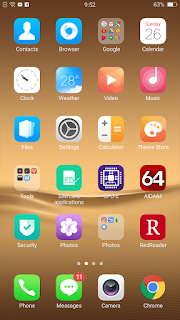 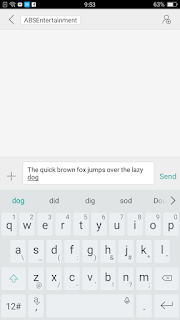 Another thing of interest here - and I really want to emphasize this - is that the OPPO A39 (as well as other OPPO devices) do not come with any pre-installed bloatware. Now this is importany, as bloatwares tend to hog precious RAM and storage space.

Sporting an aging 1.5GHz octa-core MediaTek MT6750 SoC, a Mali-T860 MP2 GPU, and 3GB of RAM, the OPPO A39 does perform well almost all of the time, sufficient for use as a daily driver.

We ran the usual AnTuTU benchmark on the device, and what we got was as expected of the SoC: 39494. Nowadays this number is generated only on the lower echelons of the smartphone kingdom, but to be fair this only focuses on the latest hardware a phone can have, not entirely on the experience a device can provide.

Other benchmark scores are as follows:

Speaking of experience, the OPPO A39 does provide a smooth experience as mentioned in the first paragraph of this section, and can handle all your demands, even gaming. There are but a few chokes to experience - like when clearing up the background apps, the device sometimes pauses for a few seconds before loading the app tray again - but overall can be considered just a very minor misgiving.

Located at the bottom of the device, the OPPO A39's external speaker sounds okay for its category. It's loud enough to stand out in a mildly noisy environment, but has no power and has a somewhat thin sound vibrancy. What's good is its power will be sufficient to accompany, say, a movie you might watch on it. 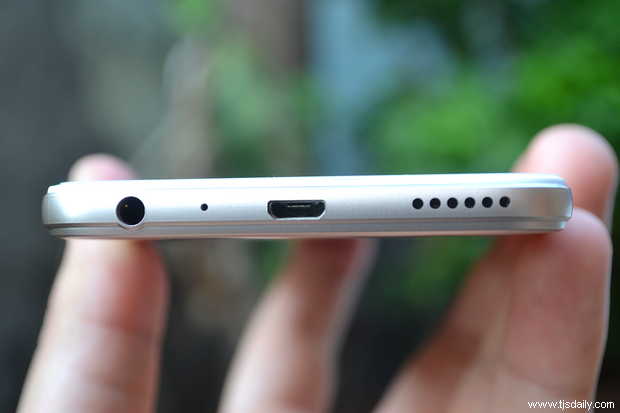 Another thing is that this design language (the placement of the speaker at the bottom of the  device) means that most of the sound you're supposed to hear will be blocked off by your palm when holding the device in landscape mode. This is especially true when you're playing a game.

The earpiece meanwhile produces loud and crisp calls; you'd be able to understand the person you're talking to clearly, provided you have good reception, which the OPPO A39 also wonderfully provides.

We mentioned that the OPPO A39 can handle gaming relatively well, and it does, as it can run Mobile Legends: Bang Bang and Titan.MU smoothly - two games that have lots of sprites and in-app actions ongoing. Finger movements and taps register on the games correctly, too. 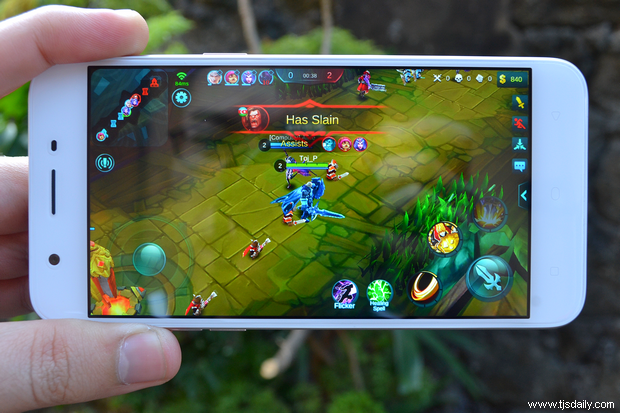 However, gaming with bigger, more graphics-intensive games such as NBA 2K17, make the device bog down to an irritating crawl. To be fair though, not all devices, even higher mid-rangers, can handle this game. So if you aren't a basketball junkie, you should be fine.

Built in the DNA of OPPO devices are its good to great cameras, so you should expect it to perform in this department, which it does. 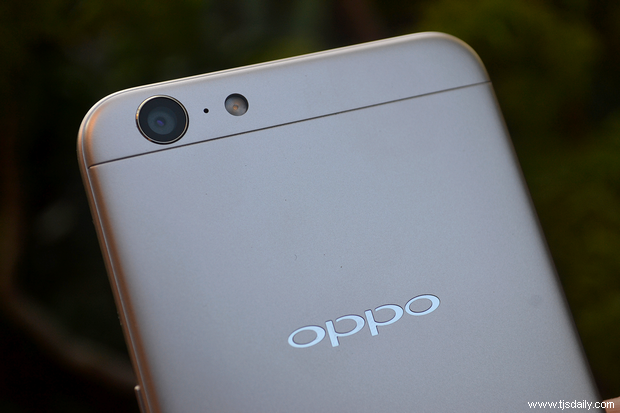 The OPPO A39 carries a 13MP rear camera with autofocus and LED flash as its main shooter, and a 5MP front-facing camera. Now, while this sounds basic on paper, its does capture detailed and near-identical saturated images, but some are reproduced brighter than they are in real life. It might be OPPO's imaging algorithm at work, but it has a point being so since the device is targeted for the selfie-conscious and filter-aware social media crowd

The same is true for the 5MP froont-facing camera. This smartphone will make you look beautiful - we kid you not. You can adjust your face's smoothness levels to a point of 7 (your face will look very soft image-wise), and even have your skin from "fair" to "rosy". The Chinese company isn't kidding when they say that they're the #SelfieExpert. 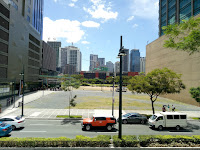 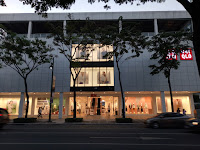 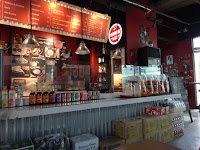 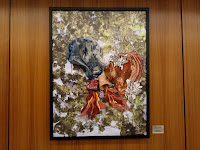 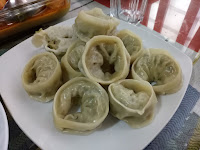 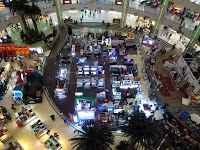 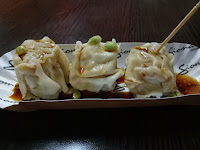 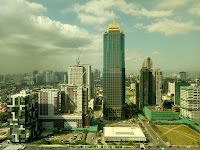 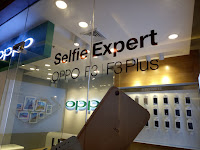 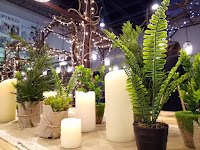 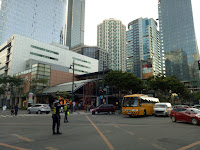 Another point of interest here is that the camera app, while having a ton of features and tweaks, is also one of the simplest and easiest to use. The UI is clean and straightforward, not intimidating even, unlike others that has its options hidden under other tabs. For example, the OPPO A39's Panorama, HDR, Time Lapse, and Timer modes are all exposed at the main camera screen, not hidden anywhere. More advanced options such as the Ultra HD, GIF, Double Exposure, and Expert Mode are conveniently tucked away in a button in the main camera screen. 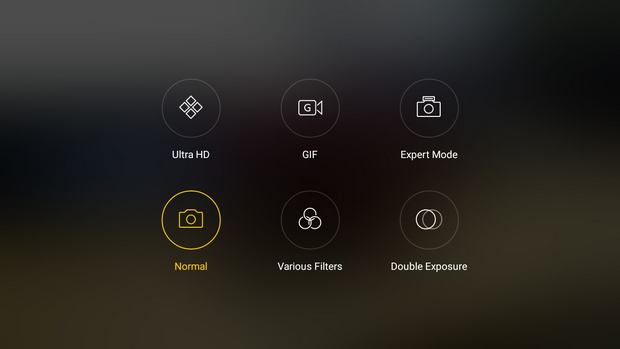 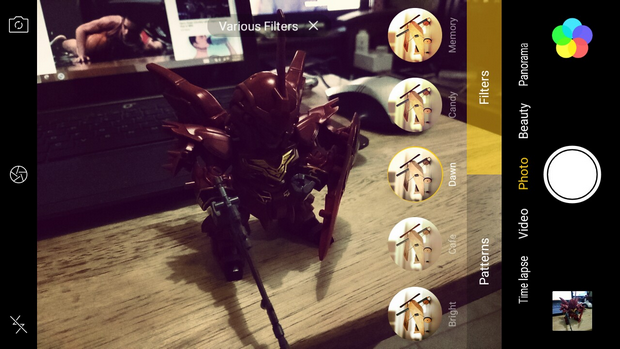 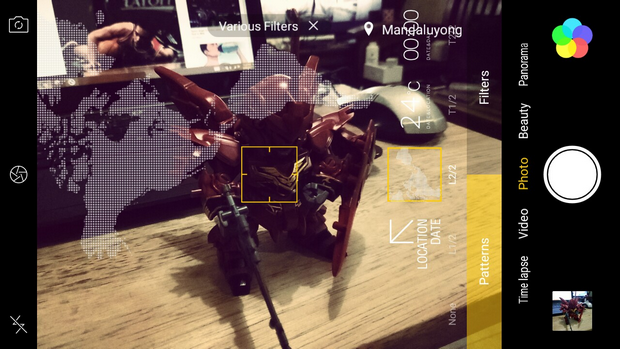 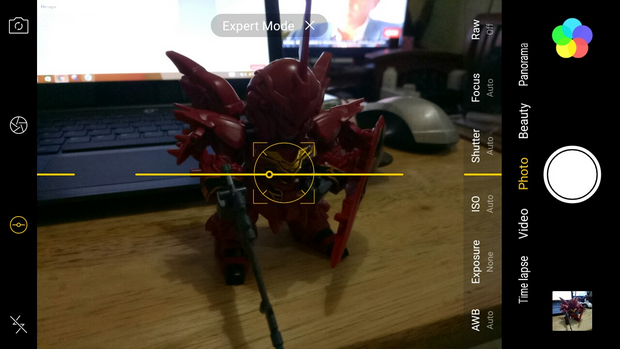 Speaking of Expert Mode, the OPPO A39's camera allows you to manually select ISO, Exposure, and Shutter settings. It also lets you capture RAW images. How neat is that? And while we're sure that all these features and more are available with OPPO's more expensive offerings, it's surprising to find it all here in this mid-ranger.

Only thing we found minor on the camera is the app drawer-to-camera load time. Then again, with its hardware, this is acceptable.

The OPPO A39 is equipped with a 2900mAh non-removable battery. Now, when it comes to battery life, we experienced anywhere between 6 to 7 hours of uptime, mainly composed of data on, dual SIMs enabled, and heavy online gaming involved (yes, we like to leave our phones running with all the mobile MMORPGs out there).

While we find the uptime acceptable, it's the charging time from 0 to 100 that kills us with the OPPO A39. It takes a slow 3-hour crawl with no usage for the device to be fully charged, unlike its bigger brothers with VOOC fast charging.

We aren't sure why the OPPO A39 exists, since the much better OPPO F1s is available just around the corner if you save a few thousand pesos more. But as it stands, the OPPO A39 is can stand on its own performance-wise - camera, gaming, regular browsing, you name it - especially if you're strictly sticking to a budget. 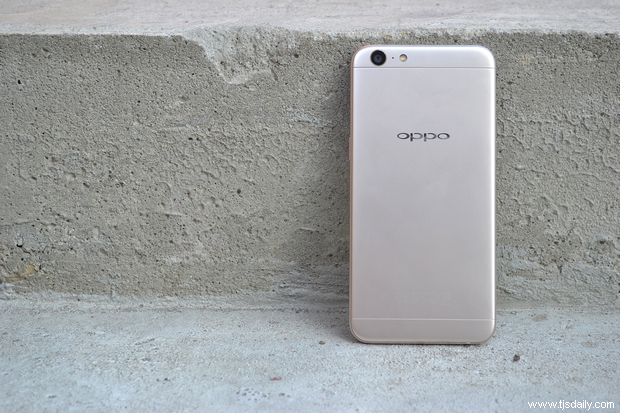 The OPPO A39 is available for P9,990 (it got a recent price cut from its original P10,990 SRP), at OPPO concept stores and kiosks nationwide.