Home » games » First Glimpse Of Ragnarok at the DS.

First Glimpse Of Ragnarok at the DS.

What comes to mind when you hear Gravity and Lee Myung Jin? Ragnarok of course. This very popular MMORPG did its time in the online industry. We gotta admit that it's fame is slowly fading away. But then, what would you do if an MMORPG with a caliber like Ragnarok moves to a handheld console? Of course you buy it and play it. Duh. This is the Nintendo DS invasion of Ragnarok. 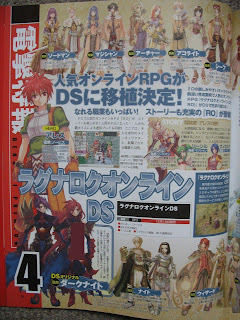 Apparently, there are already game leaks in the internet even before the original DS cartridge release date. It's just December 15 now but the release is supposed to be on December 18, and that's only for Japan. That's how I managed to play it as early as I did. But I ain't tellin` nothin.` Piracy is baaad.

Okay, so on to the game itself. Forget about the title screen and all that stuff. When you start a new file, you'll be asked of your name and your stat distributions. Forget about the stat distributions in Ragnarok Online. This thing right here is different. You have 48 points all in all, distributable to 6 stats. Strength, Vitality, Dexterity, Agility, Intelligence, and Luck. Sounds good right? Wait 'till you get to the storyline. BTW, you can't control nothing using the d-pad and the ABXY buttons. The only weapon of choice available is the stylus and the touch screen. 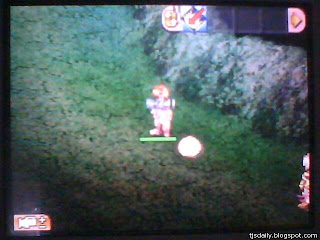 Me and a Poring at the beginning stages.
Three characters would greet you in the screen. A knight, a professor and a gypsy I think. Obviously I forgot my Ragnarok ABC's already. So there. What we have next is a record breaking 10 to 12 minutes of story intro. Yes, story intro! After that, I felt like playing no more. Only after that would you be able to control your Novice character (right there up top). Below is what the top screen of the DS would display. 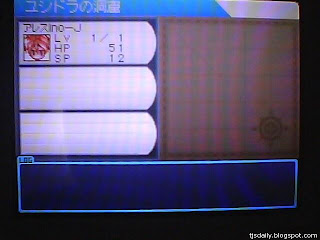 Anyway, you'll be able to party with two more characters. You'd get a Gypsy girl initially. I don't know what would happen next. I guess particularly because it's written in Japanese. Hell, I barely understand myself. Google Translator anyone (is there even such a thing?)?

Eventually after 20 or more minutes of playing, I got suddenly bored. I didn't expect this to happen because primarily, this was one of my favorite games a few years back. It's not boring (maybe it is). I just don't understand Japanese.

Graphics, well, judge for yourself. Nah, I'll do the judging for you. Graphics are fantastic. The journey from the PC to the DS is a huge success. You'd really feel that you're online while playing this game (less the real persons playing player characters). I mean, what you see in the PC is what you see in the DS. The music would also bring to you nostalgia. If you ever missed that Prontera tune, now you can listen to it all day. The thing is, you can't travel the city of Prontera by foot. You have a Kafra NPC that would ask you where you wanna go in the city. But once you select a place, you could control yourself again. 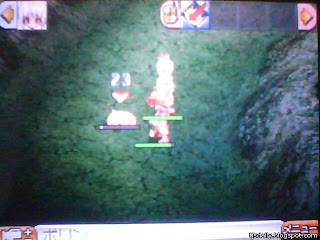 Kill that Poring!
Some things I noticed. I don't know (currently) if monsters drop items in here. I killed like 20 Porings and found not a drop of Jellopy. Can't find any Fabre and/or Chonchon either.

If you find my review incomplete, play the game yourself. If you're itching to play the game right now, google the leaks. I won't tell. Piracy is baaad. Anyways, the official release is just three days away. This is a "must-buy" game anyway. Relive the adventure. Relive being at level 99.

Thanks to Rayster for giving me the heads-up way back from October. 'Till my next installment.