National Capital Region, Philippines - The worst flood since ever hits Metro Manila today, September 26, 2009. The typhoon that caused the deluge is locally known as Ondoy (Ketsana). It's the worst since 1967. Our local weather watchdog Pagasa attributes this epic flood to climate change.
The Metro as far as I can remember never experienced anything at this scale. This is the first time I saw my local streets flooded stomach-deep. As reporters say it, it's something of epic proportions. The inside of our house is a complete wreck. It's like it's totaled. You know them bombed houses in Afghanistan? Just put some 3 1/2 feet of floodwater in it, that's how our house looks, complete with the floating stuff and all.

Cars parked here and there were flooded bad. Our family car, I wonder if it'd still work after this typhoon settles. One desperate Elf truck tried to cross our street in hopes of higher ground but to no avail. It stopped dead-center of the road. Passengers were safe. 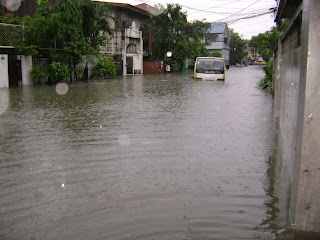 We still consider ourselves lucky here in Mandaluyong though. Marikina, Quezon, and some places at Rizal are the hardest hit of this freak typhoon. A local actress, Kristine Reyes, has to stay on her roof because her house is totally consumed by the flood. She was later rescued. On TV, news channels have shown a family of five being dragged by the Marikina River along with their house. If those guys have survived the raging river, they would've probably ended up at Manila Bay. I hope they remain safe. Anyway, nine people are already dead because of Ondoy. God bless those souls.

And you know what's scaring me inside? My girlfriend who lives in Marikina haven't rung me up all day. I've tried contacting her every now and then but all the phone lines are dead (as of this writing she has texted me already. Thank our good Lord). I think the rain's so dense not even cellphone signals can pass through. Airtravel has been suspended, watertravel has been suspended, heck even the Philippine President was forced to use a public railway system because her convoy can't pass through flood-filled roads.

Bloggers all around NCR have been blogging nonstop with regards to typhoon Ondoy. They have been capturing images shot after shot to show their story. Videos are already on YouTube too. It just proves how badly everyone was caught offguard. 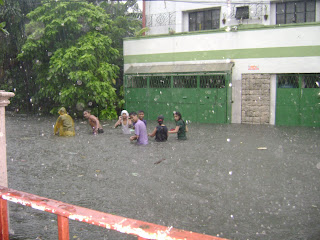 Folks caught in the middle of the storm
The National Disaster Coordinating Council (NDCC) has been a no go the whole day. Maybe they did execute some operations, but it might've eased only so many. The police, military and the LGUs are doing all they can to help. Here's hoping they would succeed.

Judging from our typhoon history, I predict this storm will go to some other Asian nation (probably Taiwan) and wreak havoc there twice or thrice the scale of what it did here. I wish that's not the case.

Like Pagasa, I also blame them freakstorms and freak heatwaves on climate change. If everybody would just take the time to listen to Al Gore, Global Warming advocates and the United Nations, they could realize that there's still time left to turn the tide. I was thinking a few hours ago what would be in it for us after 10 years? I'm currently 21 yet I'm experiencing some of the worst days of my life nature-wise. I guess if we throw in a couple of years more of abuse to Earth, these house-deep floods would become something we'll look back to and say "those were the good old days" because on 2029 average floods would be 30 feet deep. Or it could as early as December 21, 2012 - not.

I hope this would soon be over. 'Till my next installment.

Note: I'm calling the attention of Mayor Benhur Abalos of Mandaluyong City. If he or anyone close to him happens to read this, I want him to know that I'm demanding him to redo all the drainage declogging operations his people did last month. It's absolutely not helping at all. Better yet, he should improve our drainage system and not those irritating center islands at Boni Avenue all the time. Those are just eye candies. People's safety and convenience should be top priority. Use taxpayers' money wisely.