I watched the NBA Finals final game 7 this morning and found only this time to congratulate the Los Angeles Lakers for winning their second championship in two years, better known as back-to-back championships. Congratulations to Phil Jackson for his 5th Lakers title. 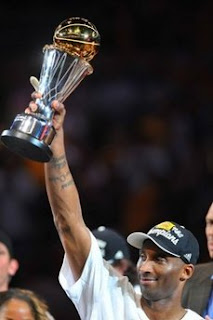 I just love how Pau Gasol, Ron Artest and Kobe Bryant played the final minutes. Especially the free throw moment of Vujacic, which cemented their lead further in the last two. You know them Celtics, they won't say die. I admit Rajon Rondo and Rasheed Wallace scared me a bit in the 4th quarter. If Rondo's second three-point attempt got through, well, it's just scary.

On another note, it's amazing how news people manage to create lightning-fast "Lakers Win NBA 2010 Title" news articles. I mean, as soon as the game was over, articles seven to eight paragraphs long were already done and circulated around the net, complete with game highlights, stats, and scores. I wonder how they do that? Those guys are way out of my league. They're like, 100 notches above me with regards to article production.