If you're familiar with with SNK's King of Fighter series, you would know who Terry Bogart or who Mai (the sexy hot lady with big "weapons") is. Well, they're back. This time though they're in Neo Geo Heroes Ultimate Shooting. If there's a game, there's cheats for it too. So scroll down below: 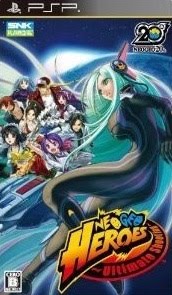 Credits and thanks go to Baldassano for making the cheats.