With this game being a new release and all, Lord of Arcana's developer Square Enix made an immediate follow-up for this game - a must in every new arrival vying for the top spot.

Anyway, the Lord of Arcana Quest Pack Volume 1 was released by Square Enix in the PSN on October 14, 2010, just 3 days ago. Picture below: 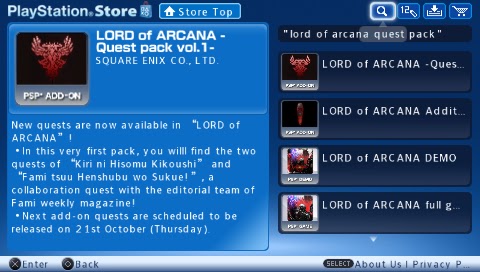 
New quests are now available in "LORD of ARCANA"!
• In this very first pack, you will find the two quests of "Kiri ni Hisomu Kikoushi" and "Fami tsuu Henshubu wo Sukue!", a collaboration quest with the editorial team of Fami weekly magazine!
• Next add-on quests are scheduled to be released on 21st October (Thursday)

I've not even touched the game yet and yet they're releasing new missions? Oh come on. At least let gamers cope up with all the A-title games available in the market. I guess that's the gamer's dilemma: lots of great games are out yet you can't play them all.

Anyway, if you'll notice, one mission in the Lord of Arcana DLC pack is titled "Fami tsuu" which reads and sounds exactly like Famitsu the Japanese magazine. It's lying dead smack in your face. If you didn't figure that out by reading the description above, I don't know what to call you.

And to reiterate again, free Lord of Arcana DLC pack now available for download at the Playstation Network. Get it while it's still hot.