Home » Smartphones » My Christmas Wish This Year: A Nokia C7

My Christmas Wish This Year: A Nokia C7

Well, Christmas is coming at us very fast. Last time I watched the news they announced that we're just 85 days away until December 25. Now it's just a couple of days to go. Very fast indeed.

As of yet, I haven't still thought of a Christmas gift for myself. Maybe because I'm too old for Christmas gifts (although I'm just 22 years old). Or maybe because I have everything I want currently. But see, an email arrived to me basically saying "Hey! You don't have everything you want yet! You haven't held an up-to-date cellphone for years now!" Suddenly, and on second thought, I wanted a new cellphone.
The email sported one of Nokia's latest phone models – the Nokia C7. I clicked on the link and studied the Nokia C7 well. And then I asked myself, "Do I want a Nokia C7 for Christmas?" My answer: DEFINITELY YES! YES! YEEEEEEEEEES!

I want and I do deserve a Nokia C7 this Christmas. Why? Because I had my Nokia 2230 for years now. My Nokia 2230, I've been through hell and back with it. It suffered water damage, wear and tear, and lots of considerable 3-foot drops too! The thing is, Nokia builds phones so well that even to most basic ones last for years – that's a fact. And they're built so well they're difficult to get broken therefore it's very hard to dispose of if I want to get a new phone.
Although my Nokia 2230 is still functional for everyday living and is able to keep up with my daily needs, I honestly think that it belongs in an era where push-button phones were the "IN" thing. Yeah sure I don't mind all those teenagers donning touch-screen phones everywhere. I mean, these touch-screen phones are so ubiquitous even a blind man can see one crystal clear. And I can't help but think, "What if I had one of those?"  Sometimes I can't help but get a little bit insecure. And what better replacement than a touch-screen, state-of-the-art, widget-filled Nokia C7!
See, the very first thing that caught my eye when I viewed the Nokia C7 was its very gorgeous design. It was totally love at first sight. Who wouldn't fall in love with such a beauty? And a 3.5" 16.7 million colors high-resolution screen? Man that's totally going to blow your mind. Compare that to the 1.8" 65,000 colors screen of my 2230. I can't even fathom the difference. Wait, don't tell me that I'm in the Stone Age. And that's just the outside yet. Its too mind-boggling to study the whole specifications page of the Nokia C7. All that specs jargon basically for me spells "YES I WANT THIS PHONE!" 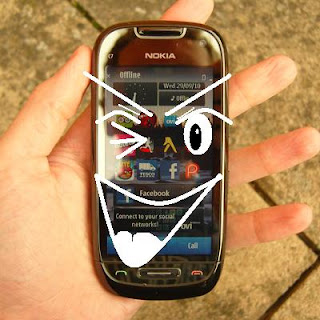 Another one: I'm a music and game dude. I love gadgets that let you play music and games at the same time. That's why I always carry around my PSP with me. It plays MP3s, movies, lets me surf the internet and play games whenever, wherever. But the Nokia C7, man. It not only supports multiple formats of music files, it not only lets you play touch-screen games, it not only plays movies (and YouTube videos), it not only lets you surf the net. What it does is, it's everything I want in a gadget. I can't start to enumerate all the features of it I love because if I did, it will eat most of the space in this page (don't let me start on how this sweet piece of machinery has a dedicated Facebook application and how it is one of the first smartphones to have the latest Bluetooth 3.0 technology. High speed transfers yay!). So basically it's goodbye PSP hello Nokia C7!


Finally, one thing (nails in the coffin) that my PSP can't ever ever ever do in its entire lifetime is to call people and send MMS and SMS messages. What's a phone without real phone features? The Nokia C7 – like I said – is everything I want in a gadget. Makes me ask myself, "Whoa, is this a phone?" Well, it is. It's one state-of-the-art device. Scratch that. It's one state-of-the-art device that I want this Christmas. The Nokia C7, perfect for an on-the-go guy like me.
To check out how fantastic the Nokia C7 is, click HERE.

(Photos by Nokia.com and Noknok.com)