What's Pocket God anyway? Well, if you've ever played those god RPG games on your computer, then you'll be probably be familiar with this one too. 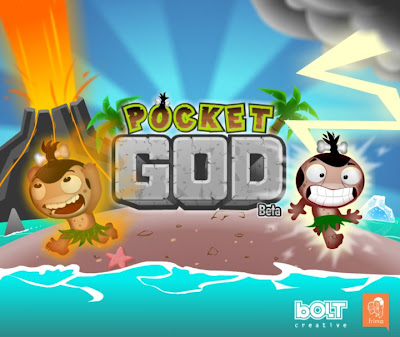 Pocket God lets you be god over your patches of land complete with creatures called Pygmies. You can take care of them, kill them, hit them with lightning, turn them upside-down, cast upon them a rain of refrigerators and whatever your mind pleases. Whatever you want to do, you can do to your Pygmies (almost). Anyway, you'll never run out of Pygmies as long as you play enough. The more you play, the larger the island you control becomes, therefore spawning more Pygmies for you to have fun time with.

Your first actual god powers would be those of gravity and lightning elements. But as you progress through the game (and kill thousands of Pygmies along the way for completion of quests) you'll gain new powers like the ability to summon a tornado. You'll also be able to design your island with trees, Pygmy-eating plants, and sharks (no aliens?)

Just like in the iPhone version, Facebook's Pocket God is all about the life and death cycle. You kill some, you get some. Aside from new powers, exclusive features include female Pygmies and the ability to sacrifice your Facebook friends. Hah. Perfect for revenge, yes?

Just be noted that Pocket God will post messages on your wall every now and then after each session. You can turn it off however at your Privacy Settings.

Anyway, if you're looking for Pocket God cheats or hacks, I doubt there's any yet if it concerns the infamous Cheat Engine. There's lots of glitches in Pocket God though. Some of it are listed below credits to the code submitters of latestvideogamecheats.com: 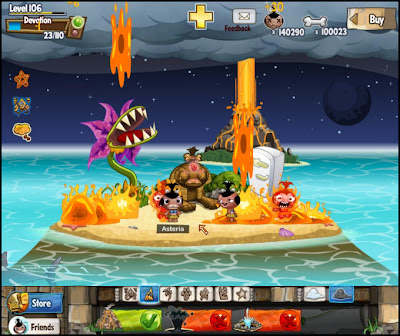 Tap the arrow at the top left of the screen at any island. Then, tap the logo of three stars. Tap the star two spaces below it, then tap the view on the bar that reads “Pocket God Comic Pre-Order Bonus”. — Press “Enter” and type journey to uranus.

Lightning without the clouds

turn on overcast/thunderclouds while playing ooga jump. the blue sky and clouds will be replaced with either a white or dark grey screen (depending on the time of day)

Put it on the storm setting and have a bunch of pygmies on the island. Then hit the red gem on the statue three times (x3). Then you want to create a hurricane (Don’t let the pygmies get sucked though). Once that is done they should be something like spirits.

To Get Out Of Spirit Mode

Make it night time and make the bat bit one or all of them. Once they’re vampires make it day time and that’s how you get out of the Spirit Glitch.

Ghost in a story

Go on to create story and when making your story make someone explode and then straight after make an earthquake which will make the person who explode come back as a ghost.

What you do is u put it to sunset put a pygmy and make sure u have fire wood turn ur ipod upsidedown so the pygmy dies and the wood comes back add another pygmy build your OWN fire, turn it to storm zap the dodo, put the burnt bird on the NOT lit fire , drag the pygmy to fire wood then he should build the fire then he’ll eat the bird but when he picks it up he will pick a sleeping pygmy, choke on the pygmy and fall into the water EXTRA: pick up the stone or meteor put it over the sun to create an eclipse(make sure a pygmy is on the edge of the island!), drop it and should go through the pygmy and island:D!

Go to apes mountain with two guys put one guy in the torture thing and the other guy on the the thing that controls it. Pull the guy until he dies the go strait to the map and go to the ice place the guy should be in the igloo make him dance a little then try and get him out of the igloo when he gets out he will disappear!

Spider but no spider

Go to the zombie island and put a Pygmy in the spider web. Leave him there until he starts to squirm.make a tidal wave, then go to the volcano island. He should be in the tree with no spiders web!it might work on other islands,I don’t know.

When in ooga jump turn on the thunder cloud on and off repeatedly and your pygmy does a strange dance.